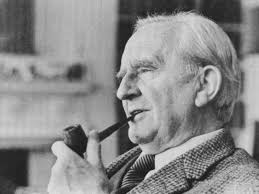 Go not to the elves for counsel, for they will say both yes and no.

John Ronal Reuel Tolkien: born on 3 January 1892 with Sun in Capricorn, Moon in Pisces and Ascendant in Virgo, author of The Hobbit and The Lord of the Rings. His family had its roots in Saxony (Germany), but had been living in England since the 18th century. The surname Tolkien is anglicised from Tollkiehn (i.e. German tollkühn, “foolhardy”).

His books, although written long before, became immensely popular in the 1960s and have remained so ever since, ranking Tolkien as one of the most popular and successful fiction writers of the twentieth century. Tolkien had a deep attraction for both contemporary and ancient languages, as well as for the creation of artificial languages such as Quenya and Sindarin.
Quotes:
I am told that I talk in shorthand and then smudge it.
I don’t know half of you half as well as I should like; and I like less than half of you half as well as you deserve.
If more of us valued food and cheer and song above hoarded gold, it would be a merrier world.
It does not do to leave a live dragon out of your calculations, if you live near him.
It’s the job that’s never started takes longest to finish.
Not all who wander are lost.

Solemnity of the 3rd Day

This is a day devoted to the Third Stage of the Basic Ritual of the Sacred Cone, in which the celebrants detach themselves from the interaction of the First and Second Stages, allowing them to align with the Core Multidimensional Identity.