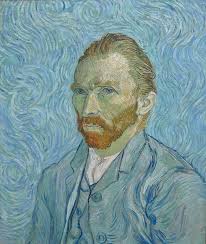 I dream my painting, and then I paint my dream.

Vincent Willem van Gogh: born on 30 March 1853, in the south of the Netherlands, with Sun in Aries, Moon in Sagittarius and Ascendant in Cancer (1.9.4), he is one of the greatest painters as well as a major shamanic artist and channeler of non-HAC elements. The objects of his art are depicted according to a non-ordinary perception, with vividly coloured auric fields and distorted shapes. In his youth he had a profound calling to be useful, heal and be in God’s service, which led him to work as a lay missionary, living a life of extreme solidarity with the poors, sleeping on the floor and giving away all his belongings. His commitment was so radical that the church dismissed him, and he then decied to become an artist. As a result of his exposure to non-HAC realities, he suffered regular breakdowns and psychic attacks in HAC, and was often considered mad. Nevetheless, during his secluded staying in psychiatric hospitals, he managed to produce more than 150 paintings. He killed himself and his fame grew only after his death.

I often think that the night is more alive and more richly colored than the day.

If you hear a voice within you say “you cannot paint,” then by all means paint, and that voice will be silenced.

The best way to know God is to love many things.

The more I think about it, the more I realize there is nothing more artistic that to love others.

When I have a terrible need of – shall I say the word – religion. Then I go out and paint the stars.

Joachim of Fiore, also known as Joachim of Flora and in Italian Gioacchino da Fiore (c. 1135 – March 30, 1202), was the founder of the monastic order of San Giovanni in Fiore (now Jure Vetere). He was a mystic, a theologian and an esoterist. His followers are called Joachimites.

Tracy Chapman: born on 30 March 1964, with Sun in Aries and Moon in Scorpio, she is an American singer and songwriter, popular for her bestselling singles “Fast Car”, “Baby Can I hold You” and “Give Me One Reason”.

Gospel of Thomas: (81) Jesus said: He who has become rich, let him become king, and he who has power let him deny.