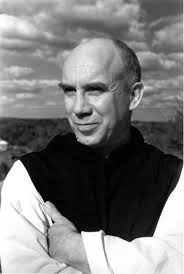 The beginning of love is the will to let those we love be perfectly themselves, the resolution not to twist them to fit our own image. If in loving them we do not love what they are, but only their potential likeness to ourselves, then we do not love them: we only love the reflection of ourselves we find in them

Thomas Merton, born on 31 January 1915, Sun in Aquarius, Moon in Leo, American author and RC monk (d. 1968). He wrote more than 70 books on spirituality and social justice. He was a promoter of interfaith dialogue and a most inspiring being. (11.5)

If you want to identify me, ask me not where I live, or what I like to eat, or how I comb my hair, but ask me what I am living for, in detail, ask me what I think is keeping me from living fully for the thing I want to live for.
But there is greater comfort in the substance of silence than in the answer to a question.
You do not need to know precisely what is happening, or exactly where it is all going. What you need is to recognize the possibilities and challenges offered by the present moment, and to embrace them with courage, faith and hope.
Do not depend on the hope of results. You may have to face the fact that your work will be apparently worthless and even achieve no result at all, if not perhaps results opposite to what you expect. As you get used to this idea, you start more and more to concentrate not on the results, but on the value, the rightness, the truth of the work itself. You gradually struggle less and less for an idea and more and more for specific people. In the end, it is the reality of personal relationship that saves everything.
To allow oneself to be carried away by a multitude of conflicting concerns, to surrender to too many demands, to commit oneself to too many projects, to want to help everyone in everything, is to succumb to the violence of our times.
Peace demands the most heroic labor and the most difficult sacrifice. It demands greater heroism than war. It demands greater fidelity to the truth and a much more perfect purity of conscience.
The light of truth burns without a flicker in the depths of a house that is shaken with storms of passion and fear.
Finally I am coming to the conclusion that my highest ambition is to be what I already am. That I will never fulfill my obligation to surpass myself unless I first accept myself, and if I accept myself fully in the right way, I will already have surpassed myself.

We move from part to whole and back again, and in that dance of comprehension, in that amazing circle of understanding, we come alive to meaning, to value, and to vision: the very circle of understanding guides our way, weaving together the pieces, healing the fractures, mending the torn and tortured fragments, lighting the way ahead — this extraordinary movement from part to whole and back again, with healing the hallmark of each and every step, and grace the tender reward.
In fact, at this point in history, the most radical, pervasive, and earth-shaking transformation would occur simply if everybody truly evolved to a mature, rational, and responsible ego, capable of freely participating in the open exchange of mutual self-esteem. There is the “edge of history.” There would be a real New Age.

Omraam Mikhael Aivanhov: Sun and Moon in Aquarius, Ascendant in Scorpio, born on 31 January 1900 in Srpci, Macedonia with Sun and Moon in Aquarius, and Ascendant in Scorpio, died on 25 December 1986 in France. He was an alchemist, mystic, astrologer and spiritual master in the tradition of the Great White Brotherhood. His teaching is mainly drawn from the Christian esoteric path and is presented through 74 volumes. (11.11.8)
Whatever your trials, remind yourself that you are a spirit and are capable of changing your destiny.
Instead of looking for love, give it; constantly renew it in yourself and you will always feel its presence within you. It will always be there smiling at you, gazing on you kindly.

Grant Morrison Sun Aquarius, Moon Pisces, born 31 January 1960 in Glasgow, is a Scottish comic book writer and playwright. Known for his nonlinear narratives and counter-cultural leanings, as well as his successful runs on titles like Animal Man, Doom Patrol, JLA, The Invisibles, New X-Men, Fantastic Four, All-Star Superman, and Batman. (11.12)
Real life? What’s that?
The world’s at a crisis point and it’s time to stop bullshitting around with Qabalah and Thelema and Chaos and Information and all the rest of the metaphoric smoke and mirrors designed to make the rubes think magicians are “special” people with special powers. It’s not like that. Everyone does magic all the time in different ways. “Life” plus “significance” = magic.