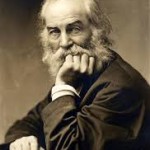 I celebrate myself, and sing myself, And what I assume you shall assume, For every atom belonging to me as good belongs to you. I loafe and invite my soul, I lean and loafe at my ease observing a spear of summer grass.” “I believe in the flesh and the appetites, Seeing, hearing, feeling, are miracles, and each part and tag of me is a miracle. Divine am I inside and out, and I make holy whatever I touch or am touched from, The scent of these armpits aroma finer than prayer, This head more than churches, bibles, and all the creeds.

It is a beautiful truth that all men contain something of the artist in them. And perhaps it is the case that the greatest artists live and die, the world and themselves alike ignorant what they possess.

I am a man who, sauntering along without fully stopping, turns a casual look upon you and then averts his face, Leaving it to you to prove and define it, Expecting the main things from you.

Huston Smith (May 31, 1919 – December 30, 2016) religious studies scholar in the United States. His book The World’s Religions (originally titled The Religions of Man) sold over two million copies and remains a popular introduction to comparative religion.

“If we take the world’s enduring religions at their best, we discover the distilled wisdom of the human race.”
“Institutions are not pretty. Show me a pretty government. Healing is wonderful, but the American Medical Association? Learning is wonderful, but universities? The same is true for religion… religion is institutionalized spirituality.”