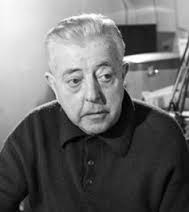 Jacques Prévert: with Sun in Aquarius and Moon in Aries, born on 4 February 1900, died 11 April 1977. One of the most popular French poets and cinema screenwriters of the 20th century, associated with surrealism and Pataphysics, He wrote various screenplays for French film director Marcel Carné, such as Drôle de drame (Bizarre, Bizarre), Le jour se lève (Daybreak) and Les enfants du paradis (The Children of Paradise). The latter movie is one of the greatest romantic classics of all times. It is about four men in love with Garance, a worldly-wise courtesan. Each men loves Garance in his own way, yet only the intentions of Deburau, a mime-actor, appear honourable. Consequently Deburau is the one who moves through the ordinary reality bardo compost bin, facing one grievance after the other in order to attain a forlorn goal. The movie is an outstanding celebration of the grief and sadness generated by love relationships. “Oh,” declares one of the protagonists, “if everyone who was married was in love, the earth would shine like the sun.”

The Dead Leaves by Jacques Prévert:
Oh I wish so much you would remember those happy days when we were friends.
Life in those times was so much brighter and the sun was hotter than today.
Dead leaves picked up by the shovelful. You see, I have not forgotten.
Dead leaves picked up by the shovelful, memories and regrets also, and the North wind carries them away into the cold night of oblivion.
You see, I have not forgotten the song that you sang for me: It is a song resembling us.
We lived together, the both of us, you who loved me and I who loved you.
But life drives apart those who love ever so softly without a noise and the sea erases from the sand the steps of lovers gone their ways.

Gabrielle Roth (11.2) (February 4, 1941 – October 22, 2012) American dancer and musician in the world music and trance dance genres, with a special interest in shamanism. She created the 5Rhythms approach to movement in the 1960s; there are now hundreds of 5Rhythms teachers worldwide who use her approach in their work.

Fernand Léger, (11.1.3) Sun in Aquarius, Moon in Aries, Ascendant in Gemini. French painter, sculptor and filmmaker, born in Argentan, Orne, February 4, 1881, died August 17, 1955.  He ranks as one of the main representative of Cubism and is regarded as a forerunner of Pop art. In his paintings he employs pure colours, converting forms into geometric features of cones, spheres and cubes, leaving their contours unbroken. Picture: The Bargeman.