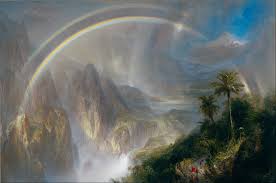 I know you’ll think this is crazy, but all I want to do is hold you, and I think that if you’ll let me do that just for a few seconds, I can walk away, and never speak to you again.

David Guterson, born on 4 May 1956, American writer, Sun in Taurus and Moon in Capricorn.

Image by Frederic Edwin Church, born on 4 May 1826, Sun in Taurus and Moon in Aries, American painter.

LOVE, who now deals to human hearts,
Such ill thrown, yet resistless darts,
That hapless mortals can’t withstand them,
Was once less cruel and perverse,
Nor did he then his shafts disperse,
So much at random.

It happened, that the thoughtless child
Was rambling thro’ a flowery wild,
Like idle lad in school vacation;
Where sauntering now, and now at rest,
Stroll’d Folly, who to Love address’d
His conversation.
On trifles he had much to say,
Then laughing he propos’d to play,
And stake against Love’s bow his bauble;
The quiver’d gamester smil’d and won,
But testy Folly soon began
To fret and squabble.

Loud and more loud the quarrel grows;
From words the wranglers went to blows,
For Folly’s rage is prompt to rise;
Till bleeding Love a martyr stood­
A stroke from Folly’s weapon rude,
Put out his eyes.
Then wild with anguish, Venus pray’d,
For vengeance on the idiot’s head,
And begg’d of cloud-compelling Jove,
His swiftest lightening, to destroy,
The mischievous malignant boy
That blinded Love.

‘Folly is immortal,’ Jove replied,
‘But, tho’ your prayer must be denied,
‘An endless penance is decreed him;
‘For Love, tho’ blind, will reign around
‘The world; but still where-ever found,
‘Folly shall lead him.’