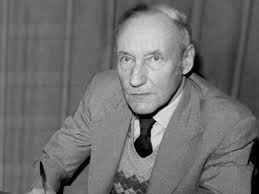 Language is a virus from outer space. (William Burroughs)

If something or someone does not have a word, it does not exist.

What comes first, the world we see and hear, or the language?

“In the beginning was the Word, the Word was with God and the Word was God.” recites the prologue of the Gospel of John.

From a shamanic and multidimensional perspective, everything you see and hear, the whole physical reality, including your own body, as well as the passing of time, is a hypnotic spell produced by language.

William Burroughs, born on 5 February 1914 (Sun and Ascendant in Aquarius, Moon in Gemini), is one of the most influential non-ordinary American novelists and a major exponent of the Beat Generation literary movement. He was the inventor of the cutup, a collage technique applied to prose writing in which the writer literally cuts up and recombines text, revelling new meanings and insights resulted from chaotic texts. He believed that “the only way to find out what people were really saying was to cut up their words and get at the meanings hidden inside” Burroughs was convinced that humans were so conditioned by language that even that which they believed to be physical perception was in fact a hallucination. He maintained that human speech was the result of a virus, contracted by our ancestors. Burroughs was an ardent explorer of multidimensional border zones. Rather than repress those dark areas, he expressed them through his writing. His life was an ongoing journey of liberation from our separated reality.

Quotes by Burroughs:
A paranoid is someone who knows a little of what’s going on.
Admittedly, a homosexual can be conditioned to react sexually to a woman, or to an old boot for that matter. In fact, both homo – and heterosexual experimental subjects have been conditioned to react sexually to an old boot, and you can save a lot of money that way.
Artists to my mind are the real architects of change, and not the political legislators who implement change after the fact.

Desperation is the raw material of drastic change. Only those who can leave behind everything they have ever believed in can hope to escape.

Most of the trouble in this world has been caused by folks who can’t mind their own business, because they have no business of their own to mind, any more than a smallpox virus has.
There couldn’t be a society of people who didn’t dream. They’d be dead in two weeks.
Which came first the intestine or the tapeworm?

Gospel of Thomas: (28) Jesus said, “I took my place in the midst of the world, and I appeared to them in flesh. I found all of them intoxicated; I found none of them thirsty. And my soul became afflicted for the sons of men, because they are blind in their hearts and do not have sight; for empty they came into the world, and empty too they seek to leave the world. But for the moment they are intoxicated. When they shake off their wine, then they will repent.”