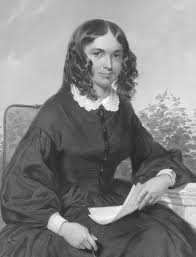 If thou must love me, let it be for nought
Except for love’s sake only. Do not say
“I love her for her smile —her look —her way
Of speaking gently,—for a trick of thought
That falls in well with mine, and certes brought
A sense of pleasant ease on such a day” –
For these things in themselves, Beloved, may
Be changed, or change for thee,—and love, so wrought,
May be unwrought so. Neither love me for
Thine own dear pity’s wiping my cheeks dry,—
A creature might forget to weep, who bore
Thy comfort long, and lose thy love thereby!
But love me for love’s sake, that evermore
Thou may’st love on, through love’s eternity. 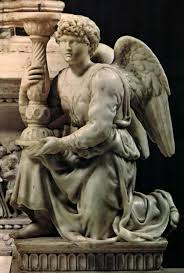 Michelangelo Buonarroti: born on 6 March 1475, Sun and Moon in Pisces, and Ascendant in Sagittarius, “il divino Michelangelo” (the divine Michelangelo) is one of the most talented and influential artists of the Renaissance. He is the author of the Pietà in St. Peter’s basilica in Rome, of the Sistine Chapel ceiling frescoes, the Moses, the David, the designer of the dome for St. Peter’s and the Capitoline Square. For Michelangelo, the task of the sculptor involves releasing the forms that are already inside the stone, which are perceived by the artist as living creature. One anectdote reveals that upon completing the Moses Michelangelo hit the knee of the statue with a hammer and shouted, “Why don’t you speak to me?” Another story refers to Pope Paul III’s master of ceremonies, who was constantly pestering Michelangelo for a glimpse of his Last Judgment fresco in the Vatican’s Sistine Chapel. When the work was finally unveiled, the master of ceremonies found himself depicted among the damned in hell. Appalled, the man complained to the pope, who refused to intervene declaring. “God has given me authority in Heaven and on Earth, but my writ does not extend to Hell.” Michelangelo regarded art as a partner and lover. To those who asked him why he did not marry and have children he replied “I have too much of a wife in this art of mine, which has afflicted me throughout my life, and my children shall be the works I leave.”

I saw the angel in the marble and carved until I set him free.
Death and love are the two wings that bear the good man to heaven.
If we have been pleased with life, we should not be displeased with death, since it comes from the hand of the same master.
Lord, grant that I may always desire more than I can accomplish.
My soul can find no staircase to Heaven unless it be through Earth’s loveliness.
The greater danger for most of us lies not in setting our aim too high and falling short; but in setting our aim too low, and achieving our mark.

Samael Aun Weor (March 6, 1917 – December 24, 1977), born Víctor Manuel Gómez Rodríguez, Colombian citizen and later Mexican, author, lecturer and founder of the ‘Universal Christian Gnostic Movement’ with his teaching of ‘The Doctrine of Synthesis’ of all religion.

ACIM: 65. My only function is the one God gave me.

Gospel of Thomas: (57) Jesus said, “The kingdom of the father is like a man who had good seed. His enemy came by night and sowed weeds among the good seed. The man did not allow them to pull up the weeds; he said to them, ‘I am afraid that you will go intending to pull up the weeds and pull up the wheat along with them.’ For on the day of the harvest the weeds will be plainly visible, and they will be pulled up and burned.”