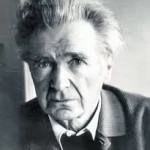 The more we try to rest ourselves from our Egos, the deeper we sink into it.

E. Cioran: born on 8 April 1911 in Romania, in the Transylvanian town of Rasinari, with Sun in Aries and Moon in Leo (1.5), died on 20 June 1995, Cioran was one of my most inspiring teachers. In my 20s I was particularly inspired by Cioran’s ecstatic pessimism, humourous nihilism, enlightened alienation, exalted boredom, blissful agony and sense of futility, which all coincided with my pragmatic experience of life. I had never met anyone providing such an authentic, genuine and honest description of life. For the first time I could sense an extreme resonance, realising that it was possible to translate non-ordinary experiences into ordinary language.

Cioran spent most of his life in France where he wrote most of his works, such as Précis de décomposition (A Short History of Decay), La tentation d’exister (The Temptation to Exist), La chute dans le temps (The Fall into Time), Le mauvais démiurge (The New Gods), De l’inconvénient d’être né (The Trouble With Being Born), Écartelèment (Drawn and Quartered). I was first drawn to Cioran primarily because of the intriguing nature of his titles, which then became major milestones on my path. Unfortunately only very few of his works have been translated in English.

Quotes:
The ideally lucid, hence ideally normal, man should have no recourse beyond the nothing that is in him
Existing is plagiarism.
True moral elegance consists in the art of disguising one’s victories as defeats.
The only profitable conversations are with enthusiasts who have ceased being so—with the ex-naïve… Calmed down at last, they have taken, willy-nilly, the decisive step toward knowledge— that impersonal version of disappointment.
As long as I live I shall not allow myself to forget that I shall die; I am waiting for death so that I can forget about it.
We smile, because no answer is conceivable, because the answer would be even more meaningless than the question.
A golden rule: to leave an incomplete image of oneself.
Anyone who speaks in the name of others is always an imposter.
By all evidence we are in the world to do nothing.
Consciousness is much more than the thorn, it is the dagger in the flesh.
For you who no longer posses it, freedom is everything, for us who do, it is merely an illusion.
I’m simply an accident. Why take it all so seriously?
If we could see ourselves as others see us, we would vanish on the spot.
Isn’t history ultimately the result of our fear of boredom?
Life is merely a fracas on an unmapped terrain, and the universe a geometry stricken with epilepsy.
Life is possible only by the deficiencies of our imagination and memory.
No one recovers from the disease of being born, a deadly wound if there ever was one.
Our works, whatever they may be, derive from our incapacity to kill or to kill ourselves.
Progress is the injustice each generation commits with regard to its predecessors.
Reason is a whore, surviving by simulation, versatility, and shamelessness.
So long as man is protected by madness -he functions – and flourishes.
Society is not a disease, it is a disaster. What a stupid miracle that one can live in it.
Speech and silence. We feel safer with a madman who talks than with one who cannot open his mouth.
The desire to die was my one and only concern; to it I have sacrificed everything, even death.
The fact that life has no meaning is a reason to live – moreover, the only one.
The mind is the result of the torments the flesh undergoes or inflicts upon itself.
There is no means of proving it is preferable to be than not to be.
To Live signifies to believe and hope – to lie and to lie to oneself.
We define only out of despair, we must have a formula… to give a facade to the void.
We inhabit a language rather than a country.
What would be left of our tragedies if an insect were to present us his?

ACIM: 98. I will accept my part in God’s plan for salvation.

Gospel of Thomas: (90) Jesus said: Come unto me, for easy is my yoke and my lordship is gentle, and you shall find rest for yourselves.

Concise Epitome: 9.21 All this was sheer gibberish for the Handorians. It was filled with words (see italics) which were a total mystery for them. Moreover, and that was really too much, that time the Peak did not sing nor dance. (Questa delucidazione risultò pienamente astrusa per gli Handoriani. Non solo era colma di vocaboli mai uditi, ma sopra ogni cosa, e questo era davvero oltremisura, quella volta il Picco non cantò né danzò).