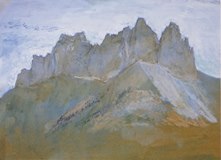 Do not think of your faults, still less of other’s faults; look for what is good and strong, and try to imitate it. Your faults will drop off, like dead leaves, when their time comes.

John Ruskin, born 8 February 1819, Sun and Ascendant in Aquarius, and Moon in Aries, English author (1819-1900) born in London. One of the greatest figures of the Victorian age. Artist, poet, author, critic and social revolutionary, he was especially famous for his work as art and social critic. He was particularly dear to Mahatma Gandhi, who described him as the single greatest influence in his life, Marcel Proust and Leo Tolstoy. Ruskin wrote over 250 works, which connected art history to science, literary criticism, environmental conditions, mythologyand other topics. His relationships were out of the ordinary and far beyond HAC understanding. Ruskin married Effie Gray, a childlike bride with whom he decided not to have any intercourse in order to preserve her virginity. A triangle developed involving the artist John Millais, whom Effie, after her marriage with Ruskin was annuled on grounds of non-consummation, later married. (11.4.11)

The greatest thing a human soul ever does in this world is to see something and tell what it saw in a plain way. Hundreds of people can talk for one who can think, but thousands can think for one who can see. To see clearly is poetry, prophecy and religion, all in one.

It is far more difficult to be simple than to be complicated; far more difficult to sacrifice skill and easy execution in the proper place, than to expand both indiscriminately.
Men cannot not live by exchanging articles, but producing them. They live by work not trade.
The highest reward for a person’s toil is not what they get for it, but what they become by it.

The sea is everything. It covers seven tenths of the terrestrial globe. Its breath is pure and healthy. It is an immense desert, where man is never lonely, for he feels life stirring on all sides. The sea is only the embodiment of a supernatural and wonderful existence. It is nothing but love and emotion; it is the Living Infinite.

Neal Cassady, (11.9.8) Sun Aquarius, Moon Sagittarius, Ascendant Scorpio. American writer (1926-1968), major figure of the Beat Generation of the 1950s and the psychedelic movement of the 1960s, he was the model for the character Dean Moriarty in Jack Kerouac’s novel On the Road. He is portrayed in John Byrum’s film, Heart Beat,

Proclus Lycaeus (8 February 412 – 17 April 487 AD), called “The Successor” or “Diadochos”, Greek Neoplatonist philosopher. He set forth one of the most elaborate and fully developed systems of Neoplatonism.

Martin Buber, (11.1.11) Austrian-born Israeli philosopher (February 8, 1878 – June 13, 1965) best known for his philosophy of dialogue, a form of religious existentialism centered on the distinction between the I-Thou relationship and the I-It relationship. In 1923 Buber wrote his famous essay on existence, Ich und Du (later translated into English as I and Thou).
“Solitude is the place of purification.”

William Bloom (11.11.4) born in 1948 in central London, British educator and author in the field of holistic development. He now lives and works in Glastonbury. Since the late 1970s Bloom’s writing and teaching have reflected his interest in new approaches to exploring consciousness and spirituality. His holistic background includes a two-year spiritual retreat living amongst the Saharan Berbers in the High Atlas mountains. His diary of this period was published as The Sacred Magician. He has also spent over 20 years on the faculty of the Findhorn Foundation. In 1988 William co-founded and was for 10 years director of the Alternatives Programme at St James’ Church, Piccadilly. He is a meditation teacher and he teaches and runs workshops internationally. He has appeared on radio and television programmes including “The Moral Maze” and “The Soul of Britain.” In 1999, he founded Holistic Partnerships, an educational and training consultancy that particularly works with the material of his book “The Endorphin Effect.”

ACIM: 39. My holiness is my salvation.

Gospel of Thomas: (31) Jesus said, “No prophet is accepted in his own village; no physician heals those who know him.”

Concise Epitome: 4.8 We ask ourselves what is the point and why? How is it possible to be flippant in  darkness? (Proprio qual è il senso e perché ci domandiamo! Com’è possibile nel buio celiare?A che pro?)