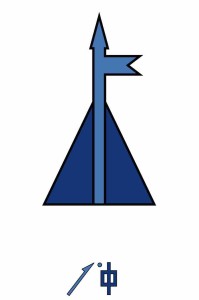 “When we dream alone it is only a dream, but when many dream together it is the beginning of a new reality.” (Friedensreich Hundertwasser)

In the Astroshamanic Binary System, Sun in Sagittarius (9) and Moon in Capricorn (10) constitute Binary 9.10, or Binary number 106.

9.10 (Sun in Sagittarius and Moon in Capricorn) blends mutable fire with cardinal earth, integrating Sagittarius’s adventure, expansion, freedom and thirst for truth with Capricorn’s ambition, discipline, and pragmatism. These folks have abundant confidence and can achieve roles of great prominence in life. Orchestrating optimism, laughter, enthusiasm, sense of direction with pragmatism, ambition, integrity and shrewdness, they can easily deal with the marketplace of life and manifest outstanding results, yet with a large smile in their face.

Sun in Sagittarius and Moon in Capricorn form a semi-sextile (30°) aspect, connecting two consecutive signs, which are most different energies, yet closely linked. The signs involved can work well together as long as they keep their integrity. The first sign, in this case Sagittarius  sets the process in motion, and the second (Capricorn) follows.

Astroshamanic Seal: This seal brings awareness that beyond darkness there is light, no matter whether all that we can see is darkness. It is a deeply healing seal.

John Milton, (9.10.9) English poet, born in London on 9 December 1608, he is a double Sagittarius (Sun and Ascendant in Sagittarius) and Moon in Capricorn, best-known for his epic poem Paradise Lost. Milton was married three times. Some of these marriages generated a lot of grievances, which prompted Milton to write various essays on divorce. The theme of separation, HAC and non-HAC, soul fragmentation, fall and loss of unity were dominant in his life and lead to the production of the huge Paradise Lost. The poem narrates a story of Adam and Eve, with God, and Lucifer, who is thrown out of Heaven to corrupt humankind. Milton depicted a powerful and attractive portrait of Lucifer, abundant with metaphysical and inspired nihilism. Here Satan appears as the real hero and rebel against the tyranny of Heaven. Yet this is covert and Milton does not appear to take the Devil’s side.

Assuredly we bring not innocence not the world, we bring impurity much rather: that which purifies us is trial, and trial is by what is contrary. Better to reign in hell than serve in heav’n. He that has light within his own clear breast May sit in the centre, and enjoy bright day: But he that hides a dark soul and foul thoughts Benighted walks under the mid-day sun; Himself his own dungeon.

Truth never comes into the world but like a bastard, to the ignominy of him that brought her birth.

Daniel Keys Moran, (9.10) American sci-fi writer 30 November 1962. The Living Flame is a force of life which can be “brought down” into the mundane world by gifted individuals, mostly through dancing. As of the most recent stories it is unknown what effects the flame has apart from giving the witnesses a deep feeling of spirituality. Denice Castanaveras is, as of the end of “The Last Dancer” the only person alive who knows how to invoke the flame.

“When we dream alone it is only a dream, but when many dream together it is the beginning of a new reality.”

Osho: previously known as Bhagwan Shree Rajneesh, born on 11 December 1931 with Sun in Sagittarius, Moon in Capricorn and Ascendant in Gemini, (9.10.3; Saturn Vessel, Neptune Root). This was indeed for me one of the greatest man I can think and feel of. Since his childhood he emerged as a most rebellious and free spirit, stressing the importance of searching for truth through direct experience rather than borrowing it from consensus reality or others. “Experience life in all possible ways” he says “- good-bad, bitter-sweet, dark-light, summer-winter. Experience all the dualities. Don’t be afraid of experience, because the more experience you have, the more mature you become.”

Throughout all his life Osho focused on developing tools for human expansion of awareness and for bridging the zone between HAC and non-HAC. He read copiously to broaden his understanding of human belief systems and in his countless speeches dealt with every aspect of life. His talks have been published in more than 600 volumes and translated in over 30 languages. ”My message is not a doctrine,” he says “not a philosophy. My message is a certain alchemy, a science of transformation, so only those who are willing to die as they are and be born again into something so new that they cannot even imagine it right now… only those few courageous people will be ready to listen, because listening is going to be risky. Listening, you have taken the first step towards being reborn. So it is not a philosophy that you can just make an overcoat of and go bragging about. It is not a doctrine where you can find consolation for harassing questions. No, my message is not some verbal communication. It is far more risky. It is nothing less than death and rebirth.”

Osho also employed a large variety of jokes, funny stories and controversial statements to sneak through HAC. “Seriousness is a sickness; your sense of humor makes you more human, more humble. The sense of humor – according to me – is one of the most essential parts of religiousness.” Laughter played a major role in his work  as well as cathartic and release. It is through Osho that I deepened my awareness of the power of the second stage.

The transcription on his Samadhi reads: Osho Never Born – Never Died. Only visited this planet earth between December 11, 1931 – January 19, 1990. Osho is no longer is a HAC body to shed light on the mysteries surrounding his life.

The perfectionist is bound to be a neurotic, he cannot enjoy life, until he is perfect. And perfection as such never happens, it is not in the nature of things. Totality is possible, perfection is not possible.

The heart is always right – if there’s a question of choosing between the mind and the heart – because mind is a creation of the society. It has been educated. You have been given it by the society, not by existence. The heart is unpolluted.

I have seen lovers promising each other that they will love each other forever and forever. And not knowing anything about the next moment! If they are a little alert, they will say: “It feels in this moment, it is a truth of this moment….”That is why lovers always prove to be deceivers to each other. In the end they think they have been cheated. They have both promised things which they cannot deliver.