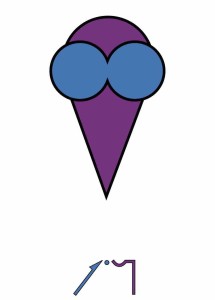 In the Astroshamanic Binary System, Sun in Sagittarius (9) and Moon in Aquarius (11) constitute Binary 9.11, or Binary number 107.

9.11 (Sun in Sagittarius and Moon in Aquarius) mixes mutable fire with fixed Air, integrating Sagittarius’s optimism, directness, enthusiasm, adventure and buoyancy with Aquarius’s sense of originality, inventiveness and freedom. Those resonating with this binary have the power to inspire people with their enthusiastic ideas and dashing creativity. Trustworthy, loyal and courageous, they often operate as major promoters of libertarian and revolutionary causes, assuming roles of leadership and spontaneously putting people together.

Sun in Sagittarius and Moon in Aquarius are in a sextile (60°) aspect, which involves two complementary signs, sharing the same polarity, yet not the same element. The binary can work harmoniously and provide beneficial opportunities as long as there is awareness and clarity of intention on both sides.

“Embrace your solitude and love it. Endure the pain it causes, and try to sing out with it. For those near to you are distant…” (Rilke, Sun in Sagittarius, Moon in Aquarius)

Reiner Maria Rilke (Sun Sagittarius, Moon Aquarius, Ascendant Virgo: 9.11.6) (4 December 1875 – 29 December 1926), Bohemian–Austrian poet, one of the most significant poets in the German language. His haunting images focus on the difficulty of communion with the ineffable in an age of disbelief, solitude, and profound anxiety. His best-known work is the Duino Elegies; his two most famous prose works are the Letters to a Young Poet and the semi-autobiographical The Notebooks of Malte Laurids Brigge.

“You must give birth to your images. They are the future waiting to be born. Fear not the strangeness you feel. The future must enter you long before it happens. Just wait for the birth, for the the hour of the new clarity.”

“I hold this to be the highest task of a bond between two people: that each should stand guard over the solitude of the other. ”

“Be patient toward all that is unsolved in your heart and try to love the questions themselves, like locked rooms and like books that are now written in a very foreign tongue. Do not now seek the answers, which cannot be given you because you would not be able to live them. And the point is, to live everything. Live the questions now. Perhaps you will then gradually, without noticing it, live along some distant day into the answer.”

“The purpose of life is to be defeated by greater and greater things.”

“Embrace your solitude and love it. Endure the pain it causes, and try to sing out with it. For those near to you are distant…”

“Love consists of this: two solitudes that meet, protect and greet each other. ”

“We need, in love, to practice only this: letting each other go. For holding on comes easily; we do not need to learn it.”

“The work of the eyes is done. Go now and do the heart-work on the images imprisoned within you.”

“Perhaps all the dragons in our lives are princesses who are only waiting to see us act, just once, with beauty and courage. Perhaps everything that frightens us is, in its deepest essence, something helpless that wants our love.”

Philip Kindred Dick (9.11.1; Sun Sagittarius, Moon Aquarius, Ascendant Aries; Uranus Instrument, Saturn Power) (December 16, 1928 – March 2, 1982) American science fiction writer. Novelist, short story writer and essayist whose published work is almost entirely in the science fiction genre. Dick explored sociological, political and metaphysical themes in novels dominated by monopolistic corporations, authoritarian governments and altered states. In his later works Dick’s thematic focus strongly reflected his personal interest in metaphysics and theology. He often drew upon his own life experiences in addressing the nature of drug abuse, paranoia and schizophrenia, and transcendental experiences in novels such as A Scanner Darkly and VALIS
When two people dream the same dream, it ceases to be an illusion.
‎”Each of us assumes everyone else knows what HE is doing. They all assume we know what WE are doing. We don’t…Nothing is going on and nobody knows what it is. Nobody is concealing anything except the fact that he does not understand anything anymore and wishes he could go home.”

Dr. Stylianos Atteshlis (9.11) (Στυλιανός Αττεσλής, known as Daskalos) (12 December 1912–1995) was a Christian mystic and healer who was born on December 12, 1912 in Cyprus where he spent most of his life. He was a mystic from Strovolos, Cyprus. Educated in Cyprus and abroad, he pursued a career in the Cyprus Government Printing office; but he also spent some years in Africa. For seventy years he had been teaching, trying to wake people out of their spiritual slumber. Although he was ready to help and heal wherever and whenever was needed. He set up the circle, “The Researchers of Truth.” The series of books which have been published are based on practice and meditation of Dr. Stylianos Atteshlis (Daskalos). Daskalos is the Greek word for teacher. Kyriacos Markides wrote three books about him: The Magus of Strovolos, Homage to the Sun, and Fire in the Heart. In these books, Stylianos Atteshlis was given the alias Spyros Sathi. Although Daskalos became widely known outside Cyprus through the books written by Markides it appears that Atteshlis (Daskalos) wanted to make it known that he had severed his relationship with Markides. Throughout his life Daskalos enjoyed composing and performing music (violin and piano), writing poetry, painting, gardening and studying languages. He is the author of a number of books. In the last years of his life, seekers of the truth from all over the world came to Stoa in Strovolos to hear his lectures and seek healing. On August 26, 1995, Dr. Stylianos Atteshlis died in Cyprus.