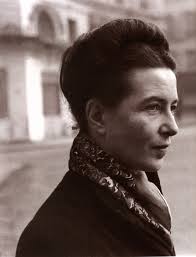 Self-consciousness is not knowledge but a story one tells about oneself.

Simone de Beauvoir: born on 9 January 1908 (10.12.8) with Sun in Capricorn, Moon in Pisces and Ascendant in Scorpio, she is a major representative of French existentialism, known for her work on non-ordinary relationships. In L’Invitée (She Came to Stay) she provides a chronicle of her menage a trois with Olga Kosakiewicz and J.P. Sartre. In Le Deuxième Sexe (The Second Sex) she refers to the social construction of women as the quintessential Other, arguing that “one is not born a woman; one becomes one”. For Beauvoir human existence is a paradoxical mixture of the internal freedom to transcend the conditioning of the world and the weight of the world which imposes itself on us in a manner outside of our control and not of our own choosing.

“In itself, homosexuality is as limiting as heterosexuality: the ideal should be to be capable of loving a woman or a man; either, a human being, without feeling fear, restraint, or obligation.” “Because we are separated everything separates us, even our efforts to join each other.” “Change your life today. Don’t gamble on the future, act now, without delay.”

Domenico Modugno: born on 9 January 1928 (10.5.3) with Sun in Capricorn, Moon in Leo and Ascendant in Gemini, Modugno is considered the father of Italian singer-songwriters (cantautori) and one of the greatest European singers. He became very popular in the world with his song Nel blu Dipinto di blu, better known as Volare, and indeed one of the most shamanic songs I have ever heard.

Giovanni Papini, born 9 January 1881, Sun in Capricorn, Moon in Taurus, Italian author. Life is not illusion nor fiction, but dreams and illusions are part of life, they are essential elements of reality; they are the highest, noblest and most dignified expression of life. Dreams are not dreams but life.

Gospel of Thomas: (1) And he said, “Whoever finds the interpretation of these sayings will not experience death.”