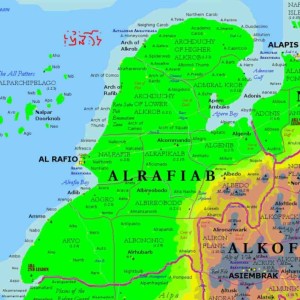 This is the nation of the first historical settlements and of the most ancient port town, Al Rafio, current capital, which takes its name from the national hero saint, Rafio, the hero who established the first settlements.

In the context of the Akirwa’s rough climatic scenario, Alrafiab is blessed with a mild weather and generous, abundant vegetation, which is also a feature of most of South-West Akirwa.

When the Pioneers emerged into Kirway they met all kinds of difficulties and ordeals. Once they reached the area of Alrafiab, they had the chance to rest and establish the first settlements.

Rafio is particularly famed for its drumming healing and empowering qualities for it was blessed by the Pristine Appearance of Rata Sahe Pah Sadoh, the Totem Spirit of Sector 2. Moreover, this Nation holds the keys of the mysteries regarding all primal issues on human one-to-one relationships. Hence this is the ideal place to journey for those who intend to receive no-nonsense, direct and unexpurgated guidance on the topic.