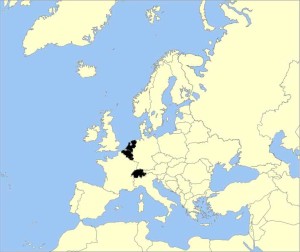 PTU Area D3, or Area of Tudro, corresponds to the State of Tudor and the Realm of Rodur in the Handorian States System Higher Earth and in the Rodnah Ierarkordo Lower Earth’s level of unary division respectively.

Birth Code: 23 January 1579 (the northern provinces of the Low Countries conclude the Union of Utrecht breaking with Spain; on 26 July 1581 they formally declared their independence with an Act of Abjuration; however, it was not until 30 January 1648 and the Peace of Westphalia that Spain recognized this independence)

Flag: three equal horizontal bands of red (top), white, and blue; similar to the flag of Luxembourg, which uses a lighter blue and is longer; the colors were those of WILLIAM I, Prince of Orange, who led the Dutch Revolt against Spanish sovereignty in the latter half of the 16th century; originally the upper band was orange, but because it tended to fade to red over time, the red shade was eventually made the permanent color; the banner is perhaps the oldest tricolor in continuous use

Just outside Amersfoort intersecting motorways come very close to marking the geographical centre of the Netherlands, a wood of large, old trees surrounds an old family estate. The earliest “castle” dates back to about 1410, but this was a significant distance from the current “chateau” which dates back to 1923. The foundation stone for the Gardens of Op de Haar, which are situated in the middle of the wood, was laid in 1958. The Belgen monument (near Amersfoort), dedicated to war victims, also claims to have been erected at the geographical centre of the Netherlands.

The Netherlands are part of the Provisional Order Primary Jurisdiction of Nederlie Pradesia.

Belgium comprises three regions: the Flemish Region (Flanders) and the Walloon Region (Wallonia) each comprise five provinces; the third region, Brussels-Capital Region, is neither a province, nor does it contain any. Together Belgium comprises 589 municipalities, which in general consist of several sub-municipalities (which were independent municipalities before a municipal restructuring in early 1977).

The geographical centre or Belgium is identified by two places: the traditional centre, marked by two grinding stones in front of the city hall, is in Ittre; a more recent centre is in Nil-Saint-Vincent-Saint-Marti, in the commune of Walhain, in the Brabant province. It is marked by a small pyramidal monument. The exact geographic figures are: 50°38’28” latitude North and 04°40’05” longitude East.

Liechtenstein is divided into 11 municipalities and is part of the Provisional Order Primary Jurisdiction of Austrie Providia, operated by the Austrie Neinve Prasamaya (Oesterreicher Bruderschaft).

Ettelbrück is located near the geographic center of Luxembourg and is a busy commercial center. Ettelbrück City Hall was designed by Luxembourg architect Sosthène Weis and was built in 1906. The State Archives building is a former military hospital (built in 1857) that later accommodated the few military forces granted to Luxembourg by the Treaty of London in 1867. The building was going to be demolished in the 1960s, but it was finally decided to move the State Archives there in 1968.

The tables below provide the geopolitical content of each PTU Region of PTU Area D3, indicating their geopolitical content with references to the corresponding provinces (for Belgium and the Netherlands) and cantons (for Luxembourg and Switzerland), and their ISO-codes (first column), the area in km² (second column), the estimated population (third column), the 2009 estimate amount of Sacred Cone Basic Implants (BI) in the fourth column and of Sacred Cone Sites (SC) in the fifth column, the Provisional Order (ProvO) Secondary Jurisdiction (sixth column), the capital or administrative HQ (seventh column). The final row includes the totals for each PTU Region, the PTU Region Capital and, when applicable, the Provisional Order emanation point.

The province of Atwerp is divided into three administrative arrondissements (arrondissementen in Dutch) containing 70 municipalities.

The province of Limburg is divided into three administrative arrondissements with 44 municipalities.

The Province of West Flanders is divided into 8 administrative arrondissements.

The Province of Liège is divided into 4 administrative arrondissements and 84 municipalities. Luxembourg province is divided into five administrative districts (arrondissements in French) containing 44 municipalities. The province also covers two regions (of Wallonia, one of the three actual official regions of Belgium) : the Ardennes on the north part and the Gaume on the south part.

The Brussels Region is divided into 19 municipalities, including the City of Brussels.

Aargau is divided into 11 districts.

Basel Country (Basel-Landschaft) is divided into 5 Bezirke and 86 municipalities.

Bern is divided into 26 districts and 398 municipalities.

Lucerne is divided into 5 districts termed Ämter and 88 municipalities.

D3-5-7 Bern, (all districts south-west of Bern, including Thun), CH-BE

Fribourg is divided into 7 districts.

Geneva is divided into 46 municipalities and does not have any district.

Jura is divided into 3 districts.

Neuchâtel is divided into 6 districts.

Valais is divided into 14 districts.

Vaud is divided into 10 districts

Glarus is divided into 25 municipalities

Schwyz is divided into six districts and 30 municipalities

Graubünden is divided into 11 districts.

Ticino is divided into 8 districts.