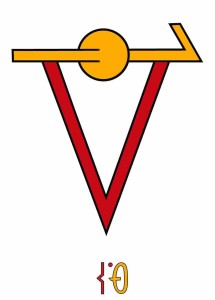 In the Astroshamanic Binary System Sun in Aries (1) and Moon in Cancer (4) constitute Binary 1.4, or Binary number 4.

Binary 1.4 is extremely adventurous, exciting, charismatic and vibrant with energy, capable of succeeding in many enterprises, while also of operating with cautiousness and sensitivity.

Both very independent and sensitive, it easily leaps into major enterprises and courageous adventures, without shunning its deep feelings and its need for authentic emotional security.

This binary is nourished by its luminous and inspiring connections from the past or by a profound incorporation of its heritage and roots. This can deeply motivate its initiatives and pioneering actions, triggering a radiant charisma.

Clannish, protective, devoted, traditional and at times romantic, it can provide unbending support to family or close group enterprises, especially when focus and high stamina are required.

This is a 1.4 First Quarter Moon occurring when the Crescent Moon in Cancer forms a square (Å), a 90° aspect, with the Sun in Aries. It is an active phase, when the Moon moves outside the orbit of the Earth toward that of Mars.

This is a time when we are confronted with the need to act out whatever was conceived during the New Moon, perhaps following a crisis, trial or obstacle. There may be tension and a sense of compulsion to do something about it here, triggering fear, anger and other grievances, conscious or unconscious.

The energy can be rather charged, making it the ideal moment to act out, take courageous initiatives, go for it, and do what feels right. Here you have the possibility to choose either to be a creative protagonist or a passive victim of events.

Breathing deeply, being aware of one’s body and physically releasing excessive tension through dynamic movements or shamanic postures while holding a focused Intent can be very helpful here, as well as practicing rituals, such as the Basic Ritual of the Sacred Cone.

Yet first of all on a First Quarter with Moon in Cancer and Sun in Aries, once it is a matter of releasing fear and procrastination, while definitely acting things out. There is a tremendous creative power at work, which needs expression, despite the temptation to keep holding or laying it. The chick has definitely hatched and needs space.

At this stage the time is usually ripe to be pragmatic and operate in accordance with your Intent, or whatever was identified as a goal during the New Moon. It is generally not a time for reflecting, withdrawing, thinking or visioning.

The question is: “What do I do right now to set in motion the Intention? What do I deeply desire?” The key here is not on taking time to get the right answer, which has been probably known for a while, or indulging with doubts and concerns. The key is on simply doing it, immediately acting out the answer, or even allowing the action to provide the answer.

Astroshamanic Seal: a “V” shape associated with Sector One (Aries), covered by a horizontal spear hitting an egg-shape representing Sector Four (Cancer). The seal portrays an initiatory death of the dysfunctional inner child aimed at incorporating its authentic nature and letting go of its separated identity. It is also related to the Epic Grahic Issues below.

Eli Roth (1.4.5) born April 18, 1972, American film director, producer, writer and actor, part of the group of filmmakers dubbed the Splat Pack, because of their association and their focus on the horror genre.

Gustav Fechner (1.4.7) April 19, 1801 – November 28, 1887, German experimental psychologist. An early pioneer in experimental psychology and founder of psychophysics, he inspired many 20th century scientists and philosophers. He is also credited to have created the formula “S = KLogI” that proved the existence of a scientific connection between the body and the mind.

Paula Cole (Saturn cjn Sun) born April 5, 1968 in Rockport, Massachusetts, American singer/songwriter. Her single “Where Have All the Cowboys Gone” reached the top ten of the Billboard Hot 100 in 1997.

Aretha Franklin (1.4.8) born March 25, 1942, American R&B, Pop and Gospel singer, songwriter, and pianist, called for many years “The Queen Of Soul”, generally regarded as one of the top vocalists ever, due to her ability to inject whatever she may be singing about with passion, soul and sheer conviction.

Ezra Koenig (born April 8, 1984) American musician, singer and songwriter. He is the lead singer and guitarist of the indie rock band Vampire Weekend.

Teddy Pendergrass (Uranus cjn Moon) March 26, 1950 – January 13, 2010, American R&B/soul singer and songwriter, rose to fame as lead singer of Harold Melvin & the Blue Notes in the 1970s before a successful solo career at the end of the decade.

Angus Young (1.4.7, Neptune cjn Asc, Uranus cjn Moon) born on 31 March 1955, in Glasgow, Scotland, guitarist and songwriter who has been the lead guitarist of Australian hard rock band AC/DC since the group was formed in 1973. Young is known for his hard-edge style lead (and signature vibrato), wild stage energy, and schoolboy clothing.

This is the Southern polar opposite side of Akirwa, the Nation of Alkahepad, the venerated saint from whom the capital takes its name. Alpaherayd also includes the peninsula of Alkira, whose main town, Alkiratarford, is the official port of connection with the Domain of Pozdah.

Epic Grahic Issues: Forced sex or energy work from invasive or antagonistic entities aimed at dominance, implantation or manipulative procreation. Root source of all most denied and pent-up grievances related to human relationships. The positive polarity takes over, taking initiative over energy exchanges and mating, with the negative being expectant and receptive, relinquishing its multidimensional power. Intense proliferation of grahic components due to consensus, programmed and unconscious acceptance of most abusive manipulation of previous natural cycle. Healed through inversion of consensus polarisation, with the negative polarity taking initiative concerning energy work, inviting the positive polarity, who requires a direct request in order to operate.