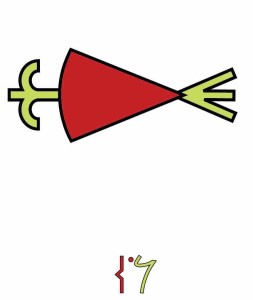 In the Astroshamanic Binary System Sun in Aries (1) and Moon in Virgo (6) constitute Binary 1.6, or Binary number 6.

Those who resonate with this combination are most efficient beings, determined to get things thoroughly done at the earliest convenience, considering them from every perspective, without overlooking any detail.

They have very analytical mind and seem to be constantly on the alert for any work pending, operating with maximum organization and bewildering speed. From such folks you can expect to receive the answer to your e-mail before you send it.

Aries and Virgo are in quincunx aspect, an angle of 150°, which is five-twelfths of the 360°. This aspect appear to cause slides into parallel universes affecting what happens in your everyday reality. The influence can be moderate, yet in some circumstances rather abrupt. Depending on the multidimensional conscious openness of the elements involved it can be experiences in harmonious or disharmonious ways.

This binary focuses on getting jobs and tasks done no matter what. The Aries part takes the initiative and leadership, forcing situations if necessary, while the Virgo bit takes care of the organisation and practical features, making sure that all is achieved on time. Issue can occur when Virgo’s concern for details and perfection, do not integrate with Aries’ straightforwardness, impatience and quick temper.

Four days following the First Quarter, the Moon moves between 135° and 180° from the Sun, which is the Gibbous Moon. It is a receptive phase, a time of pause and rest when things tend to flow. If you have productively used the energy of the previous phase, now you can gather the first fruits. It is not usually an ideal moment to act or force situations. It is a time of preparation aimed at reviewing past actions, considering information related to what was established at New Moon, and filtering all data. In this context, on the Moon in Virgo side, it is important not to get lost in details, while pursuing this process of filtering and discrimination. The question here is: “How can I put together all the different pieces of the puzzle? What needs to be refined or discarded? And, most of all, what is the largest picture?”

Astroshamanic Seal: a horizontal cone with the apex on the right, from which three lines come out as roots, while on the opposite side there are two semi-circular gushes held by a bar. It is a seal of drastic and brutal cleansing, causing a crack of the human arbitrary configuration, aimed at annihilating the separated identity and world, leading to a vast sense of emptiness. This allows the emergence of a more authentic underlying multidimensional identity.

Akira Kurosawa (1.6.4, Neptune cjn Asc) 23 March 1910 – 6 September 1998, Japanese film director, film producer, and screenwriter. His first credited film (Sugata Sanshiro) was released in 1943; his last (Madadayo) in 1993. His many awards include the Légion d’Honneur and an Oscar for Lifetime Achievement.

William Morris, (1.6) born 24 March 1834, Sun in Aries, Moon in Virgo, English poet and artist. Red or blue? In the movie “Matrix” Neo is offered the choice between a red and a blue pill. The blue pill would allow him to remain in the separated reality of the Matrix, therefore living the “illusion of ignorance”, while the red pill would lead to his escape from the Matrix and into the real world, therefore living the “truth of reality”. Similarly, in “The Defence of Gueneveve”, by the English poet William Morris (born on 24 March 1834), an angel invites the dying protagonist to choose between two cloths. One of these cloths is heaven, and one is hell. The angel will not tell which is which, and the protagonist has to guess. “And one of these strange choosing cloths was blue, wavy and long, and one cut short and red; No man could tell the better of the two.” After a lot of pondering the protagonist says: “God help! heaven’s color, the blue” yet unfortunately the angel reveals that blue is the colour of hell. What is shown here again is the deceit of our separated reality, where everything is upside down.

“Now I am quietly waiting for
the catastrophe of my personality
to seem beautiful again,
and interesting, and modern.
The country is grey and
brown and white in trees,
snows and skies of laughter
always diminishing, less funny
not just darker, not just grey.
It may be the coldest day of
the year, what does he think of
that? I mean, what do I? And if I do,
perhaps I am myself again.”

Anton  LaVey (1.6.11, Uranus cjn Sun) 11 April 1930 – 29 October 1997, founder and High Priest of the Church of Satan, writer, occultist, musician, and actor, author of The Satanic Bible and the founder of LaVeyan Satanism, a synthesized system of his understanding of human nature and the insights of philosophers who advocated materialism and individualism, for which he claimed no “supernatural inspiration”.

Teresa of Avila (1.6.1) Sun Aries, Moon Virgo, Ascendant Aries, born in Gotattenndula, on 28 March 1515, with Sun in Aries, Moon in Virgo and Ascendant in Aries, died 4 October 1582, she was a Spanish Catholic trance nun, mystic and reformer. She had shamanic visions and communications from God, and founded several monasteries in Spain. She described the ascent of the soul in four stages. The first (heart’s devotion) involves contemplation or concentration. In the second (devotion of peace) the human will is lost in that of God through a supernatural state. The third (devotion of union) is an ecstatic state characterized by blissful peace and a conscious rapture in the love of God. The fourth (devotion of ecstasy or rapture) is a passive state, in which the consciousness of being in the body disappears. This is the climax of the trance.
All things must come to the soul from its roots, from where it is planted.
Pain is never permanent.
The feeling remains that God is on the journey, too.
To have courage for whatever comes in life – everything lies in that.
To reach something good it is very useful to have gone astray, and thus acquire experience.

Let nothing disturb you,
Let nothing frighten you,
All things are passing away:
God never changes.
Patience obtains all things
Whoever has God lacks nothing;
God alone suffices.

Nelfras includes the archipelago of Northern Nelfras and an ample territory on the west-central coast of the peninsula. It is dedicated to the warrior monk saint (El Fras), who caused a lot of turmoil in the Handorian States System, until he was isolated in the island of Alapis where he established the foundations for the creation of his Nation. El Fras is a dynamic and paradoxical saint, able to switfly leap from one state of consciousness into the other, yet what mainly characterises its ways is the overflowing presence of happiness and joy out of whatever arises. El Fras was recularly harassed by its imagination urging it to act in the world, until it realises that the imagination was urging it to act in the imagination.