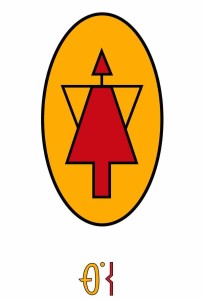 In the Astroshamanic Binary System Sun in Cancer (4) and Moon in Aries (1) constitute Binary 4.1, or Binary number 37.

This binary incorporates major heroic beings, profoundly devoted to their homeland and tribal roots, aligned with the deepest source of ancestral expressions. They amazingly balance tenderness, protectiveness and the essence of the feminine archetype with warrior qualities and all the basic traits of the masculine.

Those blessed with the active awareness of their multi-dimensional nature are thoroughly determined souls, replenished of fourth-dimensional purpose, storing the juice of arcane memories, unbendingly prepared to defend their integrity, ready to launch into most bellicose enterprises, yet always preserving their utmost sensitive, tender and nurturing qualities.

These passionate beings take brave steps unknowingly, steered by an arcane calling, which propels them onto adventurous quests and radically reawakens the flame of the planetary pristine Intent. They stream the most genuine emotions, devoid of any complexity, crystal clear, intense, yet quick, easily released and gone.

Cancer and Aries are in a square (90°) aspect. They are both cardinal signs, holding the initial stage, basic intention and assertion of the direction, season and element they represent, South and East, Summer and Spring, Water and Fire respectively. They share the capacity to take initiatives, be brave and pioneering new paths, though their energy may work at cross-purposes and cause some friction. In ordinary terms these signs appear difficult to integrate due to the tension they generate, and yet this same tension can provide the best force for achieving most significant objectives.

Astroshamanic Seal: an egg shape with a being within standing with hands on hips and elbows up. The vision involves a warrior tearing off his clothes.

4.1 – The Nation of Qapraxa
The Nation of Qapraxa, whose capital is Diana, is the land of the original brave warriors who emerged on the surface of the planet, moving through the multi-dimensional gap of the Kallex Portal. They keep the memory of all the pandemonium and wretchedness of that pristine migration. They tacitly witnessed the agony and the screams of those who did not make it. They relentlessly struggled to get to the other side and eventually succeeded. And when they attained their goal, they found themselves solitary, with their beloved ones left behind, yet with the inheritance of the luminous seed to shelter and grow. Hence, Qapraxian are heroic warrior single mothers. Please be aware that these terms have multi-dimensional implications and do not necessarily refer to third-dimensional forms. Hence, a Qapraxian warrior single mother could also be a third-dimensional married mother, a woman with no children and even a man. Yet, some third-dimensional single mothers may find strong resonance with Qapraxa.
Qapraxa folks have a great heroic reputation in the multi-dimensional universe. They give birth no matter what. And in order to ensure this birth they can face all sorts of ordeals. Not only they manage to give birth in the most adverse circumstances, they are also capable of nurturing and taking care of their offspring regardless of danger and threat. They are masters in distributing and administering energy. As I said, they are those who, together with the Alpaherayd people (1.4) in the State of Akirwa, first emerged on the surface of Handor, holding the seed of the Sacred Cone and giving it birth in the most treacherous conditions. Not surprisingly, this maternal audacity, along with the blend of tender affection and impetuous forcefulness, make them one of the most powerful warrior folks in the multi-dimensional universe. The devotion to their offspring is such that none of them has ever been concerned to narrate their own myth. Hence, the pages of the Epic are almost blank when it comes to them. Alas, I do not have the time to honour their sanctity. Yet, I will take Kapraxian through my healing dance tonight. For I worship you as your son, lover and parent. And your dancing ambassador and sacred chronicler I am, there in the land of exile, joyfully awaiting the day of my return.
In these binary days, call upon Kahprax if there is a project and dream you are determined to give birth to. Cry out “Kahprax” four times, then pause, take a deep breath, and yell “Kaprax” one more time. As you do this, set firmly your Intent, let it spread through the sound of your voice until it reaches the portal of Kahprax warrior mothers. And remember, once the portal is reached, they will deliver. They will, though you may forget. Hence, be alert. Also relax, for they won’t expect anything in return. Yet, please, do give them all my love, and kiss them on the forehead. Do it for me!
The Trinities of Qapraxa have all a common deepest ancestral ardent focus and represent a thriving breeding setting for some of the most valiant defenders of the Handorian heritage. In Qapraxdefensa (4.1.1), and particularly in its head city, Don Delegacion, reside the Keepers of the Dorian Doorway, constantly open and alert to take action whenever the multidimensional security of the States is threatened.