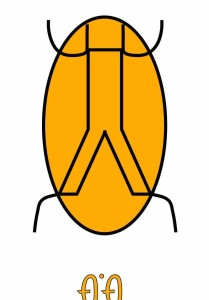 In the Astroshamanic Binary System Sun and Moon in Cancer (4) constitute Binary 4.4, or Binary number 40.

This is the New Moon binary and a climax of Cancer energy. Extremely sensitive, protective and nourishing, it holds a special and deep connection with ancestral roots and traditions, with the capacity of keeping its basic memory and referring whatever happens in ordinary reality back to its causative multidimensional source.

Sun and Moon in Cancer is a conjunction and New Moon binary, climaxing all the Cancer qualities.

New Moon in Cancer:  This is the moment when Sun and Moon are exactly conjunct. With the New Moon, or Lunation, an old cycle ends and a new one starts. Each lunar cycle starts with the New Moon, reaches its climax with the Full Moon and ends with the next New Moon. The sign where the Moon is positioned at the initial New Moon determines the energy and Intent of the entire cycle. For example, with this New Moon in Cancer, the whole lunar cycle will be characterised by Cancer or Sector 4 topics, also when the Sun moves in the adjacent sign Leo. The current New Moon’s astrological sign (Cancer) embodies both the features of the Intent and the way of dealing with the release process of the previous cycle.
The New Moon is a period of transition when the seed is present, yet it has not taken a definite form. At this stage dreams or insights, and also prominent situations developing at a physical, emotional or mental level can provide clues about the upcoming form.
The New Moon is an active phase, with the male energy being prevalent. It carries a new awareness and a shift of perspective. This allows to set the Intent and foundations for new projects or to release old cycles and grievances. Yet, since the whole scenario is obscure, it may be a time of vulnerability and uncertainty.
This strongly encourages abstention from relevant enterprises or initiatives in the outer world. It is an ideal moment to relate with one’s multidimensional self, or Guide, to take some rest and reflect upon the lessons of life, to release what is no longer needed.
The general question here is: “What do I truly want?” In the context of the current Cancer New Moon other questions may be: “What is the true purpose of my current life in a physical body? What are the sources of nourishment and support of this purpose? In which way can I provide nourishment and support for others and the environment? Where do I come from? What talents have I inherited from my ancestors and how can I use them in the present? What grievances have I inherited from my ancestors and how can I heal them?”
On a New Moon questions require an honest answer, which is not conditioned by general or cultural ideas about what is desirable and strictly refers to one’s own uncontaminated awareness.
During each New Moon it is empowering to tap into the energy of your Intent at a shamanic and visionary level. This may be strategically done through a specific journey and the astroshamanic Basic Ritual of the Sacred Cone.
Be aware of your Intent, no matter whether it appears as a sheer illusion or fantasy to your ordinary mind. This is not the time to be pragmatic or to be concerned about how to accomplish things. It is the moment to open up to your pure Intent, as you fully envisage it with no limitations. Later, as the cycle progresses, there will be chances to refine the Intent, orienting it towards manifestation and understanding its practical implications.
At its core level Cancer concerns the search and finding of the primary roots and the original Intent of our presence in a physical body. Here I have the chance of voyaging into time and space, experiencing and healing most ancient mythic recollection, revisiting ancestral lineages, releasing blocked energies and gaining understanding about the collective Intent that truly motivates my life.
You can activate authentic and vivid memories that allow you to pinpoint true needs and release others based on grievances and oblivion. Just as in the ordinary life there are places and people that give temporary shelter and nourishment, also in the non-ordinary realms there exist similar areas. Yet their protection is not based on time and space. It is founded on other patterns of dimension and can be eternal, abundant and unlimited.
There you can receive free and unconditional love, gradually releasing my co-dependence to the perception that has produced the ordinary world where you believe to live.
In astroshamanic work the position of the Moon plays a significant role as it provides clues regarding the lineage and the ancestral initiatory path or mystery school the person has already experienced.
This area, which the individual is likely to have mastered in previous times or parallel realities, represents an essential foundation for the realisation of the basic Intent in this current life or dimension. At the same time, it can easily cause addiction, attachment or misuse if its acquired potential is not focused within the present path of initiation, which may differ considerably from the previous one.
The Moon carries the most ancient and significant memories of our life on this planet. It is often related to places and times that appear either as the most attractive or repulsive. As such, it holds the key components of shamanic recapitulation, which is practice that significantly fits with a Cancer New Moon.

Astroshamanic Seal: an egg shape with a pattern suggesting an embryo. The vision of this seal involves some birds pecking at a branch amongst many other birds by the lake. Suddenly all the birds take off. From the lake a large white egg emerges. The egg is huge and gradually lifts up. “This is the place where the Moon goes on a New Moon. In the lake it renews itself and then re-emerges.” The  Moon operates as the egg and the birds are connected with the egg. The egg emphasizes an embryo of light, which gives shape to the seal. There are two seals at work here, one related with Graha, the other with Quiumakai. The second seal will come only if there is availability to move within the first. The first will then be liberated through fire, allowing the emergence of the second.
“You teach with your example. Operate your Function. Be a signpost of your Intent of light connected with your Function. Go into the role of teacher or facilitator when you are given this role in the comedy. Remember it is just a role. As for us a role does not mean anything What matters is that you apply your Function there as you would in any other role. Being a teacher gives you a great opportunity for that”.

REGION D4-4: Portugal
Decanate Sign/Ruler: Cancer/Moon
Duad Degree: 0-2½° Cancer
Administrative Division: Portugal is divided into mainland Portugal (Portugal Continental) and the autonomous regions of Portugal (Azores and Madeira). Mainland Portugal is divided into 18 Districts, further divided into 308 municipalities (concelhos), which are subdivided into more than 4000 parishes (freguesias). The 18 district capitals of mainland Portugal are: Aveiro, Beja, Braga, Bragança, Castelo Branco, Coimbra, Évora, Faro, Guarda, Leiria, Lisbon, Portalegre, Porto, Santarém, Setúbal, Viana do Castelo, Vila Real, and Viseu – each district takes the name of the district capital. According to the European Union’s system of Nomenclature of Territorial Units for Statistics, Portugal is divided into 7 regions (Açores, Alentejo, Algarve, Centro, Lisboa, Madeira, and Norte), which are subdivided into 30 subregions. PTU Provinces for D4-4 are divided according to Districts, indicated below together with their ISO-codes.
ProvOrdo Authority: Portugie Asmake Providia, operated by the Portugie Neinve Prasamaya, or Irmandade Portuguesa, which is directed by the Viri Eminerime Portugie Pujaniye Up Acaria. It consists of one district, with one society: Lisboe (Lisbon), which also exercises supervising functions through the Portugie Neinve Prasamaye Sekrava Jenera.