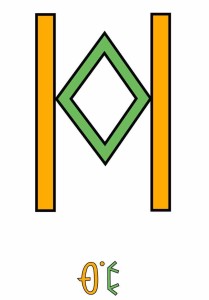 In the Astroshamanic Binary System Sun in Cancer (4) and Moon in Libra (7) constitute Binary 4.7, or Binary number 43.

This binary provides the capacity to commit to relationships with passion and responsibility, especially when they serve a nourishing and healing function, with  implications expanding beyond everyday reality.

Cancer and Libra are in a square (90°) aspect. They are both cardinal signs, holding the enterprising and starting force of the direction, season and element they represent, South and West, Summer and Autumn, Water and Air respectively. They share a mutual initiatory energy and the capacity to activate changes, paving the way for novel courses of actions, though their emphasis operate differently. Cancer sets in motion times of extremes and intensification, when energy is aimed at reaching a climax, while Libra promotes balance and integration, though it also create the setting for abrupt shifts.

Binary 4.7 (Sun in Cancer and Moon in Libra) vastly stimulates the exciting entwined network of the three classical elements of love relationships: horizontal, vertical and multidimensional.

The horizontal refers to an outer partner, i.e. a human being currently living on Earth, someone I can see and with whom I may have, or wish to have, a relationship.

A multidimensional partner corresponds to the third stage and encompasses both the inner-vertical and the outer-horizontal partner, with the function of healing the separation between the two and promoting human reconciliation with other dimensions.

Now, this thing of the multidimensional partner is undoubtedly rather captivating, for I am sure most folks would crave to have one. In this respect, the good piece of news is that, whether we believe it or not, we all have one.

Hence, the invitation is to relax, find out where it is and what is preventing me from fully acknowledging him-her. This is a topic that would need further clarification, which I am not obviously giving herewith.

The following are some rudimentary and most provisional suggestions if you aim at manifesting a multi-dimensional relationship. First of all, focus on your Intent and connect it with the Function. This means being impeccably available to surrender to your Guide and core multi-dimensional identity. Allow the Guide to unveil your veritable purpose in life. Find out who you are in the broader scenario of life.

Completely adhere to this vision, regularly aligning with it through shamanic voyages, meditations, basic rituals and other energy practices. Do this before even considering the idea of being in a relationship with someone. Secondly, firmly ask your Guide and core multi-dimensional identity for a connection with a loving human being, with whom you can relate in accordance with the highest possible design, for a mutual benefit involving both you and him-her, your respective ancestors and successors.

Also make sure that you elucidate what you honestly desire in this relationship. Make it very clear that you are open to this experience and sustain this with regular practices, always aligning with your Intent connected with the Function. Welcome, honour, and relate with, this being before she-he enters into your life. This means that you start to establish a rapport with this being prior to your first meeting with him-her. In the meantime, cherish all the people you relate with, even if you are sure they are not your promised horizontal partner.

Please be aware that this partner is drawn by the amount of love and passion that you express in your life right now and before actually meeting him-her. Also please remember that, as a matter of fact, this partner has always been with you, and is indeed with you in this moment. Hence, every moment of you life, whomever you are with, is a chance for communicating with him-her.

Once you do meet him-her, honour him-her at the beginning of your relationship, both on your own and together with him-her. Continue also in the case you separate. Gradually release all the conditioning regarding how the relationship should be or become. Open up to its transparent and spontaneous development. Receive the gift and true purpose of this relationship in the wider multi-dimensional context of your Function.

Astroshamanic Seal: two vertical lines with a rhombus between them.

This seal promotes an intimate relationship with the Guide or Core Multidimensional Self. “Through this relationship you love whoever and whatever exist within and without you. This is the perfect couple. The Guide stands both for the light and the shadow.”

The seal enhances the search for separated parts of the soul, for the lost lover. It provides the passion to strenuously look for it and finally find it, becoming aware that it has never abandoned us. As a result its search becomes a declaration of love aimed at refining the ecstasy of the final encounter. Once the encounter takes place, despite all the most apparent and illusive difficulties, the union is adamant and the multidimensional wedding is celebrated world without end. Day and night come together, Sun and Moon unite, proclaiming their eternal relationship.

Nikola Tesla (Serb-American inventor, physicist, 4.7.2, Pluto Instrument, 10 July 1856 – 7 January 1943) My Inventions, Testa Papers, one of the major non-ordinary inventors of all times. He is the mind behind our contemporary electrical world and further most controversial inventions. His numerous manuscripts are still kept as “top secret” by the US Ministry of Defense. His capacity to delve into the multidimensional was such that he had often trouble distinguishing between a multidimensional object and an ordinary one. He would build machines in his imagination, run them to see where they were flawed, and make whatever non-ordinary repairs and adjustments were needed, before manifesting his device into ordinary reality. During the night, Tesla also made journeys to multidimensional realms and established relationships with their beings.

4.7 – Nation of Ducodarg
This nation is definitely one of the most shamanically romantic nations in Handor. The exquisiteness harmony of Ducodarian valleys and picturesque beaches is the ideal scenario for any memorable amorous ventures.

Multi-dimensional idyll is indeed the favourite form of entertainment of Kallexians in general, and it is at Ducodarg that this game may resonate more with human experience. Consequently the Developers of the Sacred Cone, during their intensive training in Haragox at the Dark Rock of Kallex, were on some most special occasions allowed to move to Ducodarg for a short vacation, especially to Quendot and its coastal towns (4.7.7), the Dome of Samatet and Dorian Flirt (4.7.12).
Ducodarg is an insular southern extension of the peninsula of Lobster, from which it is separated by the Thoracic Duct, an ancient most strategic channel connecting the Dorian East Sea with the Pozdah Great Sea. The capital is Quendot (4.7.7), a major seaport and well-known for its Handorian Sacred Cone League squad, bearing its name. It was originally a small port town (a dot) operating as a romantic stop-over for early navigators and pioneers, which then developed into a large city and metropolitan centre.
Ducodarg is also renowned for being the original place of disclousure of the name of the Sacred Cone (Pahai Sadoh), unveiled in the Ducodarian Trinity of Drat (4.7.4) at the site of the current Vicarial Zone of the Disclosure of the Name of the Sacred Cone. Docodarg is the hosting nation of the Dorian Egg and the Divination Egg. In the trinity of Ducodar West (4.7.12) the mythic hero Kurandah is alleged to have performed his first healing ecstatic dance.