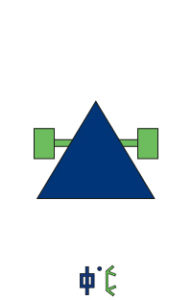 10.7 (Sun in Capricorn and Moon in Libra) is a mix of cardinal earth and cardinal air, blending Capricorn’s discipline, focus, manifestation and maturity with Libra’s harmony, grace and balance. This combination generates an attitude of deep concern for the dynamic of human relationships, and their healing management based on clear agreements and focus. Reliability, commitment, determination, perseverance and the capacity to work relentlessly in order to implement specific goals, proceed well-balanced, enhancing a solid sense of grace and beauty in those who are inspired by this binary.

Capricorn and Libra are in a square (90°) aspect. They are both cardinal signs, holding a direction and seasonal gateway, North and West, Winter and Autumn respectively. They share the power to initiate changes and the related enterprises, though their energy works at cross-purposes and this can cause some significant friction. In ordinary terms these signs appear hard to integrate due to the tension they generate, and yet this same tension can provide the massive force needed for achieving most significant objectives.

The Last Quarter or Waning Halfmoon lasts two days and occurs when the Sun and Moon are in square (90°). It is an active phase, a time to face commitments with others and take direct responsibility for your Intent. Grievances and blocks come easily to the surface and need ideally to be dealt with in accordance with what was established during New Moon. If this responsibility is avoided, postponed or diverted the collective lunar cycle itself is going to find its way to compensate the process. This development can easily bring frustration, pain, confusion and disconnection from the original Intent. Now it is the time to release anything that you perceive has caused grievances, emptying yourself fully, while allowing All That Is to hold you. At this stage, you can both complete the cycle by manifesting the final goal and let go of any block and grievance you have accumulated on the way, including your attachment to the final result. The question here is: “How do I complete and release?” This Moon is related to the Autumn Equinox.

Astroshamanic Binary Guidance: A firm invitation to promote clarity and integrity in relationships, releasing emotional and subtle manipulations. Love and harmony manifest by honouring agreements and commitments. Establish clear conditions in every relationship and honour only what is established. Avoid heeding what purports to be given for granted. Be vigilant regarding whatever secretly slips imposing its non-agreed presence. Honour the agreements taken in the light and all sacred intentions. Take note of all agreements. Encourage this attitude everywhere and claim commitment within and without you.

13 January: Saint Mungo, or Saint Kentigern – Memorial (Scotland), known as Mungo, apostle of the British Kingdom of Strathclyde in the late 6th century, and founder and patron saint of the city of Glasgow.

Hypatia, Head of the Neoplatonic School in Alexandria & Martyr.

Go forth and set the world on fire.

To give, and not to count the cost
to fight, and not to heed the wounds,
to toil, and not to seek for rest,
to labor, and not to ask for any reward,
save that of knowing that we do thy will

Suscipe: Take, Lord, and receive all my liberty,
my memory, my understanding
and my entire will,
All I have and call my own.
You have given all to me.
To you, Lord, I return it.
Everything is yours; do with it what you will.
Give me only your love and your grace.
That is enough for me.

Anima Christi: Soul of Christ, sanctify me
Body of Christ, save me
Blood of Christ, inebriate me
Water from the side of Christ, wash me
Passion of Christ, strengthen me
Good Jesus, hear me
Within the wounds, shelter me
from turning away, keep me
From the evil one, protect me
At the hour of my death, call me
Into your presence lead me
to praise you with all your saints
Forever and ever
Amen

Prayer for Generosity:Lord, teach me to be generous.
Teach me to serve you as you deserve;
to give and not to count the cost,
to fight and not to heed the wounds,
to toil and not to seek for rest,
to labor and not to ask for reward,
save that of knowing that I do your will.

Dave Cousins (10.7) born 7 January 1945, Hounslow, Middlesex, English singer and songwriter, who has been the leader, singer and most active songwriter of Strawbs.

Binary 1999: Pahekarubetabe, 090199 (10/7):
Rocky rounded hills.
“This is the place where relationships are clear and full of integrity.”
I see a double rocky chalice.
“Here there is no space for emotional and subtle manipulations.
Conditions are established by the two parties, who commit to honour them, making of this commitment their supreme act of love and harmony.
Establish clear conditions in every relationship and honour only what is established.
Avoid heeding what purports to be given for granted.
Be vigilant regarding whatever secretly slips imposing its non-agreed presence.
Honour the agreements taken in the light and all sacred intentions.
Take not of all agreements.
Encourage this attitude everywhere and claim commitment within and without you.”

HSS 10-7 – State of Kortex, Kingdom of Mauntaint: It is located in the North of the Handorian State of Kortex (aka Haxar). The capital is Konerant, whose traditional plaid consists of green, brown and yellow stripes. It is associated with the Binary 10.7 (Capricorn-Libra).