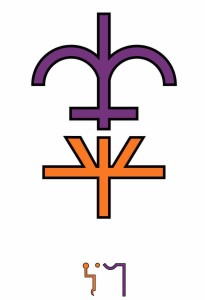 In the Astroshamanic Binary System Sun in Gemini (3) and Moon in Aquarius (11) constitute Binary 3.11, or Binary number 35.

Click here for details on this position and when it has last taken place.

This configuration amplifies the Air element and its synergic properties, promoting breakthroughs in the relationship between ordinary and non-ordinary. In particular, it is much easier to generate gaps in the limits of conventional communication and reach remote or apparently inaccessible individuals, beings, locations or states of consciousness. For example, I call someone by mistake, who in that moment was desperately trying to connect with me but had lost my telephone number, or I turn on the television and the first thing I see is my power animal, who through an ordinary documentary communicates relevant information. This combination, though airy, is also related with the subtle vibrations of the mineral world and their stimulation. On this binary system, astroshamanic healing stones, such as the Trevilian Stones, are often blessed by water and activated.

Gemini and Aquarius are in a trine aspect (120°), which produces an easy, balanced and mutually supporting link between the signs involved. This can bring major benefits when there is clarity of intent and focus. If this is not the case the benefits will develop unconsciously and gained by whoever holds a clear intention.

Astroshamanic Seal: a large bird holding a scroll with a message, coming from the Higher World, the Fifth Dimension, Handor, and aiming at the Earth. Upon entering the Earth gravitational field, the bird remains suspended, unable to descend. A large green hand emerges from the Earth and takes the scroll. Later another large hand delivers to the bird another scroll with a message, which the bird takes and bring up to Handor.

“How happy is the blameless vestal’s lot!

The world forgetting, by the world forgot.
Eternal sunshine of the spotless mind!
Each pray’r accepted, and each wish resign’d;”
(Alexander Pope)

3.11 – PRINCIPALITY OF NASTORY
The Principality of Nastory is situated in the central area of the Confedetated Tudorian Principalities. The capital is Cameul and other relevant centres are Caramel, Carousel and Provisional.
The following is a provisionally translated most abridged account on the hero of the Principality of Nastory taken from the Provordo Pahekarubhetabe Sinierah (Introduction to the Provisional Aphorisms of the Binary Network of the Epic of the Sacred Cone), the astroshamanic work devoted to the binary rapports of Sectors. Tudor (Sector 3) is, together with Ykal (Sector 11), one of the dimensions more frequently associated with winged heralds and angels as messengers. When the combination 3-11 is set with Nastory, this theme can reach its climax. Nastory takes its name from the heroic Handorian herald and his brave bird, Nahistor.
Nastor is the paladin of the Heralds of the Handorian Guard Corps, the special angelic unit aimed at shielding the central star of Handor. Handor himself assigns to Nastor a most complex and cryptic mission.
From Cameul, the Nastorian capital, Nastor and his bird fly to Handor. There Nastor receives a special message in a conic container, which has to be delivered to an unidentified zone of the Grey Sphere, the dimension beyond the Ultimate Frontier (the remotest border of the Handorian firmament). Nastor navigates through those enigmatic spaces. Together with Nahistor, who holds the conic message firm in its beak, he embarks on a major odyssey filled with extraordinary adventures. The identity of the beneficiary of the message is not at all clear, and this causes Nastor to proceed through many capricious and paradoxical situations.
Then, the heroic herald approaches the planet of the Zruddha, i.e. the Earth. He tries to land, yet his bird remains suspended and does not manage to descend. The Graha Ilibisi (demonic antagonistic forces) have built a thick barrier blocking the access to the planet. Nastor and Nahistor try all kinds of stratagems to handle the barrier, yet they fail. The forces they are confronted with appear indomitable.

Nastor assumes that the planet of the Zruddha is the recipient of the message. To avoid being detected by the Graha, he resolves to remain still in the terrestrial sky, trusting that a gap may manifest in the barrier.
Many ages go by, and Nastor continues to be immobile in the sky.

Now, I need to point out that for a Tudorian, not to mention a herald, staying motionless is the most painful occurrence one can conceive. Yet, Nastor unbendingly adheres to his resolution. His immobility causes desolation, which he strenuously thwarts, displaying detachment and accumulating unshed tears. One day the impetus of his tears becomes unbearable. Nastor attempts to block them, yet in vain. An enormous tear seeps through his face, glides into Nahistor’s beak and precipitates in the void. Nastor is dismayed by his weakness. He is concerned for the descent of the tear has infringed his immobility. Upon observing the tear tumbling down though, he is amazed to see that its liquid is producing a breach into the barrier.
All in a sudden, a handsome green hand emerges from the Earth, moves through the breach, gently strokes Nahistor’s beak, seizes the cone with the message and descends. Later, another beautiful hand comes out from the Earth and delivers a message to the beak. Nastor and Nahistor then return to Handor and hand over the message to the central star. Their arrival at Handor is one of the most jubilant events of the entire Epic. Its remembrance is celebrated as a major solemnity in Tudor, Ykal and the Western Area of the Handorian States. In truth, the hands that emerge from the Earth belong to Rodnah, of whom the Handorians, with the exception of Handor himself, had never heard about. She is the covert recipient of Handor’s message, and Handor is the beneficiary of her reply message. Those graceful hands, upon seizing the conic message, stroke Nahistor’s beak. On that glorious occurrence communication between Handor and Rodnah is re-established, after an interruption which even precedes the foundation of the Handorian States System.  Nahistor’s beak, touched by Rodnah, is incorporated as a Handor’s body part, so as to allow the central star to perceive the contact of his beloved. The beak, Came in Tudorian language, becomes the seal of the Heralds of the Handorian Guard Corps. The beak, before it is touched by Rodnah’s hands, has a small lump (Cameu, “little beak”), which then mysteriously disappears. In this respect, a series of other epic tales develop. I am not going into them. Briefly, Rodnah appears to seize, together with the conic message, also Cameu. However Nastor, in another development, retrieves Cameu, with the condition that the little beak be installed at Cameul, the Nastorian capital.