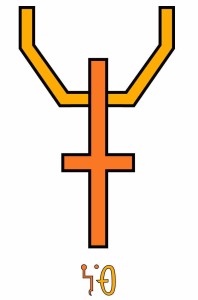 In the Astroshamanic Binary System Sun in Gemini (3) and Moon in Cancer (4) constitute Binary 3.4, or Binary number 28.

This combination enhances intellectual focus and sensitivity, with the ability to provide comfort and nourishment at that level. The communication and networking qualities of Gemini embrace the sphere of original traditions, ancestral inheritances and romantic enterprises.

Sun in  Gemini  and Moon in Cancer form a semi-sextile (30°) aspect, connecting two consecutive signs, which are most different energies, yet closely linked. The signs involved can work well together as long as they keep their integrity. The Sun sign, in this case Gemini, sets the process in motion, and the Moon sign (Cancer) follows. If Gemini’s communication, intellectuality and lightness pave the way, Cancer’s sensitivity and cautiousness can provide major blessings in the Gemini networking spree.

Astroshamanic Seal: a half octahedron with at its centre a vertical line descending and crossing a short horizontal line, suggesting a cross or sword. This seal exemplifies the origin of communication. It supports the release of blocks to authentic communication. The release occurs through writing, speaking, giving shape to words. Authentic visions are manifested through rightful communication, which also involves letting go of false communication.
.
Celebrities with 3.4

Padre Pio: born on 25 May 1887 in Pietrelcina (Benevento, Italy), as Francesco Forgione, with Sun in Gemini, Moon in Cancer and Ascendant in Scorpio (3.4.8), Pluto Power, died on 23 September 1968, he is a Catholic saint, mystic, recentlly canonized and most famous for his non-ordinary powers and miraculous or controversial stories. In 1818 he had his first stigmata, which remained for the rest of his life. The blood flowing from the stigmata was said to smell of perfume (odor of sanctity). He acquired great popularity as a miraculous healer and for other skills, such as bilocation, soul reading and foreseeing. He would hear confessions or celebrate a mass in the church, while at the same time visiting sick people or hearing confessions in other places. Padre Pio had the capacity to direct healing energy by sending a part of himself in a multidimensional frequency, which allowed him to be seen in ordinary reality. This, as well as other Padre Pio’s gifts, was the result of an impeccable discipline and a devoted adherence to the web of life, which was, and is, constantly misunderstood in his ordinary environment. His main focus was towards the relief of human pain, and in this respect his major pragmatic acheviement was the manifestation of the Casa Sollievo della Sofferenza (Home to Relieve Suffering), a large hospital in San Giovanni Rotondo, which is currently considered one of the most efficient hospitals in Europe. In 1962, Karol Wojtyła (the later pope John Paul II) wrote to Padre Pio to ask him to pray to God for a friend in Poland who was suffering from cancer. As a result the cancer regressed with medical professionals being unable to offer an explanation for the regression. During that time Padre Pio predicted that Wojtyła would someday become pope. Due to his non-ordinary powers, the Church carried out various investigations and was at one point banned from celebrating masses in public, receiving visitors, or talking to women alone. He was charged of faking miracles, exploiting people’s credulity and having sex with women in the confessional box. He was also regularly ridiculed, despised and offended by several church officials and authorities. Nevertheless Padre Pio was generally regarded as exceptionally holy even during his lifetime. He died in 1968 and in 1982 the Church opened investigations to discover whether he should be considered a saint. After various delvelopments Padre Pio was officially declared a saint in 2002. Half a million people attended the announcement ceremony.

3.4 – PRINCIPALITY OF MAGD
This principality lies in the south-east coastal plain and is also relevant for its inner valleys, which have been most decisive places of nurturing refuge in troubled ages. The capital of this nation, City of Magd, is a major resort for erratic multi-dimensional romances characterised by light and playful passion. The city includes 144 circular towers and an epic port at Clavicula Demagd. The top northern area of the Principality is called Coneland, whose head city is Conehead, built spiral-wise on a conic elevation. Magd is on the sacred Pulmonary Path, whose main site is Pulmonary Righted (3-4-5).

The Counties of Magd

The Counties of Magd