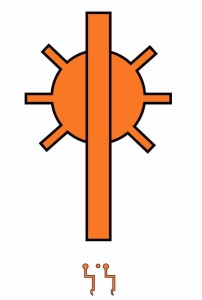 This binary generates most mentally active and agile beings, capable of embracing a wide spectrum of fields and establishing connections among them. Their function is vital in networking enterprises and whatever concerns viability, communication and flow of the web of life.

Driven by a spontaneous urge for communication and knowledge, this combination can easily tread a huge variety of paths, recording all the essential information, while also being skilful at conveying it with words and actions, and then moving on, without ever getting stuck.

Sun in Gemini and Moon in Gemini is a conjunction and New Moon binary, climaxing all the Gemini qualities.

This New Moon may stimulate an inner flow in communication, provisionally interrupting the stream of projections promoted by our separated reality and unveiling links with our authentic nature and resources.

This is an open invitation to acknowledge and articulate your deep resources, no matter how trivial they may appear. Qualities reveal their value when they are communicated and shared. In this fashion, you can become aware of their value through the feedback of those who receive them.

Using the New Moon to acknowledge who you are and what you can contribute to the world right now, without any effort, is indeed one of the most heroic enterprise you can involve yourself with during these critical times.

By recognizing, articulating and sharing who you already are, you can sense the immediate satisfaction of playing your part for the benefit of the whole. This also allows you to be seen and easily receive from the whole those qualities that you seem to miss.

This New Moon is also traditionally ideal to consider the exploration of new areas of training, explorations and partnership, such as deciding to go on a spiritual quest, attending a series of workshops, writing a book and beginning a relationship.

Accepting and expressing what you already are, allows other people to do the same and the result is a network of healing acceptance that brings the best out of everyone.

It may be ideal to take some time off during the New Moon in Gemini, also being on your own or spending time in a relaxed state of consciousness, in a quiet environment either indoor or outdoor, breathing deeply for at least five minutes, letting your thoughts go and staying simply with your breath.

Then gently stretch yourself and ask yourself:

What can I express in this moment of life, for my benefit and that of the whole? What do I need to learn in order to promote my potential?

After you have asked this question, immediately jot down whatever comes to your mind no matter whether it makes sense or not. Then hide what you have written for two weeks and disclose it on 3 June 2012, one day before the Full Moon on 4 June 2012 at 11:11 GMT. What you have written down will probably make more sense around the Full Moon, and on that occasion you may have the opportunity to act it our more substantially.

See article Be different. Be yourself!

Astroshamanic Seal: a vertical line and a circle with eight rays, of which only six are visible. This seal heals the mind and its capacity to truly communicate and acquiring authentic information, releasing the robotic mind derived from consensus reality. It is about acknowledging and accepting our nature and whatever there is, as simply what it is. This acknowledgement entails fully accepting to express our nature and refusing to pursue others, while also accepting the nature of whoever and whatever surrounds us. The seal also teaches that we do not need to go very far to find what we are looking for. At times we believe that we have to be somewhere else and with different people, that something special has to happen, in order to attain what we want in life. Hence who and what we meet is never enough, for there is the constant expectation of finding something better. The object of our search is indeed always very close, it goes with us wherever we go.

John Maynard Keynes (3.3.5) 5 June 1883 – 21 April 1946, British economist whose ideas, called Keynesian economics, had a major impact on modern economic and political theory as well as on many governments’ fiscal policies.

The State capital and largest metropolis is Tudor located at the eastern end of the State, right at the border with the State of Harte, emanating as an uninterrupted continuation of the Hartemian  Hyper-metropolis. Tudor is a global city and multidimensional centre for communication, diplomacy and multiversal co-coperation, because of the presence of various inter-universe organizations, including the headquarters of several agencies of the United Creations (UC). It is also the place where the first Handorian Interstate Treaty was signed, leading to the final establishment of the Handorian State System. The capital hosts The Tudors, which is one of the three top squads of the Sacred Cone Handorian League.

The national capital is Tudorinc, whose major feature is the vast orange shining palace of Tudorinc, the nation capital. The Tudor team is indeed the most famous of all Handorian teams.
Tudorac is on the sacred Pulmonary Path, which starts at Pulmonic.