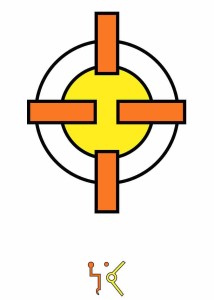 In the Astroshamanic Binary System Sun in Gemini (3) and Moon in Leo (5) constitute Binary 3.5, or Binary number 29.

This binary shines its mental qualities into the world, drawing attention for the charismatic nature of its communication and the capacity to hold it with extreme agility in all types of situations. This configuration is ideal for using movement and language to express one’s intent, or simply as a way of generously dispensing power and passion.

Gemini and Leo promote luminous thoughts, allowing them to be projected and reflected in the outer life. This can fortify our visions, facilitating their communication and circulation. Regardless of what is happening around us, we are what we think, and our power lies on being aware of what we think, and of the effects of our thoughts in the reality they create.

This lunar stage challenges us to be bold and express our true thoughts and feelings. How often do we block ourselves only because we are afraid to appear ridiculous, impudent, proud, or to be judged and misunderstood? Or, and this can be even worst, because we believe that what we think comes from the ego? When we have these type of reservations and fears, the ego itself is at work.

The ego is based on illusions and lies. Hence its favourite strategy, especially amongst spiritual and sensitive people, is to pretend to fight and repress itself. All these concerns and obsessions about finding out the ego in ourselves and others is a witch hunt organised by the ego itself in order to keep receiving attention. Gemini and Leo are an invitation to be in the present moment, freely and trasparently expressing ourselves, letting go of hypocrisy, and allowing others to do the same.

“Welcome is every organ and attribute of me, and of any man hearty and clean. Not an inch, nor a particle of an inch, is vile, and none shall be less familiar than the rest. I am satisfied—I see, dance, laugh, sing.” (Walt Whitman, Sun in Gemini, Moon in Leo, Ascendant in Aries)

Sun in Gemini and Moon in Leo are in a sextile (60°) aspect, which involves two complementary signs, sharing the same polarity, yet not the same element. The binary can work harmoniously and provide beneficial opportunities as long as there is awareness and clarity of intention on both sides.

Astroshamanic Seal: a double circle with two vertical and two horizontal lines emanating from the centre. The seal portrays a sunflower, with four emphasized large petals. The sunflower is the messenger of the Sun, never losing sight of the solar logos, being attentive to its guidance and bestowing its messages to the world. The vision involves a large field of sunflowers, all following the path of the Sun. “Always look at the Sun. Follow the Light. There is nothing else to do. The Sun is the Intention. Whether there is darkness or light, you follow the Sun where it always shines, which is your Third Eye, your pineal gland. And in order to discriminate between the real Sun and its outer symbolic reflection, outer symbolic darkness is needed.” This seal supports the diffusion of luminous thoughts in the world, their focused circulation, bestowing happiness and true perception to the outer and inner environment, to give shape outwardly to whatever we treasure inwardly. This binary seal is also related to the acquisition of astroshamanic matrix stones, such as those employed for the construction of Astroshamanic Healing Grids.

3.5 – PRINCIPALITY OF TREVOR
This principality lies in the south-central area, comprising a rich coast and sumptuous inner lands, including the county of Pinecone, where the primeval cone mysteries originated. The capital is Previdor, whose main feature is the Trevor Palace, a magnificent golden palace surmounted by a high crystal dome and surrounded by a field of Trevidors.

The emblem of Trevor is Trevidor. This is a multi-dimensional flower very similar to an earth sunflower, with the difference that, since there are three suns in Tudor, its orientation randomly shifts from one sun to the others. Refined Trevidor-seed oil, besides being used to seal the Trevilian stones, is a major ingredient in Tudorian and Hartemian cuisine.

Together with Hatrevilians (8-6), in the United Nations of Handor (Sector 8), this is a nation devoted to the glory of Trevilian, a most celebrated Handorian hero. He is above all known for having devised the Trevilian stones, potent multidimensional healing carriers of Handorian information. Although these items may appear as stones, they incorporate all traditional 3rd-dimensional nature kingdoms (mineral, vegetal, animal) together with the 4th-dimensional kingdoms. These stones are more than ever useful to support the formation and development of sacred relationships and connections. In particular, when applied to alien or mutant human characters, they seem to draw and integrate their original potential and intent.

The Principality of Trevor is on the sacred Pulmonary Path, whose main site is at Pulmonary Lefte (3-5-3).

The Counties of Trevor