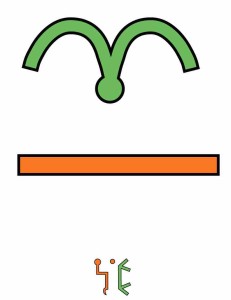 In the Astroshamanic Binary System Sun in Gemini (3) and Moon in Libra (7) constitute Binary 3.7, or Binary number 31.

Those who resonate with this combination are lighthearted, charming, persuasive and influential beings. They are geniuses in the realm of communication, which they employ to promote diplomatic connections, agreements and most expanded networks.

Gemini and Libra are in a trine aspect (120°), which produces an easy, balanced and mutually supporting link between the signs involved. This can bring major benefits when there is clarity of intent and focus. If this is not the case the benefits will develop unconsciously and gained by whoever holds a clear intention.

Astroshamanic Seal: a horizontal line with two semi-circles above, joined by a small circle. The image portrays a luminous bird flying high and gaining the wider perception of what is below. The seal promotes the power of the mind and our capacity to use our thoughts to manifest what we choose to create and be in life. It brings awareness on the fact that every thought we have stems either from a separating or  healing intention. This realisation bestows the faculty to promote only the thoughts that are aligned with our authentic intention, while releasing all others. It also allows to perceive the largest picture of any situation we find ourselves, providing the the luminous bird’s perspective.

Joseph Pujol: born in Marseilles on 1 June 1857, with the airy binary Sun in Gemini and Moon in Libra plus grounding Ascendant in Capricorn, le Pétomane (French for “Fartist”), as he was widely known, was a professional farter and entertainer most popular in Victorian times. He had the astounding power of breathing in air by his anus, just as ordinary people breathe in by the mouth. Then through the air contained in his intestines, he could at will reproduce all sorts of sound. Some of the highlights of his theatre performances involved playing a flute through a rubber tube in his anus and farting sound effects of cannon fire and thunderstorms. Another popular number became the popular rhyme, which Pujol himself composed, about the old farm and all its animals, which he punctuated with the usual anal renditions of the animals’ sounds. His performance were so amusing that often people in the audience literally fainted and needed medical assistance from laughing so hard.