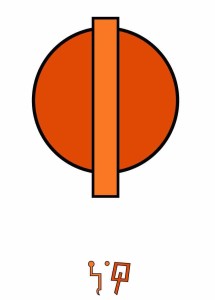 In the Astroshamanic Binary System Sun in Gemini (3) and Moon in Taurus (2) constitute Binary 3.2, or Binary number 26.

Sun in Gemini and Moon in  Taurus  form a semi-sextile (30°) aspect, connecting two consecutive signs, with completely different energies, yet intimately linked in the flow of the zodiac signs. Their energy can work effectively if they are supported by a determined and focused will. The Sun sign, Gemini, provides the sense of direction, the flexibility and dexterity, to hold the binary together, while the Moon sign, Taurus, contributes determination and patience to consolidate pragmatic results. Issues may arise if Taurus’ stubbornness and slowness takes over, disregarding the intellectual and versatile elements of Gemini.

When the waning Moon is in Taurus at 30° from the Sun in Gemini, this is the final part of the phase of Balsamic Moon, or Waning Crescent Moon, the completion of the lunation cycle leading to the New Moon. It is a  crucial time of release and healing, leaving space for whatever need to be ultimately completed or let go of before moving on to another lunation. The main focus in this phase is a work of release and surrender. At this stage it is possible to feel confused, overwhelmed and face crisis. It is a process of major fermentation, in which it is vital to hold a sense of purpose, while also accepting uncertainty and nebulosity as part of the process. The question here is: “What do I release? What do I take in the next cycle?”

Astroshamanic Seal: a vertical line in the middle of a circle. This seal is about giving practical shapes and forms to thoughts. In the binary vision a sphere is inserted in my head. The sphere presses the forehead and rotates at maximum speed, distributing rightful information. It descends in the throat and then in the heart, doing the same. A cone punches my forehead, throat and heart.

The seal involves allowing whatever is manifested to be aligned with the highest intention. In the astroshamanic epic this highest intention is called Kahesha Opa, and is conveyed by a song, used for astroshamanic voyages and other healing practices. It is a love song devoted to the highest possible intention and purpose, so high that it cannot be conceived or described in any language. As a result, it is not possible to translate the song. Like all astroshamanic songs their meaning also changes according to circumstances. Nevertheless forlorn attempts at translating are possible and even encouraged, such as the one below. Once “Kahesha Opa”, the highest intention, is acknowledged all other intentions can follow, including simple and mundane ones, and yet they will all be drawn by Kahesha Opa as the primary focus.

In this traditional song the first term is “Kahesha Opa”, the highest intent, then other words are used representing further intentions, such as Pahai (Sacred Cone, or release, forgiveness), Sadoh (Spirit Guide, Hioly Spiriti), Kurandah (Healing Saint), Mandira (the Temple), Etnai (the Sacred Tribe or community), etc. As the song continues one can add any intention, yet in the end it all returns to Kahesha Opa.

Kahesha Opa, you are the highest possible intention and purpose. You are so high that I do not have any clue about what you are. You are so high that I cannot reach you. All the day and night I pine for you, not knowing what to do. For I don’t know what you are and you are the highest intention. Maybe one day I will meet you, yet what do I do until you come? I will pursue all the intentions that resonate in my heart. Knowing that since you are the highest you contain them all. Yet please be aware that you are my true and final intention. That I long for you. And that I am vigilant for you to come at any moment. And when that moment does come I will surrender to you. And that moment comes….

Eduardo De Filippo: born on 24 May 1900, with Sun in Gemini, Moon in Taurus and Ascendant in Libra, he is a mythical Neapolitan playwright and actor. Most of his works are in the Neapolitan dialect, combining comic and dramatic elements, farce and pathos. Among De Filippo’s well-known plays are Natale in casa Cupiello, Napoli milionaria, Filumena Maturano and Il figlio di Pulcinella.  Theatre means to live well and in actual fact what others in life play badly.

3.2 – PRINCIPALITY OF SVANO
As a communication binary nation preceding the New Moon, Svano plays a major role in the functioning of the Sacred Cone, for it represents the culmination of the release stage: the crucial time when we let go of the last layer of projections and unveil the true essence.

This principality abides in the western end of CTP, at the opposite extreme of Tudor Capital. The capital of Svano is Prinsvano, a most vibrant metropolis. Another highly populated city is Cherub, in the northern area, and there are also many other prominent cities and centre. Cherub holds one of the most relevant squads in the Sacred Cone League, i.e. Cherubin C.C.

Svano is a most remarkable Nation for it was here that the term Kahesha Opa, including the related chant, was originally generated and then delivered to the Capital Authority of Tudor for its final definition and transmission.

Kahesha Opa is an experiential term indicating the highest possible Intent. This Intent is so high that there are no words to describe it. For this purpose the term “Kahesha Opa” has been created: to express what cannot be expressed, which is surely a paramount challenge for Tudorians.

These words are surely familiar if you have attended astroshamanic workshops, for they are regularly in the air. A most partial, inaccurate and provisional way of translating the above would be, as I can strenuously put it:

“I am here for a most sacred purpose, yet I have lost memory of it. This purpose dwells in the term Kahesha Opa. My mind is currently too constricted and tapered to unveil what Kahesha Opa is. Yet, since I am edgy and frantic like a mature Tudorian and I have got to do something otherwise I go insane, for the time being and, of course provisionally, I decide to do what follows: to operate the Sacred Cone, to have endless intercourses with the void, which is aimed at retrieving all the words I have lost, so that will enable me at last to build the sacred temple and gather my people, yes my people, because my people are me, and once we are all there, then we can truly say Kahesha Opa!”

Also other terms may follow, still identifying other intentions. What is stressed over and over in the traditional loop of the chant is that, no matter how many intents are listed, Kahesha Opa always has priority. This means that the moment when I become aware of what Kahesha Opa is, I will fully and ecstatically embrace it, joyfully releasing all other intents. Again, this is a forlorn and erroneous translation, for the true essence of Kahesha Opa is drawn by the chant itself, which is the reason why it is actually chanted.

There are several trails in Svano serving the purpose of enhancing the chant of Kahesha Opa, and if you wish you could take one of them. The starting point of such trails is usually the temple zone of Chant of Svano near Prinsvano.