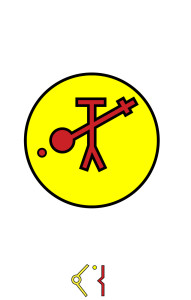 In the Astroshamanic Binary System Sun in Leo (5) and Moon in Aries (1) constitute Binary 5.1, or Binary number 49.

Sun in Leo and Moon in Aries generate huge quantities of energies, which those who resonate with this combination can employ to launch themselves into enterprises requiring courage and fighting spirit.

5.1 stimulate natural, dynamic, outgoing warriors and leaders. They go after what they want with no hesitation, pursuing it with confidence and imperial stance.

The challenge here is to replace instinctive desires with Intent, directing impulsive drives towards the creation of honourable results. Results are honourable when they draw from the ancestral realm and bring benefits to both current and future generations.

This is a Disseminating Moon or Waning Gibbous Moon binary. It is traditionally a receptive time, when existence may either ask or offer something. This makes it an ideal moment for tuning in to the original Intent and operating with coherence.

What you have put in motion, needs to be concluded with integrity and commitment. When you do not complete creative cycles you tend to separate from the flow of life and feel confused or depressed. It is also a time of communication where the information you release in the interaction with others can contribute to create balance and clarity. This requires the alignment of the Intent with the Function, your individual perception with that of the whole.

Given the fiery 5.1 nature of this Disseminating Moon, there is something that needs to be openly expressed and exhibited, with generosity, focus and courage. It is not a time for compromises or complex pondering. This is the opportunity to go beyond the traps of conventional self-consciousness, taking a leap into your inner flaming hero, landing in the spotlight zone of the stage and finally acting out your performance

Leo and Aries are in a trine aspect (120°), which produces an easy, balanced and mutually supporting link between the signs involved. This can bring major benefits when there is clarity of intent and focus. If this is not the case the benefits will develop unconsciously and gained by whoever holds a clear intention.

Astroshamanic Seal: A potent shout emanates from the Sun, as a great warrior with gold armour comes out of the Sun itself and descends on Earth, distributing energy and enthusiasm. He luminously moves and stimulates action. I call the representatives of each one of my Intents, and the warrior illuminates them all with his light. He raises his left hand and receives the light of the Sun. In his left hand he receives a solar shield and in his right hand a luminous sword. His shadow is gold. “This work evokes the moment of separation and the following quest for the lost parts. At this pristine stage you are called to recover one of these parts, the Beloved. This is the piece incessantly projected towards those in the third-dimensional world that cause either peaks of love or rage.”

José Silva, born on 11 August 1914, American parapsychologist (d. 1999), author of the Silva Method, Sun in Leo, Moon in Aries, Ascendant in Gemini, Saturn-Pluto Instrument. Silva believed that the brain was more energetic when it was less active, and that at lower frequencies the brain received and stored more information. The crucial problem for Silva was to keep the mind alert at these frequencies, which are associated more with daydreaming and sleep than with practical activity.Silva experimented with hypnosis, but while hypnosis made the mind more receptive, he felt that more individual control was necessary for improving brain function. He experimented next with mental training exercises to quiet the brain yet keep it more independently alert than in hypnosis. This, he reasoned, would lead to improved memory combined with understanding and hence to higher I.Q. scores. The exercises from which Silva’s techniques evolved called for relaxed concentration and vivid mental visualization and ways of reaching lower levels. He believed that these levels proved more effective in learning than the fully awake, or beta wave, level.
We don’t batter down doors. If you keep encountering obstacles, then back up and look around, you might see another door that will open easily for you.
How much help you get, from higher intelligence, depends on how big your plans are. The bigger your plans are, meaning how many people will benefit, the more help you will qualify for.
May the rest of your life, be the best of your life.
Love one another means to help one another.
There is no such thing as a problem without a solution, only problems for which we do not yet have enough information to know what the solution is. When you have enough information, it is easy to solve a problem.
A spontaneous event with detrimental end results is an accident. A series of accidents tells us that we’re doing something wrong. Either we are not getting divine guidance, or we are being advised that we are going in the wrong direction. A spontaneous event with beneficial end results is a coincidence. This could be good luck, or it could be divine guidance. How can we be sure that it is divine guidance? A series of coincidences on the same subject is surely divine intervention. Nobody working on their own is lucky every time. Divine intervention is what is known as God helping without showing His hand.
All religions are good because they appear to be doing their best at enhancing the spiritual factor of the human being. The only thing that we need to watch out for is their representatives.

Paul Tillich (5.1.4) German-American theologian (1886-1965). ne of the most influential Protestant theologians of the 20th century. Among the general populace, he is best known for his works The Courage to Be (1952) and Dynamics of Faith (1957), which introduced issues of theology and modern culture to a general readership. Theologically, he is best known for his major three-volume work Systematic Theology (1951–63), in which he developed his “method of correlation”: an approach of exploring the symbols of Christian revelation as answers to the problems of human existence raised by contemporary existential philosophical analysis. The courage to be is the courage to accept oneself, in spite of being unacceptable.

Stuart Holroyd, 5.1 (10 August 1933 in Bradford, Yorkshire) British writer, associated with Colin Wilson, Bill Hopkins and the literary movement of the Angry Young Men, author of Emergence from Chaos (1957) and of books on the paranormal, parapsychology, encounters with extraterrestrial life, gnosticism (The Elements of Gnosticism) and the philosophy of Krishnamurti.

Alan Leo, (5.1.5, Saturn Instrument, Pluto Flower) British astrologer (1860-1917), theosophist, considered by many to be the father of modern astrology. As a result of his studies in India, he later attempted to incorporate portions of Indian astrology into the western astrological model that he had created, and although this synthesis of the two traditions never fully caught on in the west, there were a few specific techniques that were picked up by later astrologers such as the decanate and the dwadashamsha.