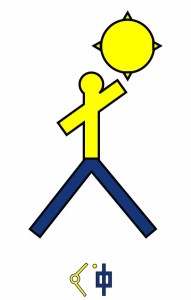 In the Astroshamanic Binary System Sun in Leo (5) and Moon in Capricorn (10) constitute Binary 5.10, or Binary number 58.

This is a blend of fixed fire and cardinal earth. The pattern Sun in Leo and Moon in Capricorn mixes Leo’s warmth, generosity and vitality with Capricorn’s ambition, discipline and determination.

Those who resonate with this combination have a vivid clarity regarding their goals and the capacity to strenuously manifest major results. They may expose a joyful, beaming and playful attitude, while simultaneously radiating unbending integrity and purpose. Their public impact and repute in the marketplace is impressive, as well as their ability to climb the ladder of success. All they need to do in this respect is to fully embrace their veritable life calling and let it shine spontaneously, accepting the right to employ all the necessary resources, being available to manipulate physical forms so as to attain the desired goal and feeling entitled to rule as vicarious representative of the solar power.

Leo and Capricorn are in quincunx aspect, an angle of 150°, which is five-twelfths of the 360°. This aspect tends to cause slides into parallel universes affecting what happens in your everyday reality. The influence can be moderate, yet in some circumstances rather abrupt. Depending on the multidimensional conscious openness of the elements involved it can be experienced in harmonious or disharmonious ways.

Astroshamanic Seal: a sun touched by the fingers of a being. The seal exemplifies the power to manifest one’s intent through the Sun.

The Way of Solar Discipline

The term discipline comes from Latin discere “to learn” and discipulus “learner”. Hence, it has no original reference to obeying rules, controlling or punishing.

Discipline merely implies the availability to learn through experience. It is not about adhering to a specific doctrine or system of knowledge. This is not discipline, it is the way the separated reality, i.e. the Human Arbitrary Configuration (HAC), programmes human beings. We call it here HAC encoding, which involves acquiring the capacity of reproducing information and applies to processing units, computers, androids and, alas, ordinary human beings.

This is the way of HAC, the advocate of encoding, and a capricious connotation of discipline. Here discipline means control and repression, which are ways of separating something from something else.

True discipline is experiential learning. Unless I experience something, I will not be able to learn it. No matter what I have been told about something and what ideas, emotions, feelings I hold about it, if I have not thoroughly gone through it, there is no learning. As a result, the lesson will hang around in a waiting chamber. I can provisionally ignore that chamber and choose to reside in a sheltered room. I can pretend other chambers do not even exist, glorifying the integrity of my sheltered room, with all its idols and gadgets. Yet, those who are hanging around in the waiting chamber will sooner or later get upset, and at a certain point burst out and invade my sheltered room.

Discipline is a learning process only when it comes out of direct experience. There are millions of books, movies and people telling me what to do or not to do, what things are good or bad. Discipline means putting aside this information and facing direct experience.

Discipline has to come from my centre, the solar plexus zone, linking me to the Great Tree of the spine, reaching upward through the heart and downward into the roots of my being.

This is solar discipline, the way of 5.10. When discipline comes from someone else, then I am being encoded. Hence, I become a processing unit, a HAC laptop, an android, a fully certified arbitrary human being.

This is how I gain citizenship in HAC. Not surprisingly, pragmatic shamans, like 5.10 ones, are aware that this is a prerequisite. Hence, they do not challenge the encoding system. On the contrary, they use it to their advantage, employing it to promote true discipline and learning, using whatever they find at hand to sustain their intent. Concisely, they accept to be encoded so as to access HAC. Once they are fully integrated, they can then manipulate its resources according to their original intent, which is indeed one of solar discipline.

5.10 shamans are champions of solar discipline, which is the educational way of sacred selfishness. This implies being madly in love with myself, for I am indeed the closest learning device, the primary source of direct experience. If I am unable to acknowledge and learn from myself, if I cannot contact and love the closest zone, which is me, there is no way in which I can reach other beings or dimensions. All I can do is pretending to reach or love them, which is precisely the major policy of HAC. This is the encoding. This is the sheltered room, with my true self hanging around in the waiting chamber. Hence, in the solar discipline plan everything is organized.

The time of the appointment has been set and nobody is waiting in vain.