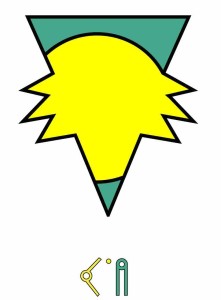 In the Astroshamanic Binary System Sun in Leo (5) and Moon in Scorpio (8) constitute Binary 5.8, or Binary number 56.

The pattern Sun in Leo and Moon in Scorpio jumbles Leo’s generosity, vitality and leadership with Scorpio’s intensity, determination and passion. Those who resonate with this combination are extremely magnetic, and easily experience tremendous outburst of power and a highly charged energy system. Their success is based upon their capacity to direct strong emotions towards specific goals and the exercise of the inborn art of drawing and distributing energetic resources. They are relentlessly determined and at ease in all dramatic roles, with particular regard to controversial ones, and especially when they are at the centre of attention, which may be quite a customary occurrence.

Leo and Scorpio are in a square (90°) aspect. They are both fixed signs, holding the core essence of the direction, season and element they represent, South and West, Summer and Autumn, Fire and Water respectively.

Astroshamanic Seal: a triangular shape with three small triangles on both sides. The seal represents the Sun tearing a nocturnal setting. It emphasizes the power involved in release and the activities of the Sacred Cone, transforming darkness into light, yet allowing the transformation to occur spontaneously and effortlessly, as a result of the release itself. It stresses the function of being a pure channel, without interfering with the transformation process, which pertains to alternative forces.

Karlheinz Stockhausen, (5.8.5; Neptune Power) German composer (d. 2007)
Along with John Cage, is one of the few avant-garde composers to have succeeded in penetrating the popular consciousness. The Beatles famously included his face on the cover of Sgt. Pepper’s Lonely Hearts Club Band. This reflects his influence on the band’s own avant-garde experiments as well as the general fame and notoriety he had achieved by that time (1967). In particular, “A Day in the Life” (1967) and “Revolution 9” (1968) were influenced by Stockhausen’s electronic music (Aldgate, Chapman, and Marwick 2000, 146; MacDonald 1995, 233–34). Stockhausen’s name, and the perceived strangeness and supposed unlistenability of his music, was even a punchline in cartoons, as documented on a page on the official Stockhausen web site (Stockhausen Cartoons). Sirius star system: In the German newspaper Die Zeit, Karlheinz Stockhausen has unmistakably stated that: I was educated at Sirius and want to return to there, although I am currently still living in Kürten near Cologne. At Sirius, it is very intellectual. Almost no time passes between conception and realization. What is known here as the audience, passive bystanders, does not exist there. There everyone is creative. (translated from the German: “[…]

State of Harte, Realm of Sartemith, 5.8:

Among the three sacraments contemplated in the Gospel of Philip, the Bridal Chamber is referred to as the “holy of the holies” (parallel to the Sacred Cone’s third stage), after “the holy” baptism (first stage) and “the holy of the holy” redemption or atonement (second stage). Most Gnostic texts describe Jesus as the hero, or returning Adam, descending to overturn the Fall, i.e. to release the separation between polarities, which he had initiated, and restore CMI, i.e. the united androgynous self. This enterprise is achieved through the Sacrament of the Bridal Chamber, a reunion that is tantamount to Adam reabsorbing Eve, or vice versa.

“The anointed Christ came to rectify the separation and join them together. Now, a woman joins with her husband in the bridal bedroom, and those who have joined in the bridal bedroom will not reseparate.” (Philip, 70:12-20)
The Exegesis on the Soul, is a short Gnostic papyrus narrating a concise version of the above myth. Here, the soul had once an androgynous form and lived with the Father. Then she fell and polluted herself with lovers. They treated her as a whore, and then abandoned her. In pain she looks for other lovers who behave similarly, until she becomes addicted to sexual slavery. The soul continues to live in an itinerant brothel, moving from market to market, and receiving as payment the polluted seed of her lovers, which produces horrible children.

The soul remains in this grieving state until, after having reached the climax of despair, she finds the courage to ask for help to the Father. He then operates as follows: first, he makes her womb shift outward so that it can reawaken its power, i.e. it moves outside like a male genital organ. In this way she is protected from further contaminations from her lovers. Then, the Father sends a bridegroom, who is her original brother. The soul welcomes her bridegroom in the bridal chamber and they love each other with great passion. The fruit of their union are good and beautiful children. Finally, the soul regenerates and returns to her original state of unity.
The Gnostic Jesus exemplifies the androgynous state in which the union of the binary system has been achieved. Here the path of initiation of human beings involves uniting with their opposite multi-dimensional polarity. Until they manage to do so, they provisionally experience this polarity in the opposite sex,[i] whose function is merely that of the gatekeeper, with all the implications of both the bona fide horny bit and the consciousness rerouting device. Eventually, this is a multi-dimensional non-HAC enterprise that implies the union with the “heavenly bridegroom”, the inner opposite polarity and the transparent re-establishment of the link between CMI and HAC. As part of the shamanic initiatory training one has to experience both the part of the androgynous bridegroom and the HAC separated soul.
For the Gnostic tradition the bridal chamber is the arena of reunion of soul and spirit, male and female, and the release of the unilateral perception based on separation. Again, this does not mean that separation and HAC are wrong. “Light and darkness, life and death, right and left…are inseparable. (but) neither are the good good, nor the evil evil…each one will dissolve into its original nature. But those who are exalted above the world are indissoluble, eternal.” (Philip 53:10-25)
In the Gospel of Philip there are also references to a sacred embrace, which is an intercourse based upon the blending of the two polarities, or binary system, and their expansion into the trinity, i.e. the return to the original unity. This practice may appear similar to a sexual interaction, which is what makes it extremely controversial, yet it is described as devoid of lusty, romantic or procreation intentions. As for the pragmatic nature of this sacred embrace, the Gnostic texts appear to describe it as an experience similar to tantra, an intercourse without physical orgasm.

“The embrace that incarnates the hidden union… is not only a reality of the flesh, for there is silence in this embrace. It does not arise from impulse or desire; it is an act of will.” (Philip, 122)

In the Gospel of Thomas, this practice is depicted as the way to connect with our primal multi-dimensional identity and establish a link with human separated reality.