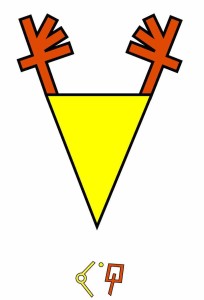 In the Astroshamanic Binary System Sun in Leo (5) and Moon in Taurus (2) constitute Binary 5.2, or Binary number 50.

This is a determined blend of fixed fire and fixed earth. The combination of Sun in Leo and Moon in Taurus allows the energy of the Sun – with all its creativity, exuberance, playfulness, generosity, and majesty – to be firmly grounded in the practical reality.

When you align with this binary you become potent and pragmatic, gaining the capacity to venture into enterprises requiring solid leadership and unbending focus.

5.2 shapes natural masters who know how to lovingly draw people and resources in order to get things done, generally in the best possible way.

Astroshamanic Seal: a triangular shape pointing downwards with two wrists and hands on the upper part. It portrays a cone of fire burning.

This metropolitan nation and its homonymous hero are celebrated for their mind-blowing building capacities. The whole Hartemian capital district of Hartem City and the Handorian Quoin were designed and erected primarily by Hardo folks. These colossal structures constitute a climax in whatever can be humanly conceived in terms of manifestation.
I invite you to liberate your fantasy and imagine the most outstanding and majestic building environment you can envisage. Firmly picture it in your mind, find a way to give it a shape that you can remember. Allow it to be a centre of generous unconditional power and love. Let it be a living reality in your life, as it is for me and the Hardo folks. Handor is not a personal invention. It is the apex of all human highest desires and passions. It is what truly animates every single aspect of daily life. It is irrelevant the way you call it. It is crucial the way you experience it.
5-2-1 REVEREND HERO, R.Suraka
5-2-2 ROCK HONEYCOMB, R.Surara
5-2-3 EGO (Ego), R.Surama
5-2-4 ECHO (Echo), R.Suraqu
5-2-5 RADIO (Radio), R.Surasu
5-2-6 EMBRYO (Embryo), R.Suraks
5-2-7 HARMAYO, R.Suraat, Papillary Muscle
5-2-8 ROSCOMIO, R.Suraha
5-2-9 RED PATIO (Red Patio), R.Surani
5-2-10 EAST HARDO, Rata Sahe Hardo, R.Surasa
5-2-11 ROYAL HARDO, R.Suraur
5-2-12 RED DOORKNOB, Mahe Rahe Hardo, R.Surata