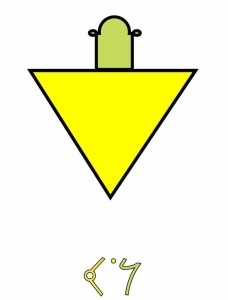 In the Astroshamanic Binary System Sun in Leo (5) and Moon in Virgo (6) constitute Binary 5.6, or Binary number 54.

This is a blend of Fixed Fire and Mutable Earth. Fixed signs (Taurus, Leo, Scorpio, Aquarius) constitute the power and reservoir zones of their own element. 5.6 folks consolidate and accumulate the elemental force, which is then distributed by the mutable signs (Gemini, Virgo, Sagittarius, Pisces), the champions of mobility and integration. The shift from New Moon to the following Sun and Moon dynamic is a most crucial one, since it determines the orientation of the newborn lunar cycle. This is the moment where I come to terms with the preliminary stages of manifestation. Here there are two basic options: to reroute the energy generated by the New Moon into HAC perceptual routine, or to explore an alternative paradigm of reality based on the seed conscious Intent generated at New Moon. When the Sun and Moon are conjunct, the two polarities are united and unveil the third pole, which is the manifested evidence of their trinity union. Yet, as the lunar cycle progresses, the third pole is degraded to the split polarity of an arbitrary binary system, which is the foundation of HAC, i.e. human separated reality. Hence, in this current context, the Sun remaining in Leo and the Moon moving in Virgo exemplify this shift from unity to separation. A careful study of the 5.6 dynamic can shed light on the mechanics of human separated reality and on the implications of an alternative multi-dimensional shift. Yet, be aware that this is 5.6, which may also lead to a climax of radiant intricacies.

The pattern Sun in Leo and Moon in Virgo mixes Leo’s exuberant generosity, vitality and leadership with Virgo’s healing service, versatility, discrimination, precision and cautiousness. It comes right after the New Moon, following an apex of luminous creative power. Hence, this combination has the responsibility of getting down to work and implementing what was generated during the majestic encounter of Sun and Moon in Leo, acting out of pure and enlightened service, carrying out the original Intent.

Here the approach to service is radically different from the one typical of HAC. In Sector 5 service is not an act of duty or something you do for other people. It is not about working hard and sacrificing yourself in order to achieve ecstasy or whatever you wish for in the future. On the contrary, it is about first experiencing the climax of ecstasy and power, then spontaneously moving into service, perhaps without even being aware of the shift since ecstasy and power continue to be there. This is why Leo is followed by Virgo. The passion to work and serve is the direct result of the unio mystica of the Sun and Moon in Leo. Thus, after being unconditionally energized by the Sun, it comes natural for the Moon to swing to Virgo and serve at its best. When I am abundant with power, beauty, love and whatever is desirable, then there is no effort in giving and serving. Quite the reverse, I do it for the sheer pleasure of doing it, and I do not expect anything in return. Furthermore, I am grateful because I find an outlet and beings that thoroughly enjoy what they receive from me. Service is not a way to accomplish something in another dimension. It is a way of celebrating the inherent ecstasy of this present moment, and let if flow, expand, amplify and manifest in whatever surrounds me.

The New Moon in Leo is a time for radiant introspection and acknowledgment of the solar plexus, especially the aspects of its vital force that tend to be pushed aside or misused in human societies. The solar plexus – hara or manipura – is often regarded as the first form generated in the womb of the mother, the source from which everything else grows. It is the primal matrix of our multi-dimensional life, the trinity form engendered by both polarities (the father and mother’s seed), and the stellar centre operating as veritable energetic core identity, no matter whether I am aware of it or not. The more I move away from the solar plexus, the more I lose my own authentic radiance in the universe, the less I respond to the synergetic structure of the galaxy, and the more I detach myself from real life. The condition of being truly third-dimensionally alive abides in the alignment with the solar plexus, which is the zone that most humans are unable to utilize due to its incompatibility with consensus reality.

In many shamanic traditions the universe is experienced as a multi-dimensional web of life, consisting of copious layers. Here human perception of reality is merely a separated fragment of one of these layers. As a result, although they are part of a vaster reality, human beings access only a most limited and secluded definition of who they are. My shamanic lineage regards CMI as a diamond form similar to a double cone. This is the astroshamanic Sacred Cone, which is considered as the CMI itself. The solar plexus centre is described as the power zone of the lower cone, while the head centre refers to the higher cone, and the heart centre is the point in the middle, the bridging areas where the two cones meet and unveil their original trinity. According to various epic shamanic contexts, in the human race these centres are located in a peripheral, or strategically capricious, configuration (HAC), which is virtually separated from CMI, or Sacred Cone. Thus, humans are autistic energetic forms with edges that do not allow the transit of energy. This means that they can only refer to the energy available in their virtual configuration. This arbitrary configuration produces our human hallucinatory perception and the conviction that this is the only reality. The human solar plexus appears to be the centre closer to the original vibrations of the Sacred Cone. The head centre is the broadcasting system of human hallucinatory perception. As such, it functions as a routine loop script based on thought impulses strategically disjoined from the web of life. The human heart centre is a more vital zone, based on the echo of the original perception of unity. Yet, since the heart centre is arbitrary ruled and interpreted by the head centre, its primary pulsations are distorted by human prevailing hallucination.

The solar plexus is the basic source of energy for the entire HAC. As such it has to be accessed in an uncontaminated way, devoid of any distortion. Once I tap into the solar plexus I cannot help having a direct experience of the reality existing beyond human hallucination. Yet, the strategic aim of the hallucination is to render this experience as short and unconscious as possible. Entering fully in the solar plexus produces a perception that is incompatible with human consensus reality, while at the same time, and paradoxically, this energy is necessary to generate the hallucination itself.

The solar plexus is the source of our pristine vital energy and the access zone to CMI. Yet the ordinary inclination of human beings is to drive energy away from this centre. The link with the vital energy is manoeuvred by a rerouting device, which disconnects human perception from multi-dimensional non-HAC awareness and leads it into HAC consensus hallucinatory reality. The experiential features of this rerouting device are our most profound fears, terrors, misconceptions and denials, as well as our deepest and most frustrated cravings and desires. The desire element serves the purpose of accessing the energy required for generating the arbitrary reality, while the fear or denial bit ensures the parting from multi-dimensional reality, which is the basic premise for the survival of HAC. How do pragmatically human beings shift from multi-dimensional to consensus reality, from non-HAC to HAC? The answer is strategically exemplified by the shift from binary 5.5 to binary 5.6. In binary 5.5 both luminaries are in Leo and experience the highest climax of solar energy. In the disfunctonal development of binary 5.6, as the Moon moves in Virgo, the pressure of HAC takes over, leaving behind our solar multi-dimensional perception and boosting the emergence of human separated reality. Here this process is promoted by Virgo’s typical grievances: worry, criticism, guilt, unworthiness.

During the New Moon there is a tremendous upsurge of solar plexus awareness, and a momentary gap in the functioning of the energy rerouting device. Another major increase will occur with the next Full Moon, yet the energy at that stage will be directed by the process generated at the beginning of the lunar cycle. Hence, in the days following exact New Moon, it is vital to acknowledge what was truly powerful and significant at that time. Perhaps you can sit quietly and allow yourself to express this in whatever way feels appropriate for you: painting, writing, drawing, singing, speaking, etc. Binary 5.6, like other binaries preceding the New Moon, is the key operative element of the human rerouting device. Here, you are confronted with the opportunity of either succumbing to Virgo’s grievances or bypassing them and accessing non-HAC. Hence, if in the preceding days you have strenuously articulated the basic question (What is my Intent?), without being concerned about how to accomplish it, now you are called to take the first decisive steps for its manifestations. Yet, it is vital that you release all concerns and direct them towards your Intent. “Sector 6 deals with the stage of selection and assimilation in the cycle of Sectors around the Sacred Circle. It is a phase that requires an attentive work of discrimination between what is useful and what needs to be released. This involves filtering or storing the essence of every form, directing it towards the Intent, and discarding the rest. Here it is essential to focus on the resources that are extracted and their redeployment according to a conscious Intent, rather than on the wastes that are expelled. Otherwise, waste material is held on to, blocking the process of assimilation and the awareness of the Intent. Hence, being confronted with Virgo’s grievances during a binary 5.6 is part of the deal. What counts here is that I do not miss the other side of the deal.

Astroshamanic Seal: a triangle surmounted by a form, representing a large storehouse. The storehouse contains all the resources needed by the Sun.