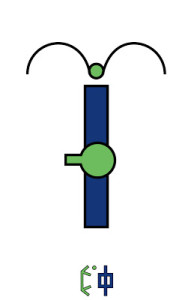 In the Astroshamanic Binary System Sun in Libra (7) and Moon in Capricorn constitute Binary 7.10, or Binary number 82.

This binary is a mix of cardinal Air and cardinal Earth. This pattern blends Libra’s balance, gentleness, harmony and diplomacy with Capricorn’s ambition, discipline and determination.

Those who resonate with this combination are capable to achieve outstanding results through the harmonious blending of their artistic, extrovert and uninhibited nature with discipline, hard work and determination.

This binary combines the social and graceful Libran approach with the rigorous ambition of Capricorn, which is a guarantee for manifesting prolific results and climbing the ladder of public success.

7.10 can be master in manipulating or controlling people and resources, yet in a way that potentially allows all parties to equally benefit. 7.10 require a solid structure and boundaries in order to reveal its authentic talents and emotions, especially as regards relationships. In this field, when the right conditions are at work, it proves to be most loyal and reliable, capable of formidable endurance, patience and commitment. Somehow 7.10 may draw benefits from rigid applications in the ordinary reality as strategic shelters to implement multidimensional potentials.

Qualities: tactful and diplomatic organisational managing, organisational and directive skills, grounded sense of responsibility in the sphere of relationship, social agreements and contracts, capacity to work hard and achieve results, yet in a graceful way and with sensitivity towards others and the environment.

This is a 7.10 First Quarter Moon occurring when the Crescent Moon in Capricorn forms a square (Å), a 90° aspect, with the Sun in Libra. It is an active phase, when the Moon moves outside the orbit of the Earth toward that of Mars.

This is a time when we are confronted with the need to act out whatever was conceived during the New Moon, perhaps following a crisis, trial or obstacle. There may be tension and a sense of compulsion to do something about it here, triggering fear, anger and other grievances, conscious or unconscious.

The energy can be rather charged, making it the ideal moment to act out, take courageous initiatives, go for it, and do what feels right. Here you have the possibility to choose either to be a creative protagonist or a passive victim of events.

Breathing deeply, being aware of one’s body and physically releasing excessive tension through dynamic movements or shamanic postures while holding a focused Intent can be very helpful here, as well as practising rituals, such as the Basic Ritual of the Sacred Cone.

On a First Quarter with Moon in Capricorn and Sun in Libra the time may be ripe to be pragmatic and operate in accordance with your Intent, or whatever was identified as a goal during the New Moon. It is generally not a time for procrastinating, compromising, thinking or visioning.

The question is: “What do I do right now to set in motion the Intention? What do I need to practically act out in order to promote the Libra’s qualities of harmony, cooperation and rightful relationships?” The key here is not on taking time to get the true answer, which has been probably known for a while, or indulging with doubts and concerns. The key is on simply doing it, patiently acting out the answer, or even allowing the action to provide the answer.

This First Quarter is cyclically related to the Spring Equinox and since in the case of a 7.10 First Quarter it takes place shortly after the Autumn Equinox, this triggers all the intentions carried over from the previous spring.

Love is here; it is the blood in my veins, my skin.
I am destroyed; He has filled me with Passion.
His fire has flooded the nerves of my body.
Who am I? Just my name; the rest is Him. (Rumi)

Astroshamanic Seal: a vertical line surmounted by the outline of a flying bird. The vision of this seal is the following:
“Here you confront with your responsabilities and the relationships’ promises. You need to connect with the forces and ask them for guidance.”
A Wand comes. It represents the law of relationships. I surrender to this law and am ready to face whatever is dictated by it.
“You are paying the price of the law through what you experience now. This is what you need to release through the Sacred Cone.”
The Eagle flies and carries me upon a mountain. From there I observe the Graha of S7 in all its extension. I move along its territory to provide healing. “Time is needed. Do not be disturbed by time and keep singing your songs. Trust that you are operating according to the sacred laws. You are undoing the past through your songs. In order to return home you need to sing. Do not be overwhelmed by what you see. Hold the Wand firm and allow it to remind you of your songs and promises. You are keeping your relationships’ promises, those you made in Handor, the only ones that count.”

Italo Calvino, 7.10.8 (15 October 1923 – d. 1985) Italian writer, one of the most popular Italian fantasy fiction writers, also widely read in Britain. He is also one of the celebrities listed above with Sun in Libra and Moon in Capricorn respectively, yet with Ascendant is in Scorpio. This gives him a 7.10 binary with elements of 7.8 and 8.10. He is a very familiar name in my Italian early formal education years for it was one of the authors, together with G. Salinari, of a three-volume school text (one for each of the three years of the Scuola Media). I remember this text in particular for it was the bulkiest and heaviest of all the books I had to carry in my school case. Some of the works that contributed to give him international fame are: Il visconte dimezzato (The Cloven Viscount): the story of a man split in two (a good half and an evil half) who becomes whole through his love for a peasant girl; Il barone rampante (The Baron in the Trees): a capricious tale of a 19th-century nobleman who one day decides to climb into the trees and never sets foot on the ground again, yet from the trees he participates fully in the affairs of his fellow men below. Il cavaliere inesistente (The Nonexistent Knight): a mock epic chivalric tale.
Myth is the hidden part of every story, the buried part, the region that is still unexplored because there are as yet no words to enable us to get there. Myth is nourished by silence as well as by words. (Italo Calvino)
Everything can change, but not the language that we carry inside us, like a world more exclusive and final than one’s mother’s womb. (Italo Calvino)

Jalal al-Din Muhammad Rumi, 7.10 (30 September 1207 – 17 December 1273) known to the English-speaking world simply as Rumi, 13th-century Persian Muslim poet, jurist, theologian, and Sufi mystic. One of the most read and popular poets in the world.
“Start a huge, foolish project, like Noah. It makes absolutely no difference, what people think of you.”
“Burdens are the foundations of ease and bitter things the forerunners of pleasure.”
“Everyone is so afraid of death, but the real sufis just laugh: nothing tyrannizes their hearts. What strikes the oyster shell does not damage the pearl.”
“Love is here; it is the blood in my veins, my skin.
I am destroyed; He has filled me with Passion.
His fire has flooded the nerves of my body.
Who am I? Just my name; the rest is Him.”

Paul Brunton, 7.10 (October 21, 1898 – July 27, 1981) British philosopher, mystic, traveler, and guru. He left a journalistic career to live among yogis, mystics, and holy men, and studied Eastern and Western esoteric teachings. Dedicating his life to an inward and spiritual quest. “The ordinary man is aware of his surroundings, first, by naming and labelling them; second, by linking them with past memory of them; and third, by relating them to his own personal self. The illumined egoless man is simply aware of them, without any of these other added activities.”
“This withdrawal from the day’s turmoil into creative silence is not a luxury, a fad, or a futility. It is a necessity, because it tries to provide the conditions wherein we are able to yield ourselves to intuitive leadings, promptings, warnings, teachings, and counsels and also to the inspiring peace of the soul. It dissolves mental tensions and heals negative emotions.” “Man is more miserable, more restless and unsatisfied than ever before, simply because half his nature–the spiritual–is starving for true food, and the other half–the material–is fed with bad food.” “The succession of thoughts appears in time, but the gap between two of them is outside time. The gap itself is normally unobserved. The chance of enlightenment is missed.”

John Reed, (7.10.10) American journalist (Portland, Oregon, October 22, 1887 – Moscow, October 17, 1920) was an American journalist, poet, and communist activist, best remembered for his first-hand account of the Bolshevik Revolution, Ten Days that Shook the World. He was married to writer and feminist Louise Bryant.

King Edward VI of England (7.10.6) (12 October 1537 – 6 July 1553) became King of England and Ireland at the age of nine, son of Henry VIII and Jane Seymour, third monarch of the Tudor dynasty and England’s first monarch that was raised as a Protestant.

This nation occupies the elevated North-West zone of the Grand State of Tanmarg, which is the most mountainous area of the Hanmarian territory. The area comprises the Grandulkan ranges in the north and the Grand Hanmirian ranges in the south. Between the two mountain systems lies the wide cleavage of the Gramirvak plateau. The Nation of Gramirvak is notable for the Rock of Gathak, intimately connected with the Rock of Haxar (State of Kortex, Kingdom of Haxarix, 10-4-4). The Rock of Gathak is in 7-10-10 within a special status zone operated by the Handorian Defense System, the Grand Queen of Gramirvak and the Kiteri Alliance. The capital of Gramirvak is Tormrak (7-10-7), which hosts the highest tower of the State. Other cities are Thorax (7-10-6) and Grah Galatiak (7-10-1)
D7-10-1 Grah Galatiak
D7-10-2 Grah Gramariak
D7-10-3 Tex
D7-10-4 Guck
D7-10-5 Gopak, Tilak, Gayak (singer)
D7-10-6 Thorax, Gathak
D7-10-7 Tormrak
D7-10-8 Tamarisk
D7-10-9 Testatrix
D7-10-10 Grahmirvak
D7-10-11 Tulcanbotox
D7-10-12 Gobbledegook