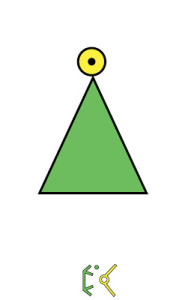 In the Astroshamanic Binary System, Sun in Libra (7) and Moon in Leo (5) constitute Binary 7.5, or Binary number 77.

7.5 mixes cardinal Air and fixed Fire, integrating Libra’s courtesy, friendliness and grace with Leo’s warmth, loyalty, generosity and leadership. This binary has a natural attitude of playfulness and spontaneous confidence in all matters concerning relationships. It shines in the passionate attempt to reconcile opposites and promote loving balance and respect. The nature is generous and gentle. Grievances may involve arrogance, laziness, excessive pride and hedonism.

Sun in Libra and Moon in Leo are in a sextile (60°) aspect, which involves two complementary signs, sharing the same polarity, yet not the same element. The binary can work harmoniously and provide beneficial opportunities as long as there is awareness and clarity of intention.

When the waning Moon is in Leo at 60° from the Sun in Libra, the phase of Balsamic Moon, or Waning Crescent Moon, starts. It is a crucial receptive phase, a time of healing and rest, yet also of intense preparation and completion. Here you prepare for a new cycle, the next New Moon, and let go of the residues of the old. What is mainly needed in this phase is a work of release and forgiveness. It is easy at this stage to feel restless, excited or willing to change everything and start doing something totally new and unpredictable Yet, until you learn to release the grievances recycled from the past, you will never truly create anything new. The question here is: “What do I release? What do I take in the next cycle?”

12 sectors strategically make up the complete structure of our multidimensional identity. Once we learn to retrieve, reawaken and operate those sectors then we are able to expand our awareness beyond the confines of our separated identity and access what lies beyond. What lies beyond, which is our multidimensional self, is always there, yet the demands of our social identity do not leave any energy to be intentionally conscious of its existence. Retrieval of the 12 sectors the purpose of breaking the fixation of our awareness and gaining the necessary fluidity that can allow a tangible expansion of our perception.

Astroshamanic Seal: a triangle surmounted by a circle with a dot within. The seal is connected with the following guidance:

Philip Pullman 7.5 (19 October 1946) English writer from Norwich, best-selling author of several books, most notably his trilogy of fantasy novels, His Dark Materials, and his fictionalised biography of Jesus, The Good Man Jesus and the Scoundrel Christ. The first book of His Dark Materials has been turned into the film The Golden Compass and the first two books from his Sally Lockhart series as well as his children’s novel I was a Rat! or The Scarlet Slippers have been adapted for television. “You cannot change what you are, only what you do.” “All the history of human life has been a struggle between wisdom and stupidity.” “We don’t need a list of rights and wrongs, tables of dos and don’ts: we need books, time, and silence. Thou shalt not is soon forgotten, but Once upon a time lasts forever.” “When you choose one way out of many, all the ways you don’t take are snuffed out like candles, as if they’d never existed. At that moment all Will’s choices existed at once. But to keep them all in existence meant doing nothing. He had to choose, after all.” “If a coin comes down heads, that means that the possibility of its coming down tails has collapsed. Until that moment the two possibilities were equal. But on another world, it does come down tails. And when that happens, the two worlds split apart.”

Paschal Beverly Randolph 7.5 (October 8, 1825 – July 29, 1875) American medical doctor, occultist, Spiritualist, trance medium, and writer. Randolph is notable as perhaps the first person to introduce the principles of sex magic to North America, and, according to A.E. Waite, establishing the earliest known Rosicrucian order in the United States. Famous occultists and practitioners of sex magic Carl Kellner, Theodor Reuss, and Aleister Crowley were heavily influenced by Randolph in both organizing the Ordo Templi Orientis (O.T.O.) and in their sex magic rituals. I. n 1996, the biography Paschal Beverly Randolph: A Nineteenth-Century Black American Spiritualist, Rosicrucian, and Sex Magician by John Patrick Deveney and Franklin Rosemont was published.

Edward Bach, (24 September 1886) Sun in Libra, Moon in Leo, Ascendant in Pisces, British physician, homeopath. “Everyone of us is a healer, because everyone of us at heart has a love for something, for our fellow-men, for animals, for nature, for beauty in some form, and we every one of us wish to protect and help it to increase. Everyone of us also has sympathy with those in distress, and naturally so, because we have all been in distress ourselves at some time in our lives. So that not only can we heal ourselves, but we have the great privilege of being able to help others to heal themselves, and the only qualifications necessary are love and sympathy.”
John Dewey, 7.5.9 (20 October 1859-d. 1952), American philosopher early developer of the philosophy of pragmatism and one of the founders of functional psychology
Nicoletta Ferroni, 7.5.11, Italian counsellor, author

Handorian Reference:
Grand State of Tanmarg,
Nation of Tsusihar
Tsusihar is located in the eastern area of the State of Tanmariat, representing the traditional South-Eastern frontier of the Handorian States System. The capital is Grant Susihal, whose main feature is its the Grant Rock of Hanmar, which is a huge fragment of the Rock of Hanmar located in 7-1-1-7.

Pahekarubhe 1: PR1 – 131098-7.5
131098: The definition of the Intent, and the Third Pole, allows the unblocking of the DNA binary system. The nature of the binary exemplifies the operative modalities. The two parties involved confront the Graha related with the lack of clarity in their Intentions.

The couple relationship can release the binary block only when Intents are defined and there is open acceptance to converge towards a common Intent, which is the emergence of the Third Pole. The latter represents the third helix of the DNA. Its definition determines the shift from binary to trinity system.

The Third Pole, or Intent, is defined only when it is acknowledged by both binary parties. This means that the Intent requires a tangible form in ways that can be understood by both parties. The Intent has to be a living entity with a legitimate presence at the same level of the other two parties.

This search preserves the block and is subject to the manipulation of the forces of light and darkness. The polarities of binary relationships are constantly deprived of their 10 additional elements. The most decisive element is the Third Pole, or third helix, or Intent.

In the binary system the Third Pole is deprived by the predatory forces of light and darkness. These forces manage the activity of the couple. The dynamics of the couple are directed by such forces, and their nature changes according to which force prevails.

The definition of the Intent unmasks the cover-up of the predatory forces and reduces the palatability of the couple. The predatory forces feed on the 10 elements, which are not operative in human beings. Whenever human beings manage to release the binary block and expand in the third helix, the nutritional value of their relationship shifts from 10 to 9, and has therefore a lower value in the predatory marketplace.

In such marketplace the binary relationship holds the highest value and constitutes the most popular diet for Grahic forces. Once the binary block is released there is a shift allowing the access to another marketplace involving more refined predatory forces.

In the context of the binary 7.5, the release process involves the acknowledgment of the Intent of both polarities and in the verification of the will to proceed towards the emergence of the Third Pole. If this will exists, the conditions for the release become operative. If this is not the case it is necessary to proceed individually to the definition of the Intent so as to draw polarities available to unblock the binary system.

Guidance on 7.5
IP-071096-7.5:
071096: The Sacred Cone is like a vortex energy lifting Graha towards the Higher and allowing blessings to descend into the Lower. The task in sector 5 is to allow the Sacred Cone to shine, openly exposing it in all situations. Keep the Sacred Cone operative and the Sacred Cone Circle, which are the same. Allow the passage of the three Levels. Remember the vortex activated by the movement of the Sun. There your power abides. It is the energy coming from above that allows you to forgive and face the Graha. Here it is not about looking for Graha. The work involves keeping the constant connection with Handor, the Light, the Sun and in its expansion everywhere. Only the connection with the Light allows forgiveness. Keep the connection with Handor. Do not be deceived by Graha. Radiate your Light. Do not look for Graha. They will come smply to remind you to keep the connection with Handor. In sector 5 you begin wih the total awareness of being light: it is a fact. In sector 5 you radiate and illuminate with no discrimination. Do not be receptive to Graha. Be active and radiate Light. Do not enter into Graha. Radiate Graha with generosity and acknowledge that darkness does not exist. Support the Sacred Cone with Light. Use the clockwise rotation to send Light and allow Graha to spontaneously ascend anticlockwise. Do not stimulate Graha. Allow only Light to operate. Use this method  for it belongs to you.