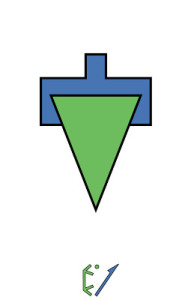 In the Astroshamanic Binary System, Sun in Libra (7) and Moon in Sagittarius (9) constitute Binary 7.9, or Binary number 81.

7.9: This is a mix of cardinal Air and mutable Fire. This pattern blends Libra’s balance, gentleness, harmony and diplomacy with Sagittarius’s sense of direction, expansion, enthusiasm, freedom and search for truth.

Those who resonate with this combination are romantic crusaders and seekers. When the target is a relationship, all goes well until the target is a target. The 7.9 breed is fond of moving about, being adventurous and facing challenges. In this respect 7.9 is prepared to track the most perilous and stretched itineraries in order to meet one’s beloved. Yet, what is frequently revealed once the target is hit, is that they are more in love with the quest for the beloved rather than the beloved him-herself.

This gives them a natural talent for piercing the mechanics of ordinary relationships, genuinely aligning their search to the subsequent Core Multidimensional Identity (CMI).

As fellow travellers on the quest they make excellent partners, provided that the quest itself is the authentic target and not the fellow traveller. Their hearts are expansive, generous and unbiased, holding the luminous vision of an inexorable happy ending, which may totally defy ordinary understanding.

Outgoing, passionate, and fundamentally loyal, 7.9 cherishes an inborn reverence for universal love, which may be disheartened by a narrow focus on a one-to-one relationship. 7.9 is perennially on the move, possessed by a romance with life itself and in constant intercourse with truth.

With 7.9 the Moon is 30° to 60° from the Sun, with exact Crescent Moon occurring when the Sun and the Moon are 45° apart. The first details of the potential of the New Moon in Libra begin to emerge. It is a receptive phase, aimed at gathering information and getting ready to take action along with the Intent established or perceived during New Moon. If your Intent had a multidimensional flavour, this is the moment when it comes to terms with ordinary reality. The question here is:

“How can I translate my Intent into a strategy that integrates both my multidimensional self and ordinary reality?”

Other more specific 7.9 questions may be: “What relationships allow me to openly support this Intent and expand its horizon? What is the true target of my relationships? How can I practically express enthusiasm, energy, good spirit and creative force in my relationship with others and the environment?”

On the release front, the question is “In which way can I release and heal the grievances in the relationships that appear to block my expansion and search for truth?” In this crescent phase of the Moon there is a major impulse for grounding and third-dimensional action. This is a time of digestion, assessment and wider perspective in the field of relationships and all themes related with Sector 7.

Qualities: Outgoing, passionate, dynamic and loyal, basic optimism, capacity to see the wider vision, making it known, promote it and receiving the related support, reverence for universal love, in romance with life itself and constant intercourse with truth.

Grievances: Excessive enthusiasm, restlessness, exaggerations, gullibility, naivety, tendency to be carried away by one’s excitement and missing the deeper motivations.

Astroshamanic Seal: a triangle pointing downward towards the solar plexus and held upward by a structure. The seal strengthens the relationship with the Spirit Guide and is associated with the following vision:

In the sky I see a gap among the clouds of Sector 9. That gap is open for the vision. I connect with Pahai Sadoh (the Guide of the Middle World), my primary multidimensional connection. Then I hold the hand of the Higher World and Lower World Guide, representing whatever exists outside, so as to say. Pahai Sadoh is the maximum expression of the inner world, it is a synonymous of the Christ meant as the unifying self. You can hold the hands of others and be united with them, yet when you detach from them the unity which is left is always related with Pahai Sadoh, who includes everything. You can access others only through Pahai Sadoh, your primary relationship. There is no true connection unless Pahai Sadoh is involved. We access Sector 7 in Quiumakai, moving on a wide hill from where a complete sight of the horizon is available. This gives a sense of ecstatic expansion.
I take the binary potion and receive the following vision: I see a big cone whose lower apex resides in the solar plexus (in that point it touches a sort of quartz), while the upper base of the cone connect with the armpits. It is the abode of Pahai Sadoh and it is to be kept clean and active. The glyph describes the position of the cone. (260998)

“Never be disturbed by time and remember to sing your songs”

Alain-Fournier, 7.9.12 (October 3, 1886 – September 22, 1914) French novelist
Lester Dent, 7.9 (October 12, 1904 – March 11, 1959) American writer pulp fiction author, best known as the creator and main author of the series of novels about the superhuman scientist and adventurer, Doc Savage. The 159 novels written over 16 years were credited to the house name Kenneth Robeson.
Virgil, 7.9 (15 October 70 BC – d. 19 BC) Roman poet. Ma un dio penetra in ogni cosa, nelle terre e negli spazi di mare e nel cielo profondo. (IV, 221-2) Deum namque ire per omnia, terrasque tractusque maris caelumque profundum.
James Tissot, 7.9.7 (15 October 1836 – d. 1902) French artist
Mario Puzo, 7.9 (15 Octobeer 1920 – d. 1999) American novelist “Keep your friends close, but your enemies closer.” “What is past is past. never go back. Not for excuses. Not for justification, not for happiness. You are what you are, the world is what it is.” “Italians have a little joke, that the world is so hard a man must have two fathers to look after him, and that’s why they have godfathers.” “I’ll tell you the only real truth. Cunt is where it all begins and where it all ends. Cunt is the only thing worth living for. Everything else is a fake, a fraud and just shit.”
Robert Rauschenberg, 7.9 (October 22, 1925 – May 12, 2008) American painter and graphic artist  well-known for his “Combines” of the 1950s, in which non-traditional materials and objects were employed in innovative combinations.

Friedrich Nietzsche, 7.9.8 (October 15, 1844 – August 25, 1900) prominent and infamous German philosopher, one of the most influential public iconoclasts of ordinary reality. Nietzsche sustained that the aim of human existence is about establishing the connection with the Übermensch (overman, or superman), whose task is unveiling what lies behind the ordinary reality. The Übermensch is able to move into the deepest passions, yet with the capacity of directing them towards authentic values, which are those that come out of his direct experience and not the consensus reality or mass conformity. Nietzsche maintained that all humans are triggered by the will to power. This is not the power over others, it is the capacity to exercise power over oneself, the power required to manifest one’s genuine creativity.
There is always some madness in love. But there is also always some reason in madness.
Here the ways of men part: if you wish to strive for peace of soul and pleasure, then believe; if you wish to be a devotee of truth, then inquire.
You need chaos in your soul to give birth to a dancing star.
That the value of the world lies in our interpretation (that other interpretations than merely human ones are perhaps somewhere possible); That previous interpretations have been perspective valuations by virtue of which we can survive in life, i.e., in the will to power, for the growth of power; that every elevation of man brings with it the overcoming of narrower interpretations; that every strengthening and increase of power opens up new perspectives and means believing in new horizons this idea permeates my writings. The world with which we are concerned is false, i.e., is not a fact but a fable and approximation on the basis of a meager sum of observations; it is “in flux,” as something in a state of becoming, as a falsehood always changing but never getting near the truth: for there is no “truth.”
My formula for greatness in a human being is amor fati: that one wants nothing to be different, not forward, not backward, not in all eternity. Not merely bear what is necessary, still less conceal it—all idealism is mendaciousness in the face of what is necessary—but love it.
Against an enemy. How good bad music and bad reasons sound when one marches against an enemy!
You look up because you want to be exalted. And I look down, because I am exalted.
Whoever fights monsters should see to it that in the process he does not become a monster. And when you look long into an abyss, the abyss also looks into you.
Love is not consolation.  It is light.
It is not a lack of love, but a lack of friendship that makes unhappy marriages.
You have your way. I have my way. As for the right way, the correct way, and the only way, it does not exist.
And those who were seen dancing were thought to be insane by those who could not hear the music.
In heaven, all the interesting people are missing.

Claude Vorilhon, 7.9 (September 30, 1946 in Vichy, Allier, France) founder and leader of the UFO religion known as Raëlism. Vorilhon began singing at a young age and soon became a sports-car journalist and test driver for his own car-racing magazine, Auto Pop. Following what he said was an extraterrestrial encounter in December 1973, he formed the Raëlian Movement and changed his name to Raël (allegedly meaning “messenger of the elohim”). He later published several books, which detail his claims of an encounter with a being called Yahweh in 1973.

Bruce Lipton (7.9.5, Pluto cjn Asc) born October 21, 1944 at Mount Kisco, New York, American developmental biologist best known for promoting the idea that genes and DNA can be manipulated by a person’s beliefs. He is the author of the bestselling book, The Biology of Belief, and is a former researcher at Stanford University’s School of Medicine.

Perperikon: the largest megalithic site in the Balkans in the ancient Thracian city of Perperikon (Перперикон) located in the Eastern Rhodopes, 15 km northeast of the present-day town of Kardzhali, Bulgaria, on a 470 m high rocky hill, with the village of Gorna Krepost (“Upper Fortress”) located at the foot of the hill by the Perpereshka River. The peak, where the Sacred Cone Point abides, was called the “rock home of the Sun God” and is thought to be the location of the Temple of Dionysius.