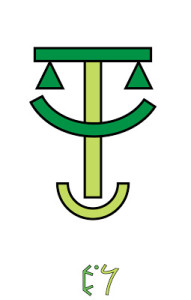 In the Astroshamanic Binary System, Sun in Libra (7) and Moon in Virgo (6) constitute Binary 7.6, or Binary number 78.

7.6 is a mix of cardinal Air and mutable Earth. This pattern blends Libra’s balance, grace and diplomacy with Virgo’s discrimination, intelligence and practical sense. Helpful, tactful, refined and exquisite, these folks are devoted to their practical values and those who resonate with them. Their relationships may involve hard work, yet if they can accept it and find motivation, this can bring a lot of joy.

Sun in Libra and Moon in Virgo hold a semi-sextile (30°) aspect, connecting two consecutive signs, which are completely different energies, yet closely linked as part of a wider process. The signs involved can operate productively as long as they keep their integrity. The first sign, in this case Virgo, sets the process in motion, and the second (Libra) follows. Problem may arise when the opposite occurs. The Moon in Virgo needs order and work commitments, while the Sun in Libra is more inclined to an easy and harmonious attitude to life, which the Virgo side may perceive as lazy.

When the waning Moon is in Virgo at 30° from the Sun in Libra, this is the final part of the phase of Balsamic Moon, or Waning Crescent Moon, the completion of the lunation cycle leading to the New Moon. It is a  crucial time of release and healing, leaving space for whatever need to be ultimately completed or let go of before moving on to another lunation. The main focus in this phase is a work of release and surrender. At this stage it is possible to feel confused, overwhelmed and face crisis. It is a process of major fermentation, in which it is vital to hold a sense of purpose, while also accepting uncertainty and nebulosity as part of the process. The question here is: “What do I release? What do I take in the next cycle?”

Astroshamanic Seal: this binary seal celebrates the discriminate release of relationships, operated with sense of justice and acceptance of the fragile uncertainty that can follow. “You tested yourself, realising that your fire has to make the choice, the fire of the trunk which is now tuned on by Pahai Sadoh, and is directed towards the intent, which is currently undergoing transformation.”
In Quiumakai the Sun is setting on the horizon surrounded by clouds and with a solitary bird flying followed by a companion. They go to the place where birds start to die. They carry eggs which will bring new life. They are going to the place where couples select what is to be kept and what is to be released. “In the process of evaluation of the couple you need to focus on what is luminous and publicly declare what you are releasing. Declare what you want and consider right” Community relationships, no privileged relationships. Each one relates and provides their contribution to the circle. “Manipulation, plots, guilt and hard work to please others is released. A spiral rotating anticlockwise. A being emerges with the palms of its hands directed above. A sword appears in its hands. It is used to cut the umbilical cord. I see the black cord and the light cord from which I receive nourishment. I will cut the black cord, which bring fear and resentment. I am invited to hit rising the sword. This cut or killing pertains to Justice and is different from the killing in Sector 1… Upon cutting the black cord, it starts sending out black substance and getting mad. The cord of light becomes bigger. “Be ready to let go of your partner completely. This is not there anymore. It went away because you cut the cord. The black cord will always be there and you can return there whenever you want. If you choose to give it attention, it is there. You cut the cord and now accept what will happen. Focus on the cord of light. Do not be distracted by the black cord. If you decide to see it, this is your choice. Allow the undoing of the black cord.”

Frank Herbert, 7.6.7 (October 8, 1920 – February 11, 1986) critically acclaimed and commercially successful American science fiction author, best known for his novels, most notably Dune and its five sequels. The Dune saga, the “best-selling science fiction novel of all time, is set in the distant future and taking place over millennia, deals with themes such as human survival and evolution, ecology, and the intersection of religion, politics and power. He used his science fiction novels to explore complex ideas involving philosophy, religion, psychology, politics and ecology, which have caused many of his readers to take an interest in these areas. The underlying thrust of his work was a fascination with the question of human survival and evolution. Such was the devotion of some of his readers that Herbert was at times asked if he was founding a cult, something he was very much against. Much of Herbert’s work makes difficult reading. His ideas were genuinely developed concepts, not merely decorative notions, but they were sometimes embodied in excessively complicated plots and articulated in prose which did not always match the level of thinking.

Deepak Chopra, 7.6.12 (October 22, 1946) Indian-American physician and writer, public speaker on subjects such as spirituality, Ayurveda and mind-body medicine. Chopra began his career as an endocrinologist and later shifted his focus to alternative medicine. Chopra now runs his own medical center, with a focus on mind-body connections. Chopra was a top assistant to Maharishi Mahesh Yogi before launching his own career in the late 1980s by publishing self-help books on New Age spirituality and alternative medicine. “Holding on to anything is like holding on to your breath. You will suffocate. The only way to get anything in the physical universe is by letting go of it. Let go and it will be yours forever.” “Every time you are tempted to react in the same old way, ask if you want to be a prisoner of the past or a pioneer of the future.” “When you struggle with your partner, you are struggling with yourself. Every fault you see in them touches a denied weakness in yourself.” “Silence is the great teacher and to learn its lessons you must pay attention to it. There is no substitute for the creative inspiration, knowledge, and stability that come from knowing how to contact your core of inner silence.” “There is no holy life. There is no war between good and evil. There is no sin and no redemption. None of these things matter to the real you. But they all matter hugely to the false you, the one who believes in the separate self. You have tried to take your separate self, with all its loneliness and anxiety and pride, to the door of enlightenment. But it will never go through, because it is a ghost.”

Stuart Wilde, 7.6 (September 24, 1946) British writer. Best known for his works on metaphysics, self-empowerment, and spirituality, also a lecturer, teacher, essayist, humorist, scriptwriter, lyricist, and music producer. He is the author of twenty books including the popular series The Taos Quintet: Miracles, The Force, Affirmations, The Quickening, and The Trick to Money is Having Some. Neptune Power. “The real you, the inner you, is pure, very pure. It’s loving and it’s magnanimous. It understands. It has patience. It is tolerant-it will wait forever while your ego trots all over everywhere trying to figure life out. It is pleasing to remember that back home there is a friend who’s waiting for you to stop being silly, who’s waiting to welcome you with open arms if and when you show up.” “Everything is out there waiting for you. All you have to do is walk up and declare yourself in. No need for permission. You just need courage to say, ‘Include me’. Providing you have the energy to pull it off you can do what you like. And the Universal Law, being impartial, will be only too delighted to deliver.”

Handorian Reference:
Grand State of Tanmarg, Nation of Galvezians
7.6 – Galvezians. This is one of the smallest nation of the Handorian States System, located in a rather dull flatland environment bordering the Greno river. Some trinities merely comprise a dozen of buildings, with their lowest subidivisions being pentas.