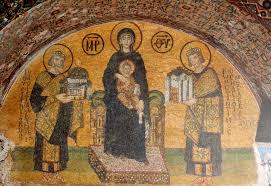 On September 8 the Roman Catholic and Eastern Orthodox churches celebrate the Nativity of the Blessed Virgin Mary. This event is coherently celebrated when the Sun is in Virgo and nine months after the Virgin’s Immaculate Conception on 8 December.

This is also the date when Gnostics commemorate the Descent of Sophia, the Divine Feminine or Wise Goddess. Sophia, the Greek translation of the Hebrew Chokmah, denoting Wisdom, was a real biblical character with abundant references in the Christian scriptures. One reason her name is not prominent in the Bible is that it is usually translated with the term “Wisdom”.

Her gender was feminine in Hebrew and Greek until it became assimilated to the masculine concept of Logos, and then to the Latin Spiritus Sanctus (Holy Spirit).

The Descent of Sophia and her feelings of fear, alienation and suffering depicts the existential condition of the human soul in the world and provides a further narration common to most shamanic cosmologies. There are many versions of the myth of this Descent or Fall, which is also a main feature in the cosmology of most conventional religions.

The major difference between these latter traditions and the myth of Sophia is that the Fall, far from occurring after creation, was actually its very cause.

In the Gnostic scriptures Sophia is described as the youngest of the emanated divinities, the last of the Aeons, dwelling in the realm of unity and Fullness (pleroma). As a result, she could not access the original Light, the primal source.

“Sophia had seen a light in the distance that she though might be the Father, but it was only that Light reflected in the depth of the Abyss. Seeking the Light, she journeys farther and farther into the deceptive depths, until she is at last stopped by a power known as the Limit (Horos). At this point a strange division occurs within Sophia’s nature. Her higher self, her essential core, becomes enlightened and mystically ascends back to the Fullness, while her lower self remain in alienation.”[1]

Sophia, like human beings, incorporates two aspects: the first (Higher Sophia) is part of the realm of unity and fully aware of the connection with the centre, the second (Lower Sophia) dwells in the circumference and identifies with a body separated from the centre (the ego). The Lower Sophia (Achamoth) expresses energies that generate the realm of separation, manifesting a being who becomes the creator of the material and psychic cosmos.

“And…Sophia (Wisdom)…being an Aeon, conceived a Thought from herself with the reflection of the invisible Spirit [the Absolute] and Foreknowledge [one of the higher Aeons, or possibly here referring to the Power of the Absolute; i.e. “Shakti”].  She wanted to bring forth a likeness out of herself without the consent of the [Absolute] Spirit…and without her consort….And because of the invincible power  which is in her, her thought did not remain idle and a thing came out of her which was imperfect and different from her appearance, because she had created it without her consort…”[2]

This being, called the Demiurge, has lost consciousness of the Father, and believes himself to be the absolute God. As a result, he begins to unfold his own kingdom (kenoma), the realm of separation, which is an imperfect manifestation of the pleroma. This bogus cosmos consists of seven spheres, each of which is also a planet and angel, presided by seven rulers (archontes), with the Lower Sophia or Achamoth remaining entrenched in the eighth sphere. In response to her agony, the Father creates a new pair for her redemption: Christ and the Holy Spirit.

This myth identifies Jesus as the rescuer of the Lower Sophia, her sister-lover. In the Christian literature the Virgin Mary and Mary Magdalene are often associated with the Higher and Lower Sophia respectively. The Cross represents the boundary between the pleroma and kenoma. The Christ takes Achamoth into the pleroma, while the Holy Spirit remains to retrieve the remaining fragmented parts still trapped in the kenoma.

“We can not go to that perfect home until we find and bring back those sparks of light, our own human souls, which are trapped in the world. We must recover that pearl of consciousness that Sophia sowed in us in the beginning, for only through human consciousness can the redemption of all creation occur. We, the children of Sophia, are the mediators between heaven and earth. The bodiless powers are really quite helpless in this world without our hands, and we are quite helpless to bring the redeeming light-power that can awaken the slumbering sparks without their divine aid and assistance. Even as the human soul cries out for redemption, so the soul of the world cries out for deliverance, a deliverance that can only occur when all human souls have been awakened and liberated.”[3] Step by step the process of retrieval proceeds, as “Sophia ascends toward the light of the Fullness, traversing the twelve regions that she had transgressed – in the literal sense of passed through – on her way down into chaos. To undo these transgressions, she utters twelve repentances, or poetic statements, which allow her to rise through the twelve gates, as they are sometimes called. She cries out to the twelve powers in elaborate ritual supplication addressed to the ultimate Divinity, here always called Light.”[4]

After calling out repeatedly to the Light, the dark powers finally dissipate and she enters again in the kingdom of the boundless Light.