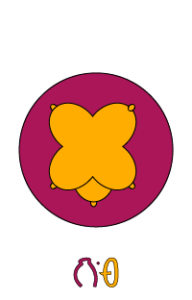 12.4 (Sun in Pisces and Moon in Cancer) blends Mutable Water with Cardinal Water, mixing Pisces’s imagination, compassion and sensitivity with Cancer’s tender and nourishing qualities. This is an intense binary, endowed with emotional tenacity, capacity to adhere to, and nourish, one’s visions. They have a way to relate 4th dimensionally with people, which allows them to win their confidence and also to anticipate responses or actions before they are verbalized.

Pisces and Cancer are in a trine (120°) aspect. which produces an easy, balanced and mutually supporting link between the signs involved. This can bring major benefits when there is clarity of intent and focus. If this is not the case the benefits will develop unconsciously and gained by whoever holds a clear intention.

When the Sun and Moon move into a trine aspect (120°), if we have thoroughly played our part, the cycle is ripe to provide blessings and rewards. This phase support sharing resources and gifts regarding what was generated with the New Moon.

Luc Besson, born 18 March 1959, Sun in Pisces, Moon in Cancer, Ascendant in Leo, French director and writer  (Paris, March 18, 1959) Subway, The Fifth Element, Angel-A.
– Look into the mirror. What do you see?
– I see… an exceptional girl.
– Thank you. Next to her, what do you see?
– … I don’t know.
– You’re progressing.
– You think so?
– Of course, before you saw only s**t. Now, at least, you see nothing. You’ve cleaned up well. Now, you need to fill up the empty shell. You can’t leave it empty. Look hard, in front of you. Anything catch your eye in this handsome face?
– Not much.
– Look into your eyes. What do you see?
– … Kindness
– Yes, lots of it. What else?
– … They’re not bad-looking.
– Beauty, exactly. They’re beautiful. What else?
– … Maybe… A little gentleness?
– Yes lots. And love?
– Sure, lot of love. Too much, perhaps.
– If there’s too much, it has to come out. Say you love me.
– Pardon?
– You don’t love me?
– Yes, a lot… I mean… I feel a sort of affection, but it may be friendship…
– Do you love me or don’t you?
– From the very first day. The very first second.
– So say it.
– It’s hard to say.
– Do you know why? Because no one ever said it to you. Am I right? It’s hard to love yourself when no one reflects that… I love you André… See, you have received love. Now, you can give some in turn. Go on.
– I love you Angel-A, or whatever your name is.
– You are right. say it again without my name.
– I love you.
– That’s good. Now, look yourself in the eye, and say it.
– … I can’t
– Of course, you can. Look at your body, battered by the lack of love and trust. Don’t you see it deserves a little care? Don’t reject your wounded body. It has suffered in silence all this time. Tell your body how important it is, that it has its place. Give it what it deserves. – … … I love you André, I love you.
(from the movie “Angel-A” by Luc Besson, born 18 March 1959, Sun in Pisces, Moon in Cancer, Ascendant in Leo, French director and writer) See scene at: https://www.youtube.com/watch?v=HRrFvapV4ms

Vita Sackville-West, born on 9 March 1892, English poet, Sun in Pisces, Moon in Cancer, Ascendant in Capricorn I have come to the conclusion, after many years of sometimes sad experience, that you cannot come to any conclusion at all.
All craftsmen share a knowledge. They have held
Reality down fluttering to a bench.
“Days I enjoy are days when nothing happens,
When I have no engagements written on my block,
When no one comes to disturb my inward peace,
When no one comes to take me away from myself
And turn me into a patchwork, a jig-saw puzzle,
A broken mirror that once gave a whole reflection,
Being so contrived that it takes too long a time
To get myself back to myself when they have gone.”
If I had only loved your flesh
And careless damned your soul to Hell,
I might have laughed and loved afresh,
And loved as lightly and as well,
And little more to tell.

Flavius Valerius Aurelius Constantinus (27 February ca. 272 – 22 May 337), commonly known as Constantine I, Constantine the Great, or Saint Constantine (among Eastern Orthodox and Byzantine Catholic Christians), Roman Emperor from 306, and the undisputed holder of that office from 324 to his death. Best known for being the first Christian Roman Emperor.
Harald V (born 21 February 1937) king of Norway.
Osama bin Mohammed bin Awad bin Laden (12.4.3, Pluto cjn IC, Satrun cjn Desc) March 10, 1957 – May 2, 2011a) founder of the militant Islamist organization Al-Qaeda.
Linus Pauling (12.4.8) February 28, 1901 – August 19, 1994, American scientist, peace activist, author and educator. He is considered the most influential chemist of the 20th century and ranks among the most important scientists in history. Pauling was one of the first scientists to work in the fields of quantum chemistry, molecular biology and orthomolecular medicine (optimum nutrition).
Clara Petacci (Claretta Petacci) (12.4.2, Uranus cjn MC, Neptune cjn Moon) 28 February 1912 – 28 April 1945, upper class Roman who became Italian dictator Benito Mussolini’s mistress.
Romulus (12.4.12) c. 771 BC—c. 717 BC and Remus (c. 771 BC—c. 753 BC, the traditional founders of Rome, appearing in Roman mythology as the twin sons of the priestess Rhea Silvia, fathered by the god of war, Mars. According to the tradition recorded as history by Plutarch and Livy, Romulus served as the first King of Rome.
Mayer Amschel Rothschild (12.4.6, Neptune cjn Moon) 23 February 1744 – 19 September 1812, founder of the Rothschild family international banking dynasty that became one of the most successful business families in history.
Amasa Stanford (12.4.8) March 9, 1824 – June 21, 1893, American tycoon, industrialist, politician and founder of Stanford University.

Jean Calas (Neptune cjn Sun, 1698 – 1762) merchant living in Toulouse, France, famous for having been the victim of a biased trial due to his being a Protestant. In France, he is a symbol of Christian religious intolerance, along with Jean-François de la Barre and Pierre-Paul Sirven.

Joel Osteen (born March 5, 1963) American best-selling author and the senior pastor of Lakewood Church in Houston, Texas. His Christian ministry reaches over seven million broadcast media viewers weekly in the United States and millions more in over 100 nations around the world.

In the beach of Quiumakai there is a large breast, which becomes larger and larger. I find myself in the midst of this breast, which fragments in millions of breasts, flowing like waves. I receive the potion and then surrender to the ecstasy of all these breasts. They caress me and move along my body. The ecstasy reaches a peak. I direct my attention towards the Intent. “This is the maximum force you can evoke. When you receive the power of the breasts, you own the maximum force. At that stage you need to remember the Intent connected with the Function. Stay with your Guide then for this is the maximum force, the moment you fulfil your task. When you receive these frequencies in obsessive ways, celebrate, for this is a sign of power. Connect joyfully with the Intent. Remember Ramakrishna, Quote him. This mammal energy is a talent of yours. Use it, otherwise it will haunt you to remind you of your strength. Employ it regularly.