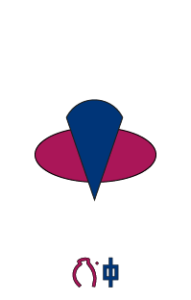 12.10 (Sun in Pisces and Moon in Capricorn) integrates mutable Water and cardinal Earth, blending Pisces’s empathy, surrender and imagination with Capricorn’s integrity, ambition and discipline. This combination produces folks capable of responsibly grounding the subtle vibrations coming from the imaginary and multidimensional realms, giving them practical form through competent pragmatic works. Ambitious, determined, sensitive, helpful and intuitive, they perceive the wider picture of the web of life and, far from being confused, they direct their energy with focus, pragmatism and discipline.

Sun in Pisces and Moon in Capricorn are in a sextile (60°) aspect, which involves two complementary signs, sharing the same polarity, yet not the same element. The binary can work harmoniously and offer significant opportunities as long as there is awareness and clarity of intention on both sides.

When the waning Moon is in Capricorn at 60° from the Sun in Pisces, the phase of Balsamic Moon, or Waning Crescent Moon, starts. It is a crucial receptive phase, a time of healing and rest, yet also of intense preparation and completion. Here you prepare for a new cycle, the next New Moon, and let go of the residues of the old. What is mainly needed in this phase is a work of release and forgiveness. It is easy at this stage to feel restless, excited or willing to change everything and start doing something totally new and unpredictable Yet, until you learn to release the grievances recycled from the past, you will never truly create anything new. The question here is: “What do I release? What do I take in the next cycle?”

Astroshamanic Seal: this is the seal of the ocean of discipline, the primeval waters, the capacity to manifest through the vivid use of imagination, as long as imagination is impeccably disciplined. This process may bring about overwhelming, destructive and chaotic developments when emotional turmoil takes over. Here you are confronted with the need to take responsibility, commit and become pragmatically operative in order to manifest results.

Calpernia Addams (12.10.5, Saturn cjn MC) born February 20, 1971 in Nashville, Tennessee, American author, actress and musician, internationally recognized for her efforts as a spokesperson and activist for transgender rights and issues.
Nicolas Bouvier (March 6, 1929 – February 17, 1998) Swiss traveller and writer, iconographer and photographer.
Georg Cantor (3 March 1845 – January 6, 1918) German mathematician, born in Russia, the creator of set theory. Cantor’s theorem implies the existence of an “infinity of infinities”. Some Christian theologians saw his work as a challenge to the uniqueness of the absolute infinity in the nature of God, on one occasion equating his theory of transfinite numbers with pantheism.
Jean-Pierre Claris de Florian (Uranus cjn Sun) March 6, 1755 château of Florian, near Sauve – September 13, 1794, French poet and romance writer.
Guillaume du Vair (12.10) French writer (Paris, 7 March 1556 – Tonneins, 3 August 1621)
Bret Easton Ellis (12.10.5) born March 7, 1964 in Pomona, California, American author, considered to be one of the major Generation X authors.
James Ellroy (born Lee Earle Ellroy on March 4, 1948 in Los Angeles, California) American writer.
Suitbert Ertel (12.10.1, Uranus cjn Asc) born March 2, 1932 in Radevormwald, German psychologist, educator, author and astrologer.
William Falconer (12.10.7, Pluto cjn Asc) Edinburgh, UK, February 21 1732–1769,  Scottish poet.
Wilhelm Grimm (24 February 1786 – 16 December 1859) German author, the younger of the Brothers Grimm.
Pierre Hadot, born 21 February 1922, Sun in Pisces, Moon in Capricorn.
Only he who is capable of a genuine encounter with the other is capable of an authentic encounter with himself, and the converse is equally true…From this perspective, every spiritual exercise is a dialogue, insofar as it is an exercise of authentic presence, to oneself and to others.
Sonya Hartnett, Australian writer, 1968, (12.10). “Life is lived on the inside. What’s outside doesn’t matter.” “You’re not supposed to have iron bars around you – no one is supposed to have that. You’re supposed to fall down hills and get lonely, and find your own food and get wet when it rains. That’s what happens when you’re alive.”
Alessandro Manzoni (12.10) Sun Pisces, Moon Capricorn, Italian writer   (Milan, 7 March 1785 – 22 May 1873)

Anaïs Nin: born on 21 February 1903, with Sun in Pisces, Moon in Capricorn and Libra Ascendant, died 14 January 1977. Anaïs Nin is considered as the first writer of female erotica. As it is typical with Pisces plus Capricorn oriented folks, her books were and still are major bestsellers. In her alluring diaries she wrote about her incestuous relationship with her father, her passionate love affair and friendship with Miller and his wife, June, and her connections with artists and intellectuals. What follows is an excerpt from her diaries, describing female orgasm:
The entire mystery of pleasure in a woman’s body lies in the intensity of the pulsation just before the orgasm. Sometimes it is slow, one-two-three, three palpitations which then project a fiery and icy liqueur through the body. If the palpitation is feeble, muted, the pleasure is like a gentler wave. The pocket seed of ecstasy bursts with more or less energy, when it is richest it touches every portion of the body, vibrating through every nerve and cell. If the palpitation is intense, the rhythm and beat of it is slower and the pleasure more lasting. Electric flesh-arrows, a second wave of pleasure falls over the first, a third which touches every nerve end, and now the third like an electric current traversing the body. A rainbow of color strikes the eyelids. A foam of music falls over the ears. It is the gong of the orgasm. There are times when a woman feels her body but lightly played on. Others when it reaches such a climax it seems it can never surpass. So many climaxes. Some caused by tenderness, some by desire, some by a word or an image seen during the day. There are times when the day itself demands a climax, days of which do not end in a climax, when the body is asleep or dreaming other dreams. There are days when the climax is not pleasure but pain, jealousy, terror, anxiety. And there are days when the climax takes place in creation, a white climax. Revolution is another climax. Sainthood another.
I will not be just a tourist in the world of images, just watching images passing by which I cannot live in, make love to, possess as permanent sources of joy and ecstasy.
It takes courage to push yourself to places that you have never been before… to test your limits… to break through barriers. And the day came when the risk it took to remain tight inside the bud was more painful than the risk it took to blossom.
Our life is composed greatly from dreams, from the unconscious, and they must be brought into connection with action. They must be woven together.
There are many ways to be free. One of them is to transcend reality by imagination, as I try to do.
We don’t see things as they are, we see things as we are.

Karl H. Pribram (12.10.7, Pluto cjn MC, Uranus cjn Sun) born February 25, 1919 in Vienna, Austria, professor at Georgetown University and George Mason University, emeritus professor of psychology and psychiatry at Stanford University and Radford University. He did pioneering work on the definition of the limbic system, the relationship of the frontal cortex to the limbic system, the sensory-specific “association” cortex of the parietal and temporal lobes, and the classical motor cortex of the human brain.

Julia Cameron (12.10) born March 4, 1948 in Illinois, American teacher, author, artist, poet, playwright, novelist, filmmaker, composer, and journalist, most famous for her book The Artist’s Way (1992). She also has written many other non-fiction works, short stories, and essays, as well as novels, plays, musicals, and screenplays.

Esther Hicks (12.10) born March 5, 1948, American inspirational speaker and author. She has co-written nine books with her husband Jerry Hicks, presented numerous workshops on the law of attraction with Abraham Hicks Publications and appeared in the original version of the 2006 film The Secret. The Hicks’ books, including the series The Law of Attraction, are — according to Esther Hicks — “translated from a group of non-physical entities called Abraham.” Hicks describes what she is doing as tapping into “infinite intelligence”.

Niki Lauda (12.10.3) Austrian formula one driver.
Percival Lowell (12.10.1, Pluto cjn Asc, Netpune cjn Sun) March 13, 1855–November 12, 1916, businessman, author, mathematician, and astronomer who fueled speculation that there were canals on Mars, founded the Lowell Observatory in Flagstaff, Arizona, and formed the beginning of the effort that led to the discovery of Pluto 14 years after his death. The choice of the name Pluto and its symbol were partly influenced by his initials PL.
Henri Duveyrier (12.10.12) Sun in Pisces, Moon in Capricorn, Ascendant in Pisces, born February 28, 1840 in Paris, French explorer of the Sahara.
Thomas G. Morton (12.10.6, Uranus cjn MC) born on March 16, 1947 in Conservatoria, Brazilian psychokinetic and parapsychologist.
Adolf Stieler (12.10) German cartographer
Deke Slayton (12.10) Sun in Pisces, Moon in Capricorn, born March 1, 1924 in Sparta Wisconsin, American World War II pilot and later, one of the original NASA Mercury Seven astronauts.
Ann Wigmore (1909-1994) holistic health practitioner, nutritionist, whole foods advocate, and a doctor of Divinity, early pioneer in the use of wheatgrass juice and living foods for detoxifying and healing the body, mind, and spirit.