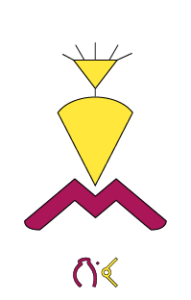 12.5 (Sun in Pisces and Moon in Leo) integrates Mutable Water and Pisces’s emotional sensitivity, imagination and compassion with Fixed Fire and Leo’s warmth, generosity and stardom. Those who resonate with this combination are superb actors in the HAC drama and comedies of life, alternating majestic moments of grandeur, power, pride, devotion and intuitive insights with times of humility, moodiness, depression, dependence and fear of competition. They blend the receptivity, empathy and invisibility of the servant with the dramatic self-expression and noble vitality of a sovereign.

Vincent Gabriel Fourcade (12.5) Sun in Pisces, Moon in Leo, born February 27, 1934, French interior designer and the business and life partner of Robert Denning. “Outrageous luxury is what our clients want,” he once said.

Samael Aun Weor (12.5) (March 6, 1917 – December 24, 1977), born Víctor Manuel Gómez Rodríguez, Colombian citizen and later Mexican, author, lecturer and founder of the ‘Universal Christian Gnostic Movement’ with his teaching of ‘The Doctrine of Synthesis’ of all religion.

Jimmy Lee Swaggart (12.5.9, Pluto cjn Moon) born March 15, 1935 in Ferriday, Louisiana) Pentecostal preacher and pioneer of televangelism who reached the height of his popularity in the 1980s.

State of Muolliz
Nation of Makir
Island of Ztasur: Makanetnaie, or Etnaimakan, i.e. the place where we all come from and we will all return.

I am giving the first talk to an audience in Quiumakai. I arrive at the village and I can’t see anybody in the streets. At the bottom of the main road I see a large tent. All the village is gathered there. I didn’t expect to speak in front of such a large audience. They all have dark skin. I focus on my Intent: “Finding a definite and coherent way to operate in everyday reality aligned with my experiences in alternative realities.” I realise that it is my Intent that I primarily need to communicate to the people of Quiumakai. I look at them with more attention. I see very familiar faces. I am touched by the way they look at me. Basically anyone I have met in ordinary life is there, including those I have not met yet or that I have met in other worlds. Bhima sits at the end of the tent on a throne. It is the first time I see him dressed so solemnly. He wears a feathered hat and is surrounded by 12 Graha. I ask him if I can speak, and he gives his consent. I say: “The first thing I want to convey is that I don’t know exactly what I am supposed to do and say. Hence I am asking you”. Bhima replies: “The first thing to do is for you to be aware of the attention and love that you are receiving from us right now.” I then realise that I am the one everyone has gathered to listen to and I perceive all the related power. The people of Quiumakai are looking at me expecting some kind of request. Rather than them having to tell me what to do, it is as if they want to know what they can do for me. Encouraged by this clear impression I start: “Dear brothers and sisters, I ask you more clarity and order in the Middle World. I am aware of the connection with you and I give you permission to communicate with me and operate in the Middle World. I am determined to wipe away the perception of separation that prevails in the Middle World, giving space to your reality of union. I invite to intervene. I am ready to whatever, as long as it aligns with this Intent.” Bhima invites me to be aware of what I have just said, if I am truly available to whatever. “Reflect upon this” he says “for certain things could scare you.” I reply that I also ask for protection. “If you provide protection, I will be equipped to face the fears.”

I then call Taepeh Surahim Sadoh (12/05) and feel her power. I am reminded that I have been invited as an authority and that I need to talk about what happens in the Middle World. I say: “Conditions on earth, as I perceive them, shows that all human have a con vision with an ecstatic vision. At the same time there are strong interferences and separation dominates. We need tools to keep a stable connection. Most people I know are very sensitive to unity. I need a stronger medicine. Something I can use at all times.” I then pause for a while. Bhima says: “This medicine has been prepared for you. In order to use it you are asked to use the power of 12/5, which involves being a leader of the vision. You have come here as a leader. You need to be a leader to use this medicine. You need a lot of power. “Use the terms Kahesha Opa, Pahai, Sadoh and now also Quiumakai. Add this last word, it is very powerful. Now you can receive Quiumakai Pidrah: a black stone. You will soon find black stones that will be a confirmation of its power. You use them every time that you are aware of a decoy at work. Take this stone. It is ferocious. It operates similarly to Taiware, though it works in a very subtle way. Place the stone between you and the Graha, so that you only see Quiumakai Pidrah and also the Graha can only see the stone. When this medicine is activated the Graha confronts only the Pidrah and the Lower World. You are not supposed to interact with the Graha. Your task is to use the medicine and allow it to operate. We deal with the Graha and work with them in accordance with Kahesha Opa. By using Quiumakai Pidrah you avoid invasion from Graha. In this way they don’t affect your system and are used by us. You need to give permission to the medicine to operate. That’s your only concern. Do not interact with the Graha. Do not provide explanations and justifications. Disregard what the other is saying. Focus only on Pidrah. Do not expect others to be aware of what you do. It is your responsibility to do it, not theirs. Cheer up in this operation, for it is very likely that the person involved will also see the stone. She/hemay either change radically or disappear from your life. This is the risk. If you are ready to face it, then you can sue the medicine. You don’t need to do anything with the person involved. Whatever happens be detached and avoid any intervention…”

(270299): the Sun lies on the sea. The waters of the emotion focus on the intent. The potion provides the vision of a cone from which a most beautiful woman with abundant breasts emerges. She opens her hands and makes herself totally available.”