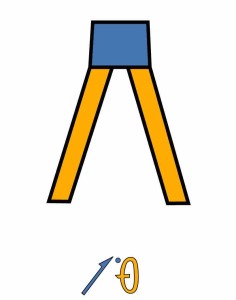 In the Astroshamanic Binary System, Sun in Sagittarius (9) and Moon in Cancer (4) constitute Binary 9.4, or Binary number 100.

9.4 (Sun in Sagittarius and Moon in Cancer) is a blend of mutable fire and cardinal water, integrating Sagittarius’s adventure, expansion, freedom and thirst for truth with Cancer’s sensitivity, compassion, protectiveness and tenacity. This combination produces romantic and adventurous beings, abundant with enthusiasm, optimism, idealism, talents, which they draw from their deep connection with their ancestors. They are driven by an overflowing enthusiasm and can easily tap into what truly triggers the motivation of the people and environment they come in contact with. Their goals may appear extreme and inflated, yet they do maintain a sense of caution and a productive respect for their tradition, which enable them to proceed with security and confidence.

Sagittarius and Cancer are in quincunx aspect, an angle of 150°, which is five-twelfths of the 360°. This aspect tend to cause slides into parallel universes affecting what happens in everyday reality. In this case the signs involved are  strikingly different as they express in ordinary reality, which allows them to function at their best in out of the ordinary contexts, such as shamanic work, multidimensional voyages, and also conspiracies, espionage, secret services, etc.

The phase of Full Moon begins two days before and ends two days after exact Full Moon or opposition (180°) of Moon to Sun, hence it also encompasses the quincunx (150°) when the Sun is in Sagittarius and the Moon in Cancer. This is the final stage of the Full Moon leading to the next phase, the Disseminating Moon. The Full Moon is an active and highly charged moment. It represents the apex of the lunar cycle. Its function is to bring balance. The aim of the final part of the Full Moon as it moves in Cancer is to allow this balance to take place by deep and uncompromising release of pent-up emotions,  which can more easily be liberated through working with past memories. It is essential at this stage to be aware that what is released is collective, ancestral energy, which can only be liberated if you let go of any personal identification.

“Few men realize that their life, the very essence of their character, their capabilities and their audacities, are only the expression of their belief in the safety of their surroundings.” (Joseph Conrad, Sun Sagittarius, Moon Cancer, Ascendant Gemini)

Astroshamanic Seal: the seal portrays two stairs, one ascending and the other descending, joined together. It is a vehicle of transits for dead and born souls. Celestial attendants take care of all souls. The seal celebrate the joy of travellers at all levels.

William Blake (9.4.4) (28 November 1757 – 12 August 1827), English poet, painter, and printmaker. Largely unrecognised during his lifetime, Blake is now considered a seminal figure in the history of both the poetry and visual arts of the Romantic Age. His prophetic poetry has been said to form “what is in proportion to its merits the least read body of poetry in the English language”. His visual artistry has led one contemporary art critic to proclaim him “far and away the greatest artist Britain has ever produced”. Although he lived in London his entire life except for three years spent in Felpham he produced a diverse and symbolically rich corpus, which embraced the imagination as “the body of God”, or “Human existence itself”.
Imagination is the real and eternal world of which this vegetable universe is but a faint shadow
It is not because angels are holier than men or devils that makes them angels, but because they do not expect holiness from one another, but from God only.

Joseph Conrad, (9.4.3) Polish-born British writer (3 December 1857-d. 1924)
“The belief in a supernatural source of evil is not necessary; men alone are quite capable of every wickedness.”
“Few men realize that their life, the very essence of their character, their capabilities and their audacities, are only the expression of their belief in the safety of their surroundings.”
“It’s extraordinary how we go through life with eyes half shut, with dull ears, with dormant thoughts. Perhaps it’s just as well; and it may be that it is this very dullness that makes life to the incalculable majority so supportable and so welcome.”
“His very existence was improbable, inexplicable, and altogether bewildering. He was an insoluble problem. It was inconceivable how he had existed, how he had succeeded in getting so far, how he had managed to remain — why he did not instantly disappear.”

Jacques Lacarrière (9.4) (2 December 1925 – 17 September 2005) French writer. He studied moral philosophy, classical literature and Hindu philosophy and literature. Author of Les Gnostiques (1973).
“And so in the Gnostic mythology, Christ, for example, was idealized as a being who “ate and drank but did not defecate. Such was the strength of his continence that foods did not corrupt in him, for him there was no corruption”
“Gnostic contemplation are set out: the world we live in was not created by the true God, it is the work of an impostor, and man’s task will consist in rejecting the swindle of this world, together with the Biblical and Christian teaching which claims to uphold it and all the institutions through which it is perpetuated. Thus, from the start, the Gnostic identifies himself as a marginal…‎‎”
“Life and involved in the world— the history of its alienation and recovery, its ‘way’ down and through the nether world and up again” (Jonas 50). Motivated by “the conviction that there exists in man something which escapes the curse of this world, a fire, a spark, a light . . . and that man’s task is to regain his lost homeland by wrenching himself free of the snares and illusions of the real, to rediscover the original unity, to find again the kingdom of this God who was unknown, or imperfectly…‎”

Bill Nelson (9.4) (born 18 December 1948, Wakefield, West Yorkshire, England)  English guitarist, songwriter, painter, musician. Interested in Gnosticism in the mid-1980s and his album Chance Encounters in the Garden of Lights includes songs with titles evocative of Gnostic concepts. The dedication of the album reads “I offer this work to my fellow initiates as a testament to the Gnosis and a confirmation of The World Within.”

Pahekarubhe 061298
The joy of the traveller. A large hi-tech vehicle accompanies the dead souls towards an advanced station. Celestial nurses take care of the souls. There are two stairs, one ascending and the other descending, all joined like a bridge.