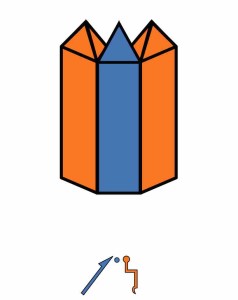 In the Astroshamanic Binary System, Sun in Sagittarius (9) and Moon in Gemini (3) constitute Binary 9.3, or Binary number 99.

9.3 confronts mutable fire with mutable air, triggering Sagittarius’s adventurous spirit, expansion and search for truth with Gemini’s eloquence, flexibility and dexterity. Natural gamblers, extroverts and risk-taker on the luckiest side, they sell themselves at their best and easily achieve popularity and prestige. Their vast range of interests and mental perspective allows them to gain access and influence in various realms. They are motivated by a blend of self-confidence, high ideals and down-to-earth HAC good sense.

This binary embraces the Full Moon in Gemini, a strategic magnification of  energy aimed at serving primary tasks in our life purpose. This energy may run quite profusely, demanding straight exposure and materialization. During a Full Moon in Gemini, we may confront the unswerving energetic implications of our Intent, which do not necessarily coincide with our conditioning and belief systems, or with whatever we do in order to fit with consensus reality. On the day before and after the Full Moon, it is important that we allow ourself focus, space and time to express highly-charged energy.

This gateway is strategically active especially on a Full Moon, when the Sun is in Sagittarius and the Moon in Gemini.

A Multidimensional Gateway is a setting through which multidimensional beings can pass in order to immediately access locations far away in time or space.

In previous times this gateway was the axis Capricorn-Cancer, which still formally is. Yet, due to the precession of the equinox, this point has shifted to Sagittarius-Gemini, with the Gate of Capricorn now being located between the constellations Sagittarius and Scorpio. This is acknowledged as the Galactic Centre, where scientists are aware of a mysterious black hole.

This is esoterically regarded as the portal to higher dimensions, i.e. the birth canal leading to the Lower World, rather than, as it is often advertised, to Heaven.

Sagittarius is considered as the stellar womb from which the current separated reality was conceived and born.

Hence, when the Sun transits Sagittarius there is potential for conceiving and giving birth to alternative configurations, especially to those with deep Scorpio issues.

If you wish to browse around and be further confused, there is now ample literature on the topic, yet you may risk missing the Sagittarius darting energy aiming herewith at a precise target.

And this target may be what your intention is, right now, what in this moment you choose to create and accept in your mind as the best possible dimension you can conceive for yourself and others, without any limit regarding what gives you joy, peace and any quality you value.

“True humility is not thinking less of yourself; it is thinking of yourself less.”  (C.S. Lewis, Sun in Sagittarius, Moon in Gemini)

Astroshamanic Seal: This seal portrays a triple crystal. Its gift is to support honourable and sacred communication.

Jonathan Swift (9.3.10) born in Dublin on 30 November 1667 with Sun in Sagittarius, Moon in Libra and Ascendant in Aquarius, and Neptune Instrument (Neptune conjunct Ascendant), died in 1745. Swift is best known for his Gulliver’s Travels, the account of a multi-dimensional voyage into other realms, originally titled Travels into Several Remote Nations of the World. A less known work is A Tale of a Tub, which is the story of three sons – representing a trinity of Catholic, Protestant and Dissenter – who misread the text of their father’s last will (Bible) so as to in order to sabotage the original purpose of a coat (religion) left to them by their father (God). The story is repeatedly interrupted by the Hack, the alleged author of the story itself. Swift also coined the term Yahoo, which appears repeatedly in Gulliver’s Travels to indicate a degraded human being. A major feature in Swift’s works is the relevant attention given to excrements, compost and whatever is filthy or degraded. In Gulliver’s Travels, Swift offer regular details of evacuation practices in Lilliput and Brobdingnag, while in Lagado a member of the Academy claims to detect a man’s involvement in plots against the government by examining the physical properties of his excrement: “because Men are never so serious, thoughtful, and intent, as when they are at Stool.” Swift also wrote a large series of excremental poems, such as “Strephon and Chloe”.

C. S. Lewis, (9.3) Irish writer (29 November 1898-d. 1963).  Best known both for his fictional work, especially The Screwtape Letters, The Chronicles of Narnia, and The Space Trilogy, and for his non-fiction Christian apologetics, such as Mere Christianity, Miracles, and The Problem of Pain. “If we find ourselves with a desire that nothing in this world can satisfy, the most probable explanation is that we were made for another world.” “To be a Christian means to forgive the inexcusable because God has forgiven the inexcusable in you.” “Love is not affectionate feeling, but a steady wish for the loved person’s ultimate good as far as it can be obtained.” “Integrity is doing the right thing, even when no one is watching.” “When we lose one blessing, another is often most unexpectedly given in its place.” “The pain I feel now is the happiness I had before. That’s the deal.” “True humility is not thinking less of yourself; it is thinking of yourself less.” “Die before you die, there is no chance after.” “Do not waste time bothering whether you ‘love’ your neighbor; act as if you did. As soon as we do this we find one of the great secrets. When you are behaving as if you loved someone, you will presently come to love him.”

Caroline Myss: (9.3.9) born on 2 December 1952 and double Sagittarius (Sun and Ascendant in Sagittarius) with Moon in Gemini, Caroline Myss (pronounced mace) is one of the better known  authors and workshop leaders in the field of energy medicine and human consciousness, She is also a regular feature in the Findhorn Foundation programmes. Here follow two articles by C. Myss online: Why People Don’t Change.  Why Are We Here? (Caroline Myss talks about agreements we make before birth, and how recognizing them can bring purpose and peace to our lives.); The Nature of Faith. “Fate is how your life unfolds when you let fear determine your choices. A path of destiny reveals itself to you, however, when you confront your fear and make conscious choices.”

Stephan A. Hoeller: 9.3/9.4 (November 27, 1931) American author and scholar of Gnosticism and Jungian psychology, born in Budapest, Hungary into a family of Austro-Hungarian nobility. He is the Regionary Bishop of Ecclesia Gnostica, and the senior holder of the English Gnostic transmission in America. Gnosticism: New Light on the Ancient Tradition of Inner Knowing (2002)

Binary Programme 1 – Pahekarubhe 1: 041298:
Pahai Sadoh holds in its hands two Graha related with the Sun and the Moon. The work involves operating on them with Pahai Sadoh.
I am in the Lower World, at Quiumakai, in a vast area full of attractive objects. There are abundant possibilities and this cause some anxiety. I blow on these objects and from my mouth a strong wind comes out, wiping away all objects. From all these objects that move away in a vortex, a song emanates. I become aware that it is about moving everything away through chanting, releasing Graha by singing.
I see the Spirit of 9.3, the keeper of deep communication. I ask for its support. I drink the potion and I find myself on a raft, moving at high speed on a river. I managed to stop at a point. I see a triple crystal, similar to the one I have.
“This is what you are invited to use in sacred communication. It is also the glyph. Use it”.