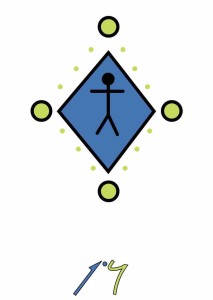 In the Astroshamanic Binary System, Sun in Sagittarius (9) and Moon in Virgo (6) constitute Binary 9.6, or Binary number 102.

9.6 (Sun in Sagittarius and Moon in Virgo) blends mutable fire with mutable earth, integrating all the Sagittarius’s qualities with Virgo’s efficiency, purification, selection and service. This binary has a broad and articulated minds thriving with ideas and ability to implement them. They are master in taking calculated risks, blending attention to details, pragmatism and care with sense of adventure and expansion. They are also most devoted and faithful companions, abundant with unconditional service and commitment.

Sagittarius and Virgo are in a square (90°) aspect. They are both mutable signs, holding a direction and seasonal gateway, West and South, Autumn and Summer respectively. They share the power to ground and bring to a climax the energies they represent, though they may work at cross-purposes and this can cause some significant friction. In ordinary terms these signs appear hard to integrate due to the tension they generate, and yet this same tension can provide the massive force needed for achieving most significant objectives.

“Do not confuse beauty with beautiful. Beautiful is a human judgement. Beauty is All. The difference is everything.” (Matthew Fox, Sun Sagittarius, Moon Virgo)

Astroshamanic Seal: the vision of this seal refers to a vast circle of attractive coloured stones. The circle is a place of immense possibilities, providing a lot of joy and excitement. Each stone has a teaching to offer. I am riding a horse, while singing a song. I notice a stone. I stop and pick it up. It is like an amethyst crystal. Inside the crystal I can its Lord. He says that there are teachings for me. “Somebody needs to take care of these teachings and if you are happy about it, you can be the one.” I agree, yet I ask for more support and acknowledgement. The Lord says that the support and acknowledgement are given. I accept to do the work, yet I stress that I also need acknowledgements, just as He needs someone to put the work together.

Alex Grey, (9.6) American artist 29 November 1953, specializing in spiritual and psychedelic art (or visionary art) that is sometimes associated with the New Age movement.
“The infinite vibratory levels, the dimensions of interconnectedness are without end. There is nothing independent. All beings and things are residents in your awareness.”
“To bare our souls is all we ask, to give all we have to life and the beings surrounding us. Here the nature spirits are intense and we appreciate them, make offerings to them – these nature spirits who call us here – sealing our fate with each other, celebrating our love.”
John Crowley (9.6) (born December 1, 1942) American author of fantasy, science fiction and mainstream fiction. Best known as the author of Little, Big (1981). His novel Ægypt draws on Hermetic Gnostic traditions employed by Renaissance alchemists and magical thinkers as well as a Gnostic conception of history as malleable by human understanding.
“Love is a myth.” Love is a myth,’ Grandfather Trout said. ‘Like summer.’ ‘What?’ ‘In winter,’Grandfather Trout said, ‘summer is a myth. A report, a rumor. Not to be believed in. Get it? Love is a myth. So is summer.”
“The further in you go, the bigger it gets.”

Fritz Lang, (9.6) Austrian-born film director (5 December 1890-d. 1976) with Sun in Sagittarius and Moon in Virgo. He is one of the early film directors who employed striking visual and sound effects, characterized by Sagittarius grandeur and Virgo’s attention to details. His most popular works is “Metropolis”, a stunning drama about a reality set in 2026, one-hundred years from when the movie was made. The inhabitants of Metropolis are divided in two categories: the privileged elite residing on the surface and the lower class living underground to run the machines.

Maria Callas was born on 2 December 1923 with Sun in Sagittarius, Moon in Virgo and Ascendant also in Sagittarius (9.6.9). She is regarded as the most popular soprano and opera singer of the post-World War II period. Maria Callas, also called “La Divina”, was particularly known for her romantic involvement with the Greek shipping tycoon Aristotle Onassis. The rapport ended when Onassis left her for Jacqueline Kennedy, widow of John F. Kennedy.
“An opera begins long before the curtain goes up and ends long after it has come down. It starts in my imagination, it becomes my life, and it stays part of my life long after I’ve left the opera house.”

Matthew Fox: 21 December 1940 (9.6) American priest and theologian. Formerly a member of the Dominican Order within the Roman Catholic Church, he is now a member of the Episcopal Church. Fox was an early and influential exponent of a movement that came to be known as Creation Spirituality. Fox has written 30 books that have sold millions of copies and by the mid 1990s had attracted a “huge and diverse following”. Fox’s “Techno Cosmic Masses” (more recently just called “Cosmic Masses”) are events that attempt to combine the religious ritual of the Eucharist with dance and multimedia material, deejays, video jockeys and rap music. They evoke and connect spiritual rituals and the ecstatic energy of Techno music and rave parties.
“Do not confuse beauty with beautiful. Beautiful is a human judgement. Beauty is All. The difference is everything.”
“Evil is the shadow of angel. Just as there are angels of light, support, guidance, healing and defense, so we have experiences of shadow angels. And we have names for them: racism, sexism, homophobia are all demons – but they’re not out there.”
“I am a Westerner. We’re not going to change the West by going East. The East has a lot to teach us, but essentially it’s like a mirror, saying, hey, can’t you see what’s here in your own religion, what are you, stupid?”
“Beauty saves. Beauty heals. Beauty motivates. Beauty unites. Beauty returns us to our origins, and here lies the ultimate act of saving, of healing, of overcoming dualism.”