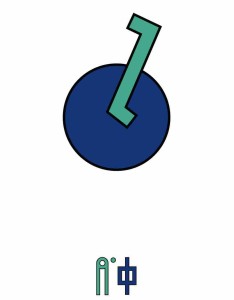 In the Astroshamanic Binary System, Sun in Scorpio (8) and Moon in Capricorn (10) constitute Binary 8.10, or Binary number 94.

This is the binary 8.10, a blend of Fixed Water and Cardinal Earth. The pattern Sun in Scorpio and Moon in Capricorn integrates Scorpio’s intensity, depth, magnetism and passion with Capricorn’s ambition, discipline, practicability and determination. Those who resonate with this combination are most purposeful and committed beings, hard-working and passionate, able to direct abundant energies for the defiant manifestation of enduring intentions. Loyal to their cause, tough, tenacious, stern, they figure out as natural leaders and may pursue any intent they set themselves with ruthless resolution.

Sun in Scorpio and Moon in Capricorn are in a sextile (60°) aspect, which involves two complementary signs, sharing the same polarity, yet not the same element. The binary can work harmoniously and provide beneficial opportunities as long as there is awareness and clarity of intention on both sides.

Astroshamanic Seal: a sphere with a periscope shape within. The seal encourages to unceasingly work to manifest one’s dreams. “You are like a periscope emerging from the bowels of the Earth. You observe what is happening on the surface of the earth.” It promotes the use of all resources in order to attain the final objective: the retrieval and unity of the 12 circles of the 12. “The Earth is a starship and soon it will fly through the dark sky until it will reawaken in total luminosity. It does not matter what happens around. With me all that counts is to be aware of the objective and of your responsibility in the Game. Whatever will happen can only be a source of excitement. All that matters is for you to know your role in the Game.”

George Eliot, (8.10.8) British novelist (22 November 1819-d. 1880)
“It is never too late to be what you might have been.”
“Blessed is the man who, having nothing to say, abstains from giving us wordy evidence of the fact.”
“It will never rain roses: when we want to have more roses, we must plant more roses.”

Handorian States Reference:
United Nations of Handor (UNH) – Frian
Nation of Uskotax
Uskotax is quite a mysterious and remote dark land even according to Frianian standards. It occupies the far north area of the island of Rottlan. The capital is Helix.

8-10-1 Heilrutinilax
8-10-2 Uskotaxartarnox
8-10-3 Urk
8-10-4 Hark, Hulk, Ufuk, Usko
8-10-5 Helix
8-10-6 Undank, Henrik, Hallux
8-10-7 Hauruck, Haddock, Hauberk, Hillock
8-10-8 Havelock
8-10-9 Heuristik, Hosenrock
8-10-10 Harammalik, Holzpflock
8-10-11Urabdimalik
8-10-12 Hadathamalik, Harnaruskork
Guidance:
IP-141196-8.10:
141196: Here you retrieve your divine beauty and your sacred responsibility. You let go of everything else and focus upon your responsibility: energizing the Earth. And all you need to do to support this is to dance with your body, realising that its gentle touch provides a massage to the surface of the Earth. Through the movement of your joints and their contact with the Earth, you offer great amounts of energy, and in doing so you experience enormous joy. You are grateful for the responsibility given to you. It is out of your enjoyment that you give energy to the Earth and its inhabitants. This provides immediately an euphoric ecstasy. You acknowledge that there is no other role but this: energizing the Earth simply through your movement, moving your knees, up and down, and in all directions, feeling your feet, moving your hands and all bones. Your skeleton moves with joy and connect with the structure of the Earth, becoming one with it. Sheer joy! This is all you are meant to do. Out of this determination something will manifest, yet you are not concerned with it. You connect with the Earth and the Earth takes care of yourself, while it feels your support. Dance! Take your stones with you and dance with them. Keep the obsidian in your right hand. Always remember that when you experience ecstasy Graha will come. Welcome them with joy for this is also part of your responsibility. Invite them to take part in the dance. This is the most important moment: the invitation. Here you include everything and acknowledge the sacred nature of everything. Heal! Touch the obsidian and become available to healing the Graha spreading your light everywhere. Then you can take in you left hand the double crystal and start a more subtle healing process.
IP-161196-8.10:
The Spirit of S10 requires the offering of every articulation and structure. I offer it my skeleton structure through the dance and the immobility. Each bone becomes an expression of S10, an emanation of discipline, structure, organisation, determination, Intent, concrete results, employment of resources for the creation of sacred objectives.
My entire skeleton structure is used for this purpose. I heal with it every grievance connected with S10. I’ve got a dream. It has been there for ages. I’m determined to take it out and spread it all over. That’s my Intent. I meet the Spirit of S10. It asks me to follow it through a cavern leading to an ascending path. There are many carriers with donkeys. We overtake them and then reach a peak, from where we can see a wonderful Centre. “Are you ready to take responsibility and be involved in this project?” I say “Yes”. “Work on the 12 and meet each Force and Guide.”
Pahekarubhe 1: PR – 261098-8.10
“You are like a periscope emerging from the bowels of the Earth. You observe what is happening on the surface of the earth.”
I move into Quiumakai with the Guide in luminous conic shape. I find myself in the cave of sector 8. I move close to the opening and take hold of its rocky walls. Below there is a deep precipice, yet my grasp of the rock is firm and safe. It is as if the rock is holding me. I see distant worlds. From the clouds a hand with the potion is unveiled. It is the binary. The peak of a mountain approaches. A bridge opens up and I move into the peak, which them moves, reaching what the earth will be in the future.
“Work unceasingly for your dream. This binary supports the Game’s goal of unity: the retrieval of the 12 circles of the 12. For this purpose it uses whatever. From its periscope it gets an ample vision. It sees the squads gathering and arriving together in Rodnah and then leaving for Handor. In Rodnah there is the gateway, which allows to move speedily to Handor.
“I am the binary 8.10 and guard upon the power to employ all resources in order to attain the final objective: the retrieval and unity of the 12 circles of the 12. I am the custodian of the sacredness of this secret. The Earth is a starship and soon it will fly through the dark sky until it will reawaken in total luminosity. It does not matter what happens around. With me all that counts is to be aware of the objective and of your responsibility in the Game. Whatever will happen can only be a source of excitement. All that matters is for you to know your role in the Game.”
ITALIANO: