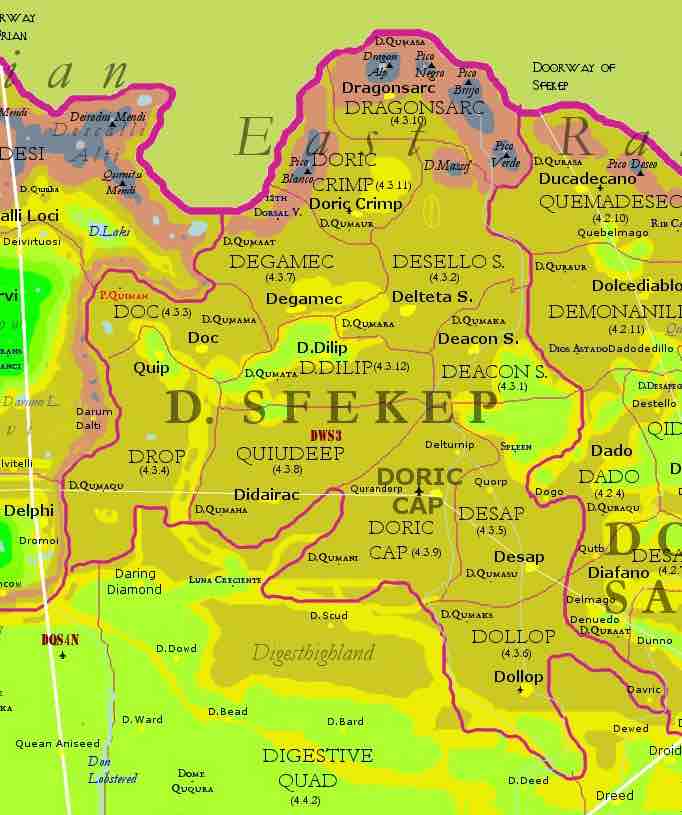 Domain Sfekep is the nation of the masters in astroshamanic games, story-telling, epic narrations, and whatever involves the use of hands and nipples. As a matter of fact, they play a major role in the formulation of the legendary Epic of the Sacred Cone, not to mention the Game of the Sacred Cone and the glyph of the traditional cone inside the hand.

As you may recollect, if you read the Abridged Compendium of the Game of the Sacred Cone,[i] the primary characteristic of Handorians is their passion for games and story-telling. Before the unveiling of darkness, they could only conceive luminous games and stories. Yet, as soon as the idea of darkness emerged, although Handorians did not have any clue about its connotations, they immediately incorporated it into a novel luminous game.

It was called the Game of the Sacred Cone. Appropriate arenas were erected to play it. There, thanks to a contrivance called Sacred Cone, it was feasible to captivate and emit 12 types of darkness. At a certain stage of the Game, often just for a few instants, the whole perimeter of the arena would sink into a 12-fold unmitigated condition of obscurity. That was truly an unprecedented occurrence for the Handorians.

In those exceptional circumstances they would convene in earnest immobility, amazement and taciturnity. Then, when the darkness was over, the Handorians could chortle at the weirdness of such an experience.” The point is that darkness was extremely scarce on Handor.

The success of the Game caused an impetuous solicitation for darkness, so that after some time Handorians were faced with the dilemma of how to get more darkness. Although all Handorian States abundantly contributed ideas and insights, it was in the state of Quald, and more precisely in the Nation of Sfekep, that the ultimate inspiration matured. Hence, the state of Quald, and precisely its celebrated Haragoxian dark rock (the Dark Rock of Kallex), became the training centre for the Handorian Pioneers of the Sacred Cone (The Developers), who then moved into the Grey Sphere and brought about the multi-dimensional account we are all currently caught up in.

Sfekepic qualities can be pragmatically employed in order to weave most overwhelming, compassionate and inexpressible emotions into lucid articulated forms. Hence, if you ever go into such emotions, and feel worn to shreds by the incapacity of delivering them, well, call upon Sfekep. Use your hands and nipples for this purpose!

Simply allow your hands and nipples to transmit the profound desire to communicate your awesome passions. Hands know how to do it. Indeed, they do it all the time. What else could they do? Hands are the messengers of chest and mammary glands. They carry on their work anyway, undisturbed by the activity of our human autistic mind. Employ your hands to invite Sfekepic beings!

The traditional fashion involves placing the hands on your nipples, allowing the centre of the palm to tenderly interact with the areola[ii] and the nipple. The interaction is still, which means that you do not stroke your nipples or apply any form of direct stimulation. Hold your breasts in this way for a few minutes, as you connect with your Intent and call upon Sfekepic beings or your Guide. Then continue to hold your breasts, yet by slightly detaching your hands and creating a gap of one or two centimetres between your hands and your breasts or nipples.

This practice allows your subtle and multi-dimensional mammary glands to enlarge and become active, which may also have visible effects on your physical breasts. Continue to hold your breasts, together with the awareness of your nipples operating on the palms of your hands, yet without direct physical contact. Then, detach your hands and place them in front of you with the palms outward, using them as extensions of your breasts, secreting and dispensing nourishments. In this process, please be also aware of the inner mechanics of your breasts. Identify the series of tubes radiating from the nipple, perceive the nodules on your areola and its glands under the external skin, and tap further into the core emanation residing at the centre of your chest.

This is the tender cavity of the Sacred Cone, the point of vertical alignment of heart, belly, head, i.e. the multi-dimensional gateway to the three shamanic worlds and the multidimensional realms.
Remain in such energetic awareness for a few minutes. Then, out of the blue, get down to work. Allow the hands to express. Grab a piece of paper and write, draw, jot down notes, articulate whatever comes to your mind. You can also touch, physically or energetically (through the void and without physical contact), as many objects, people, animals, plants and stones as possible.

Simply allow your passion to flow through your hands and nipples. As this happens, be aware of the activity of your mind, watch out for any deep insight, align with your loving ancestral cerebral functions and allow them to find expression through your hands. Also notice the effects that this interaction has on the environment. At the same time, disregard the conditioning of your ordinary mind. Your overwhelming passion is there to be shared, it is the gift you can dispense to the world, cherished nourishment for a famished mankind. Let it flow through your hands, emanation of superb multi-dimensional nipples and breasts.

One of the major qualities of shamans involves managing to translate apparent chaos and puzzling random events into something that makes sense. Unlike ordinary people, they are capable of detecting meaning from accidental or physiological events. The chief methods used in this context are story telling and game-playing, i.e. employing the power of imagination in order to translate the shaman’s multidimensional perception into fiction stories and games which are understandable for the life of ordinary people.

Sfekepic shamans are carriers of sacred games, which they articulate through rituals, healing dramas, storytelling and breast-hand activities. A wise shaman is aware that the rules of the game are subject to the priority of achieving a healing end result, of which the players may not even be conscious about. In this context, tricks are plausible as long as they go unnoticed and provide excitement.
The capital of Sfekep is Doric Cap, which is the place where Kurandah’s first conic cap is kept.

The Trinities of Domain of Sfekep