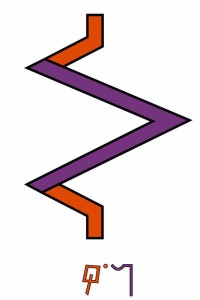 In the Astroshamanic Binary System Sun in Taurus (2) and Moon in Aquarius (11) constitute Binary 2.11, or Binary number 23.

This binary is the realm of ground-breaking pragmatists, with the ability to inspire and lead people, politically and socially, and manifest potentials of high integrity, though at times controversial and unconventional. Realistic and innovative, cautious and rebellious at the same time, they have the capacity to consolidate multidimensional values, implementing them in most productive forms.

Taurus and Aquarius combined develop the power to create solid connections between our multidimensional nature and the third-dimensional, physical reality, translating the unseen into visible expressions. It is shamanically related with the capacity to sink into the depth and core of the earth, accessing the gateway to the sky. It involved transcending physical reality by moving totally in it. The tension generated by the square aspect between the two signs can be a portal into the mysteries and paradoxes of our true nature.

Taurus and Aquarius are in a square (90°) aspect. They are both fixed signs, holding the core essence of the direction, season and element they represent, East and North, Spring and Winter, Earth and Air respectively. They share the power to reach a climax and ground it, though their energy works at cross-purposes and this can cause significant friction. In ordinary terms these signs appear hard to integrate due to the tension they generate, and yet this same tension can provide the massive force needed for achieving most significant objectives.

Astroshamanic Seal: a vertical aquarian wave, consisting of an expanded “V” shape. The vision involves a being faintly moving through clay, with lowered hands, who then rise the hands, receiving the light of the Sun and the stars. All he/she had to do was to rise the hands, so as to receive abundant energy. This seal relates with the construction of the astroshamanic drum, a tool aimed at connecting the stars with the earth, our multidimensional nature with our physical life. The seal is drawn on drums playing this function.

Another vision associated with the seal explains the nature of the vision themselves. I am invited by the council of the 12 Spirits. “You have received the content of an ancient tradition” they say “reaching you through a language understandable for your system, so that it can be used in the time frame you are in. We gave you a structure that allows you to receive the vision. The potion is ours, while the vision is yours. The potion comes from Quiumakai, while the vision is the product of the encounter between you and the potion.”

The potion for 2.11 is green and fizzy. Its liquidity appear to evaporate almost immediately. As I drink I feel the liquid as well as the air. It reminds me of the subtle breath typical of Aquarius, which is the way the people of Quiumakai breathe. They filter the subtle breath which is below the earth.

The vision involves reaching the centre of the earth, where there is a dimension that allows access to Heaven. There I can see a luminous starry sky full of angelic beings. Then I meet the angel of the earth, a most beautiful lady with whom you can relate. There is an element of risk here. You are aware of the purpose of matter, what matter allows access to. You can go beyond or stay where you are. On one side the security of the earth, on the other the wonder of the sky.

2-11 STATE OF BRENTO,
NATION OF BAPIANY

The Trentian Nation of Bapiany (Naipa in Rodnah and Apina in Pahai) is located in the North-West of the Handorian State of Trent, bordering the Ukar Nation of Veridhan. The capital is Bapian Hill. The main Cone Squads is Apian, operating in the Handorian States Premier League. Other relevant squads are Ra Pidren and Camp Lanim. It is associated with the Binary 2.11 (Taurus-Aquarius) and through Apina with the French regions of Auvergne and Limousin (D2-11).