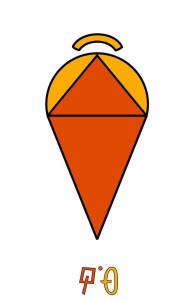 In the Astroshamanic Binary System Sun in Taurus (2) and Moon in Cancer (4) constitute Binary 2.4, or Binary number 16.

Those who resonate with this combination are profoundly devoted to family or tribal traditions, with the capacity to hold the basic essence of their lineage and firmly sustain it through the challenges of life. Reliable, determined, caring, imaginative and fertile, they are endowed with the gift of transforming emotions into artistic achievements.

Sun in Taurus and Moon in Cancer are in a sextile (60°) aspect, which involves two complementary signs, sharing the same polarity, yet not the same element. The binary can work harmoniously and provide beneficial opportunities as long as there is awareness and clarity of intention on both sides.

Astroshamanic Seal: a conic shape, consisting of two joined triangles of different shapes and an upper semi-circle surmounted by a curved line. All astroshamanic seals also represent connections between parts of the body, and their multidimensional association. This seal relates mouth and throat (Taurus) with stomach and breasts (Cancer). All grievances, including physical ones, are connected with the interaction of the binaries. The seal heals the nourishing process, the way we incorporate and integrate the resources we acquire.

David Vaughan Icke: (2.4.7) born in Leicester (England) on 29 April 1952, with Sun in Taurus, Moon in Cancer and Ascendant in Libra, Uranus Vessel (Uranus conjunct Moon), Neptune Instrument (Neptune conjunct Ascendant), is one of the most controversial contemporary non-ordinary writers. Former professional football player, television sports presenter and British Green Party national spokesman, in 1990 he received guidance to delve into a full investigation of non-ordinary activities and promote healing on earth. He was also told that one day there would be a huge earthquake and the “sea will reclaim land” due to human abuse of earth. His researches allege to prove that the world has been ruled by a secret group called “Illuminati”. In The Biggest Secret he maintains that the world is controlled by a race of reptilian humanoids, and that many relevant public figures are actually “reptilians,” including Queen Elizabeth II, George W. Bush, Henry Kissinger, Tony Blair, Silvio Berlusconi, Bill Clinton, Winston Churchill, Robert Murdoch, Al Gore and practically every world leader. These reptilians are involved in unmentionable activities, ranging from human sacrifice, blood-drinking and human mass exploitation. After being widely ridiculed, he disappeared from public view. For many years people would point and laugh at him, and this experience helped him find the courage to develop his ideas. Icke has published 15 books and he is undoubtedly the main the most popular of conspiracy authors. At the heart of his vision is the belief that the world is being controlled by a secret government and that ordinary people are being massively manipulated at every level. This government arranges for incidents to occur around the world, which then provoke a response from the public, allowing those in power to do whatever they had planned to do in the first place. Icke refers to the Holocaust, Oklahoma City bombing, the bombing of Pan Am Flight 103, the war in Bosnia, and the September 11, 2001 attacks as examples of such events. Icke also maintains that people have a “multi-dimensional consciousness”, which has been blocked by the bogus reality that the secret government (reptilian-human in nature) has installed. “My own research suggests that it is from another dimension, the lower fourth dimension, that the reptilian control and manipulation is primarily orchestrated. Other people know this as the lower astral dimension, the legendary home of demons and malevolent entities in their black magic rituals …” According to Icke, the reptilian-human DNA allow a shape-shift from reptilian to human form whenever these creatures consume human blood.

2.4 STATE OF BRENTO, NATION OF BONDLAND

Situated in the east-central area of the State of Brento, bordering the State of Yukal, this is the largest nation of the State. Its territory is divided into two parts, the north, consisting of vast flat lands and fertile fields, and the north, combining flat lands with minor low hills and some lakes in the south-east. This nation is a climax of care, devotion, nourishment and protection. The capital is Bond, seat of the Archvicary and the nearby Osantamater Jade Mandrent, the temple of the national saint, a vast earth dome covered with shining diamonds. The trinity of Bond Pahaid (2.4.11) is one of the most significant Sacred Cone resonator, also hosting the Bondah Pahaid a healing network of channels.