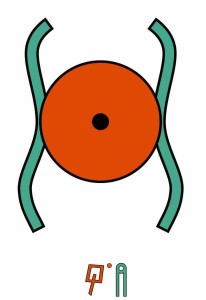 In the Astroshamanic Binary System Sun in Taurus (2) and Moon in Scorpio (8) constitute Binary 2.8, or Binary number 20.

This binary inspires dramatic, forceful and charismatic beings, with a firm trust in themselves and an unbending adherence to their higher intent. Sun in Taurus and Moon in Scorpio generates a fertile setting for any enterprise involving the use of life force and sacred power. This allows motivated individuals to face risks and confront challenging situations as a way of strategically testing their Intention.

Binary 2.8 is related with sacred sexuality, tantra and a path of deep involvement with the driving force of the web of life. This involves physically and intimately engaging with deep feelings and emotions, root desires and intentions, unveiling  totally what is hidden and learning to master it completely.

The Sun in Taurus and the Moon in Scorpio form an aspect of opposition (180°), combining two fixed signs opposing each other. This brings about a major magnetism between two adamant natures operating in distinct fields, which can either cause extreme tension or manifest amazing creative achievements.

This is a Full Moon Binary, with the Moon being on the opposite side of the Earth from the Sun. The Full Moon is the culmination of the intentions set on the preceding New Moon (Binary 2.2). The qualities of both Taurus and Scorpio build up, gathering and concentrating energy aimed at prompt creative expression. The Taurus part stresses the pragmatic, physical and constructive side, while the Scorpio element emphasises the deep emotional and transformational currents constituting the materia prima of any relevant manifestation. In this context intense emotions covering an ample range of frequencies can easily erupt, and can either be released for the general highest good or directed towards specific practical achievements.

The Full Moon in Scorpio is known in the Theravada Buddhist countries of South East Asia as Wesak: the birthday, enlightenment and entry into Nirvana of Buddha. In this respect it is considered as the most powerful Full Moon of the year.

It was on the night of the Full Moon in Scorpio that Buddha sat under the Bodhi tree at Buddhagaya and attained total enlightenment. According to esoteric traditions the Buddha returns at this time every year to dispense healing light to the world. Spiritual masters led by the Christ gather in the Wesak Valley, a mythic multidimensional location in the Himalayas, position themselves in a vast pentagram, while the Buddha radiates light.

It is believed that during the five-day period of the Full Moon, which includes two days before and after the day of exact Full Moon, direct contact can be established with the Great Masters and the Forces of Light that hold the planet. When a sufficient number of people come together, connecting personal with collective history and aligning with luminous intent, this strengthens the foundations for the expansion of human awareness and the reawakening of our multi-dimensional nature. In this respect all group meditations and rituals, sustained by a clear collective intent and inspired by a healing basic purpose, provide major benefits to the human and general environment.

Here any activity can indeed be transformed into a meditation or ritual, especially those involving expression of vast amounts of energy or significant transformational processes, such as eating, going to the bathroom, being sensually involved, etc.

What counts, as often as possible, and in any circumstance, is to keep the connection with the web of life, reminding ourselves that no matter what feelings we experience, we are always part of the whole, which means that even though we may appear separate and disconnected, the reality is that we belong to this universe to which we continue to give our precious contribution. Unveiling, understanding and accepting the nature of such contributions involves reawakening our memory, releasing the veil of autistic illusions that keep beating us up and fully embracing what we truly are.

On this Full Moon in Scorpio seekers throughout the world join in meditation or ritual events, releasing the veil of their limitations and becoming receptive to their multidimensional nature. The day of this Full Moon is known as the Day of Safeguarding, which involves holding the energy generated by the alignment with our multidimensional nature. The two days following the Full Moon are called the Days of Distribution, implying passing on the accumulated energy to the web of life.

Astroshamanic Seal: a circle with a central dot, with one undulating vertical line on both sides, exemplifying the light of the Full Moon being grounded upon earth, giving shape to a bardo dome of radical and healing transformation. Beings enter this space, forming two long lines on both sides, and once they are inside their grievances are ultimately released. Upon exiting they can finally move along their true luminous destination.

“It is not to be thought that the life of darkness is sunk in misery and lost as if in sorrowing. There is no sorrowing. For sorrow is a thing that is swallowed up in death, and death and dying are the very life of the darkness.” (Jakob Boehme, 2.8)

“We have repeatedly observed that while any whole is evolving, there is always going on an evolution of the parts into which it divides itself; but we have not observed that this equally holds of the totality of things, which is made up of parts within parts from the greatest down to the smallest.” (Herbert Spencer, 2.8.10)

“The ultimate result of shielding men from the effects of folly, is to fill the world with fools.” (Herbert Spencer, 2.8.10)

“You can’t stop the waves but you can learn how to surf.”  (Swami Muktananda)

NATION OF BILTOH
This nation is situated in the south-east area of the State of Brento, north of the nation of Osanbeak, bordering the State of Yukal. Its territory is a mixture of plains in the north and of hills of increasing altitude as the land progresses in the south. The capital, Biltoush is the seat of the Archivicary of Biltoh.