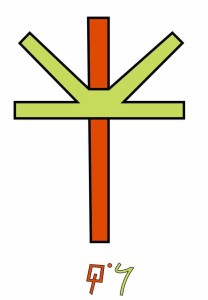 In the Astroshamanic Binary System Sun in Taurus (2) and Moon in Virgo (6) constitute Binary 2.6, or Binary number 18.

This combination has a profound connection with the physical body and the physical environment, with a natural propensity for manifesting concrete results and providing useful services.

Taurus and Virgo are in a trine aspect, which produces an easy, balanced and mutually supporting link between the signs involved. This can bring major benefits when there is clarity of intent and focus. If this is not the case the benefits may develop unconsciously and gained by whoever holds a clear intention. There is a great potential of manifestation during these days, with the possibility of taking fruitful actions for yourself and others. The only difficulty is about having the courage to take the initiative, to move and do it, then things are likely to flow very easily.

In particular, the invitation is to be aware of the physical reality around us, interrupting, at least for a few instants, the constant inner dialogue that defines and labels whatever we see. We can learn to listen, placing aside our personal history and ideas, allowing the physical world, including our bodies, to speak, even if we don’t understand the language.

“When we concentrate on a material object, whatever its situation, the very act of attention may lead to our involuntary sinking into the history of that object. Novices must learn to skim over matter if they want matter to stay at the exact level of the moment. Transparent things, through which the past shines!” (Vladimir Nabokov, born with Sun in Taurus and Moon in Virgo)

Image: by Gianfilippo Usellini, born with Sun in Taurus and Moon in Virgo, Italian painter.

This binary has a profound connection with the physical body and the third-dimensional environment, with a natural propensity for manifesting concrete results and delivering most useful tools or services.

Taurus and Virgo are in a trine aspect (120°), which produces an easy, balanced and mutually supporting link between the signs involved. This can bring major benefits when there is clarity of intent and focus. If this is not the case the benefits will develop unconsciously and gained by whoever holds a clear intention.

Binary 2.6 can provide major services to the world and a most relentless setting for successful manifestation, as long as the resistance towards taking the initiative and getting started is overcome.

Astroshamanic Seal: a vertical and horizontal line crossing with a “V” shape pointing on cross-line, giving the expression of a sacred tree. It indeed represents a luminous hand emerging from below, bestowing a luminous flame, which does not appear in the seal. Whatever happens is the reflection of something within ourselves, which we need only to acknowledge, without doing anything. Let everything and everyone pass, knowing that the flame is always there. The flame is the sacred awareness, the Core Multidimensional Identity, the light of the world. Though you may not see it, it is always there.

This nation is situated in the south-west area of the State of Brento, bordering the State of Frams and the Confederation of Tudorian Principalities. It is a most significant nation from the Provisional Delegate Bureau perspective since it is the ancestral abode of His Heinousness Alexander Franciscus de Saint Bogus. The territory of Odrams consists of low valleys and minor hills in the north, increasing in altitude as they reach the central-south area and developing in plateaux, such as the Western Handorian Plateau (Handoropramauna) and the Dramtian Hills (Dramtilrans) with significant elevations in the south.
The national capital is Ops, bordered in the west by the breathtaking Odramse Gardens, seat of the Archivikary of Odrams, and celebrated for its long columns and temples.
The trinity of Odra Domain Bogus (2.6.5), whose head city and vicarage is Bogus, is a major Provisional Delegate Bureau training centre and the original heritage abode of the PDB Supply Vicar. At its centre stand the major elevations of the Odra Mountains, including an out of bound area, managed by the PDB.
Further vicarian cities are Bacchants, Besdamandes, Bras, Odrengrais, Odrubis, Oeuf de Drams,
The trinity of Baltis (2.6.6) and Baroness (2.6.8) are particularly known for their refined multi-grapes used by the hero Ballants to produce its epic ecstatic elixirs and wines.