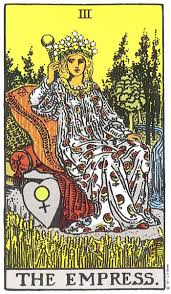 In the Rider-Waite-Smith deck, the card of the Empress depicts a regal woman with ample vestments, wearing a crown of twelve stars on her head. She sits near a heart-shaped shield with the symbol of Venus, holding a rod surmounted by a globe with her right hand. There is a field of corn ripening in her foreground, while in the background there are trees and a river.

In ordinary tarot readings the Empress traditionally refers to love, pleasure, passion and relationship. For a man the card may show the type of woman or physical feminine energy he feels more attracted to, whereas for a woman it may represent the particular feminine archetype she identifies with or aspire to. The Empress also relates to how we connect with physical life, especially with regards to the capacity of enjoying earthly experiences and the ability to bring to manifestation our aspirations. In readings it may indicate a time when we face life through feelings, physical involvement and pleasure rather than through mental activity, and also a period of strong passions, which can be sexual or maternal.

From a less ordinary perspective the Empress represents Nature, and the experience of being sensitive to all the patterns of the earth and elements as they are reflected in the cycle of the seasons and whatever surrounds us. The Empress portrays an ancient and sensuous spirituality, which is not based on doctrines or sacred texts, and develops simply out of a deep connection with Nature. Its common feature is a profound respect for all living creatures and things, and a sense of reverent wonder at the beauty of the earth. This includes animals, plants, trees and the hidden mysteries of the landscape, the sky and the stars, altogether experienced as a deity itself, which is what the Empress primarily depicts. Life calls to Life, through the melodies orchestrated by the earth, the wind in the trees, the taste of fresh fruits, the sight of blossoming flowers, it bestows its gifts at every turn.

The Empress is the best exemplification of the life force that manifests all creation and of Mother Nature herself. She holds the phallic rod in her right hand, portraying the intention to be fertilised and then pursue her gestation till complete earthly fulfilment. Her womb is fruitful and generous in manifesting all features of physical creation, as represented by the natural cycle of the twelve zodiac signs, with which she is crowned.

The Empress confers the gentle, benign and sensual aspects of manifestation and involvement with physical reality. In her realm everything is acknowledged according to its most direct relationship to the physical dimension. There is no space for abstractions and intellectual considerations. Everything is seen in a factual way as either black or white. What counts is only the tangible reality that is accepted by most human beings. This represents a test zone for mystics or very idealistic people, as it confronts them with their physical presence and data that can only be measured and touched at the level of pragmatic experience.

A.E. Waite describes the Empress as the inferior Garden of Eden, the Earthly Paradise, not Regina Coeli (Queen of Heaven), but the refugium peccatorum (shelter of sinners). This trump portrays the complete acceptance of the natural world and the passionate attitude to life. In this respect there is no way we can transcend the physical reality unless we are able to have a full experience of the physical world. “Therefore the first step to enlightenment is sensuality. Only through passion, can we sense, from deep inside rather than through intellectual argument, the spirit that fills all existence”.[i]

The life of Siddharta Gautama (the Buddha) is a perfect example. The path that led him to enlightenment was not the result of sacrifice or repression of material life. On the contrary, it was the outcome of a spontaneous dissatisfaction stemming from 29 years spent in a most wealthy and pleasant environment. According to Buddhist traditions Buddha was born in Taurus and also achieved enlightenment on a full moon with the Sun in Taurus.

For the introductory article to this series please click here.

[i] Rachel Pollack, Seventy-Eight Degrees of Wisdom: A Book of Tarot, Part I, p. 42